‘Unexpected Pucci’ Book to Be Unveiled in Florence

Published by Rizzoli, the book will be presented with a special installation at Palazzo Pucci on June 12 and be available in the U.S. and Europe starting in September.

MILAN — The title of the book says it all.

In curating “Unexpected Pucci,” Laudomia Pucci’s wish was to present a facet of the brand beyond fashion — one that may not be so obvious and widely recognized. In the book, the image director of the label offered a new take on the world and lifestyle her father Emilio conceived and that has been further developed under the LVMH Moët Hennessy Louis Vuitton umbrella.

“When I started to catalogue everything for the Heritage Hub at Palazzo Pucci with the help of young students, I realized there was so much modernity in these storied pieces,” said Laudomia Pucci. “In my mind, I remembered about 20 rugs, and in the end I found 70. I realized it was all much more expansive that I thought — and I am [Emilio Pucci’s] daughter,” she marveled. “I can imagine how this must all be new to the man on the street.” 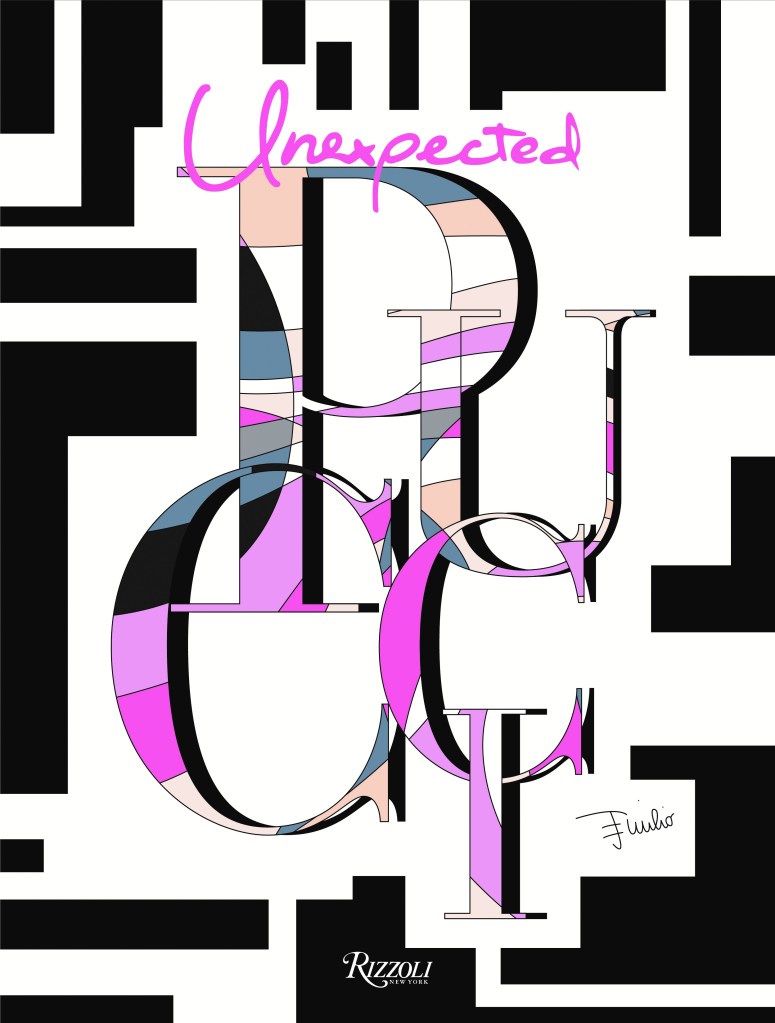 When Pucci received a call from Rizzoli with the idea for a book, she realized she did not want to do a monographic tome. “I thought it would be better to explore Pucci’s foray into art and interior design, which are not usually associated with the brand.”

This translated into a selection of images of a number of collaborations from the Sixties onward.

Ceramics were made in collaboration with Rosenthal, including the Quadratini coffee and tea sets in a black-and-white palette, “unexpected for Pucci,” she said. 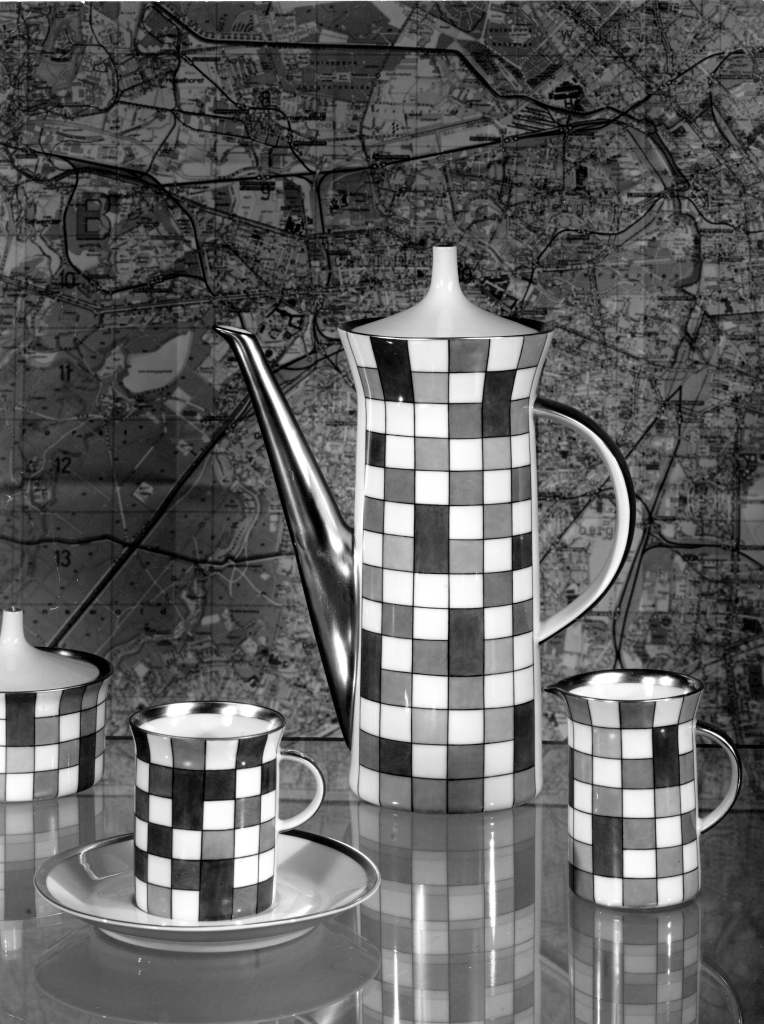 Other collaborations included the Madame chair designed by Philippe Starck with Kartell; the “Cities of the World” Matteo Thun coffee cups for Illy; the Cappellini swivel armchair Rive Droite designed by Patrick Norguet and upholstered in catchy and colorful Pucci patterns; collectible vases with Rosenthal, or the poolside collection by Piero Lissoni. With Bisazza, Emilio Pucci turned prints into handmade decorative panels for interiors and swimming pools.

The foulard — a staple in Pucci’s collections — was a “logical and organic” cornerstone, said Pucci, but “how unexpected was it to wrap up the Florence Battistero [baptistery]” with Emilio Pucci’s 1957 Battistero foulard for an artistic installation in 2014.

The rugs, which were the starting point, were exhibited in 1970 at the National Museum of Decorative Arts in Buenos Aires, and are now available as bespoke pieces at the Heritage Hub. The archival motifs are picturesquely named Ovals, Hawaii, Occhi [Eyes], Garden, Lamborghini and Menelik, to name a few. 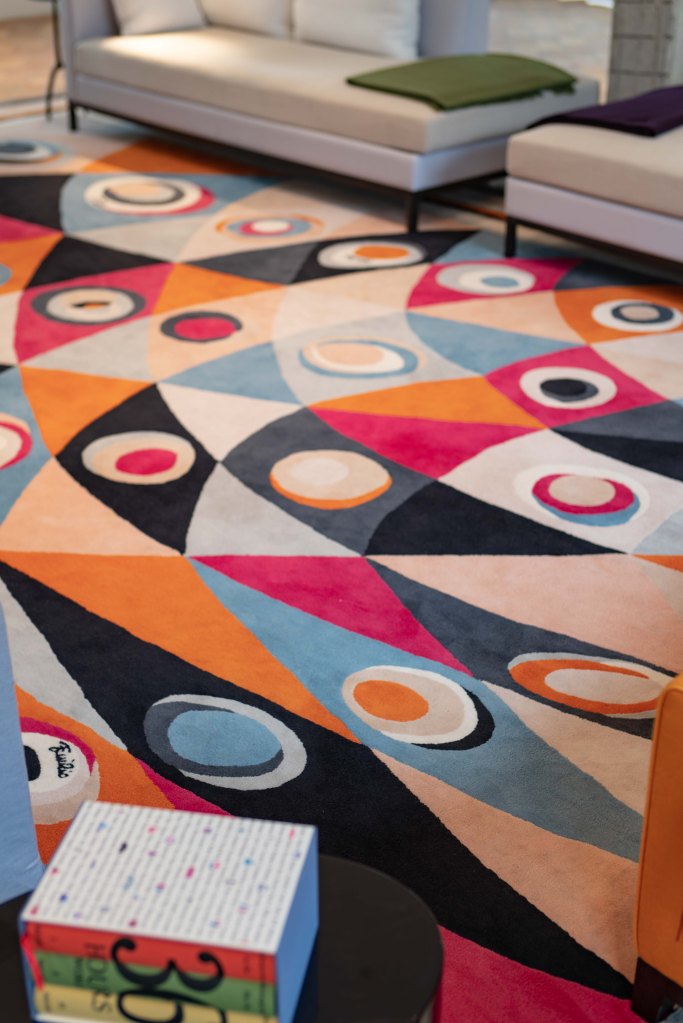 Pucci worked on the book for a year, and the experience clearly left a mark as she saw all these key pieces together. “Emilio Pucci was there before the others, as usual,” she trumpeted.

Retailing at 90 euros and $90, the book will be introduced at Palazzo Pucci on June 12 during Pitti Uomo and will be available in the U.S. and Europe beginning in September.

To celebrate the launch, an installation will be set up at the Heritage Hub in Palazzo Pucci where elements from the book will be shown in a labyrinth inspired by the graphic Torre print. There will be never-before exhibited artworks inspired by the founder.

Although highly visual, the book also has contributions by the likes of designers and artists who have worked with Pucci, including Piero Lissoni, Francesco Vezzoli and Joana Vasconcelos.

Last year, the 13th-century building in central Florence Palazzo Pucci was unveiled after a yearlong remodeling during Pitti Uomo and billed as the Emilio Pucci Heritage Hub. Laudomia Pucci said she knew she did not want it to be a museum, but rather wished it to become a center that chronicles and catalogues the story of the brand and Made in Italy production.

The palazzo officially opened its doors again with the installation “Bonaveri, a Fan of Pucci,” a partnership with the Milan-based mannequin producer Bonaveri.

Established in 1947, Emilio Pucci is one of Italy’s storied jet-set brands of the Sixties, synonymous with dazzling prints on silk jersey, which the founder even applied to skiwear early in his career, pioneering a lifestyle approach to fashion. 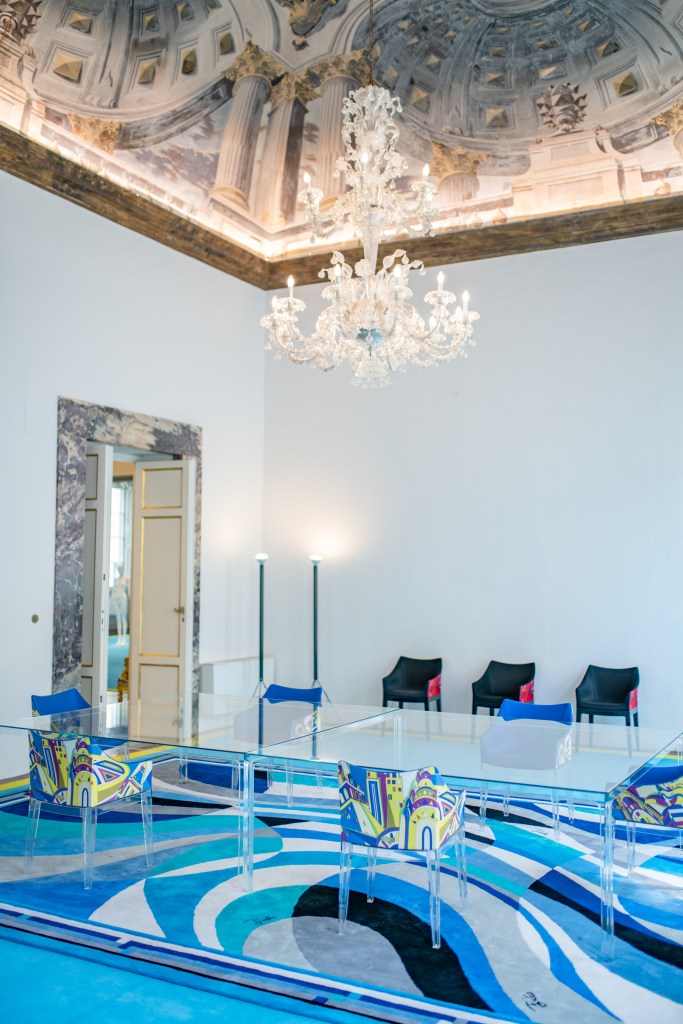