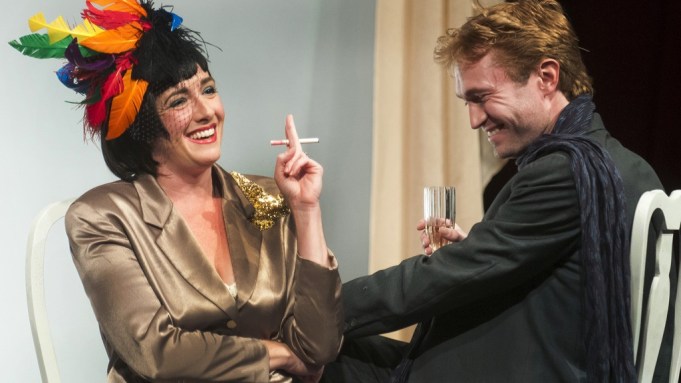 Miami seems like the last place that a play about the troubled British fashion editor Isabella Blow would come to light. Yet Jessica Farr, a 23-year-old native of the city more known for clubbing than culture, has taken on the subject in her new work, “Blow Me.” Mad Cat Theatre Co., which the playwright and actor joined at the age of 16, produced the nearly sold-out show starring Erin Joy Schmidt, which ends its brief run on Sunday at the SandBox at Miami Theater Center. English and Scottish troupes have already expressed interest in staging it, a request that should escalate when Somerset House exhibits “Isabella Blow: Fashion Galore!” in London in November.

Farr discovered Blow through friends in the fashion industry while she studied at Fordham University in New York, as well as the Costume Institute’s Alexander McQueen blockbuster show. Blow’s cameo in “The Life Aquatic with Steve Zissou” really made her fall for the odd bird of paradise, outrageous headwear and all.

“I had to know more about her life with its endless anecdotes and ups and downs,” said Farr, who devoured biographies and coffee-table books such as “Blow by Blow” and “Isabella Blow: A Life in Fashion,” among others. “There was too much great material to fit into an hour and 20 minutes, so sadly, some nuggets like when she worked in a scone shop or when she fancied herself a bullfighter didn’t make it into the script.”

The play is set in the 24 hours leading up to Blow’s death in 2007, as she lies in a hospital following her seventh, ultimately successful, suicide attempt. While she drifts in and out of consciousness after drinking weed killer, factual flashbacks mingle with delusions in a fast-paced, wickedly biting black comedy whose panoply of characters come and go as quickly as fashion trends. The production is anchored by the perfectly cast Schmidt, who’s onstage the entire two acts. Layered with voice-overs and music, the barrage of stimulation evokes the era of smart TV translated for theater.

“I didn’t want it to be just a laugh fest. It was important to celebrate her as an artist who was overlooked and never quite found her footing familially or professionally,” Farr said.

The spotlight shines on Blow’s protégés — Alexander McQueen, Philip Treacy and Sophie Dahl as a clueless newbie experiencing her first modeling session with Mario Testino. Like an episode of “This Is Your Life,” other guests include Blow’s husband, Detmar, and the distant, judgmental mother who abandoned her, amongst a rogue’s gallery of other fashion insiders.

Actors play up to six roles each, a challenge to costume designer Karelle Levy on top of the spartan budget of $1,500. Luckily, the Miami-based knitwear designer was in London when she got the gig and loaded up on pieces like leather and sequined jackets from Brick Lane boutiques. For Blow, who wields an electronic cigarette like a protective magic wand against the kiss-kiss crowd throughout the performance, she fashioned a hat, another signature Blow shield, of multicolored feathers to wear with a fur coat found at Goodwill, not exactly an easy feat in Miami, and one of Levy’s own creations, a black and gold Lurex maxidress.

“It’s a lot like ‘Sex and the City,’ where clothes and accessories play a supporting role,” said Levy, whose favorite costume capped with a pom-pommed face mask is inspired by Leigh Bowery’s outré looks. “Some actors layer three costumes, so Velcro definitely became my all-purpose duct tape.”

The play culminates in a blowout, no pun intended, between the Blows.

“She lived in a self-created circus that didn’t have public and private boundaries, but it was an art form nonetheless,” said Farr, who ends the performance with Blow’s lines “Who am I without the spectacle? Nothing. Who really lives without it?”