The legendary golfer stopped by to sign copies of his new book, “The Timeless Swing.” 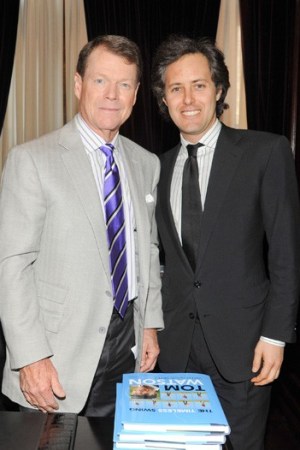 Tom Watson took a break from his preparations for next week’s Masters tournament by stopping by the Polo Ralph Lauren men’s flagship store earlier this week.

The legendary golfer, who has racked up 39 PGA wins in the course of his 40-year career, was shopping for some new spring togs and also signing copies of his new book, “The Timeless Swing.”

Watson, whose swing has actually improved with age, is eager to share the lessons he’s learned with anyone willing to pick up a 5-iron. In fact, the book offers a step-by-step tutorial for newbies and experienced golfers alike, with tips on everything from the club grip and the arc of the swing to the proper spine angle. It is a strong complement to last year’s DVD set, “Lessons of a Lifetime,” which showed video versions of many of the same instructions.

“With ‘The Timeless Swing’ and ‘Lessons of a Lifetime,’ I wanted to produce what I think is the proper way of doing things with a golf club,” Watson said. “These are things that I’ve gleaned from the lessons I received throughout my life.”

The book, which has a foreword by Jack Nicklaus and is co-authored by Nick Seitz, also features QR code technology that allows readers with smartphones to download videos of Watson demonstrating the lessons in the book.

“It’s hip and edgy, right?” he asked with a smile. “But it’ll probably be old hat two months from now.”

Stopping by the book signing event was David Lauren, the company’s executive vice president of advertising, marketing and corporate communications, who took time to pose with Watson between autographs.

“I’ve been with Polo since 1993,” Watson said of the sponsorship relationship. “I like the classic merchandise with contemporary styling because there’s always something new about it,” he said, adding that he especially liked the “great ties” and the fact that the merchandise “lasts forever.”

“This is what I’ve always liked to wear.”