Stars of the campaign, including Anh Duong and Rosemary Ferguson, attended the Italian jeweler's cocktail party in Milan. 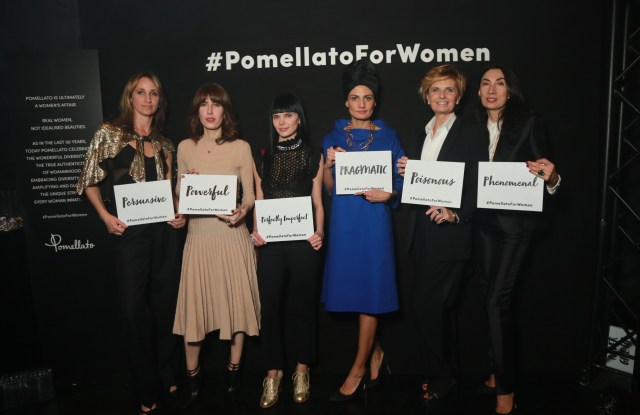 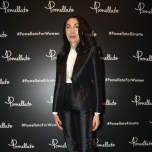 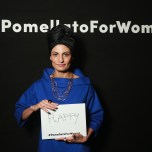 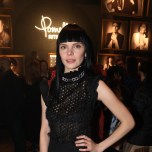 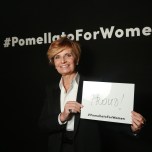 The Italian jeweler’s chief executive officer Sabina Belli greeted guests at the Teatro Arsenale in Milan, where large-scale black-and-white images from the campaign were suspended from the ceiling and a selection of Rittrato rings in different sizes were set out in a glass display case.

Guests were invited to pose in front of a backdrop with the hashtag #PomellatoForWomen holding signs featuring pre-printed words starting with the letter P (think “patient,” “powerful” or “peaceful”) or blank to add their own message (Belli opted for “proud!”).

Ferguson, who shot to fame as a model during the Nineties grunge era, said she was launching a health food brand called Underground Food Revolution.

Ferguson will start with a test location in London’s Canary Wharf business district, but she is also plotting a supermarket range and working with Amazon’s new fresh produce and grocery service AmazonFresh.

Hintikka, a Finnish freelance journalist and scriptwriter based in Paris, said she was working on her first novel. “I have a good half of it and everything is organized,” she said. “I just need to do the dirty job of actually writing it, staying in front of my computer for hours and hours in my pajamas.”

Hintikka, who moonlights as a model, said she favors chunky jewelry. “I’m from Scandinavia, so my style is very minimalistic, quite calm and harmonious, and I like to pimp it up a little bit with statement jewelry,” she said. “All this tiny little jewelry is not necessarily for me. I like it when it’s big, otherwise I don’t wear it all.”

Duong is working on an installation for the future Statue of Liberty Museum, scheduled to open in 2019. “It’s going to be a mural in the museum with all the names of the donators,” she said, noting that the project felt especially topical in light of the debate around President Donald Trump’s efforts to curb immigration. “Now more than ever, it’s such an important and hot subject, because it’s about liberty.”

Duong, also a former model, said she enjoyed reuniting with Lindbergh for the campaign. “You never feel when Peter photographs you that you’re selling a product. He really captures the woman,” she said, adding that she was especially pleased that he didn’t retouch her wrinkles.

“If I paint somebody, if I don’t paint their wrinkles, the portrait is boring. It doesn’t look like the person,” she argued. “We live in an age where everybody wants to erase everything from their face, and if you have a wrinkle or a shadow it’s almost like you’re dirty, you didn’t brush you teeth, which is crazy.”

The painter and sculptor said she was excited to see fashion becoming more diverse in general. “I think it’s a really nice time for women now that we are starting to see beauty at every stage of life, beauty in every shape,” she said. “I’m really for that, because beauty is everywhere.”