A Viral Pop-Culture Blog Gets Its Due Art Treatment

"Pop Culture Died in 2009" teams up with the curators of THNK1994 Museum to open an exhibition inspired by early Aughts infamy. 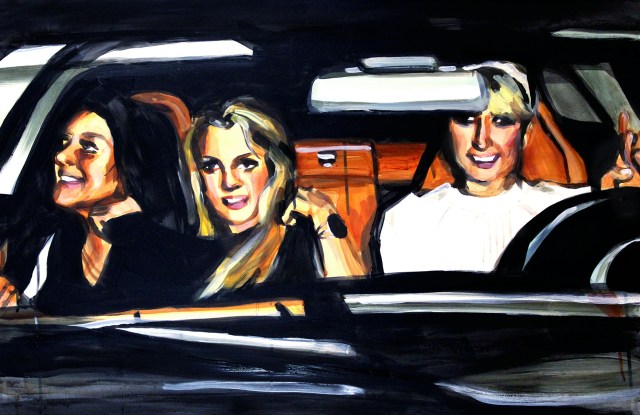 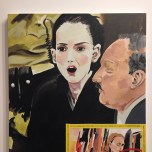 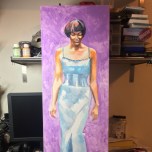 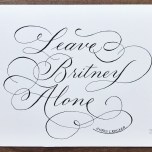 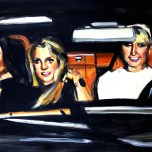 A Tumblr-famous blog has — finally — come to a museum somewhat near you.

Pop-culture maniacs who worship at the shrine of Us Weekly are aware of a Tumblr called “Pop Culture Died in 2009.” For those less aware of the nostalgia-driven blog, the Tumblr, created by a high school student from Long Island, pokes fun at the ridiculousness of celebrity culture and coverage from the years 2000 to 2009. This past weekend, the blog stepped outside of its digital borders and opened an exhibition featuring the Aughts’ most infamous moments on canvas paintings. Until Sept. 10, the collection will be on display at the THNK1994 Museum in Brooklyn, the same museum that hosted an exhibit called “The Olsen Twins Hiding from the Paparazzi” last year.

“My fellow Americans, it’s that time of year to celebrate icons by drinking massive amounts of…honestly water,” reads the online invite, written in a similar fashion to the controversial one Nicole Richie sent to her friends in 2007 to invite them to her Memorial Day barbecue. “Right now, someone somewhere is looking at an exhibit featuring photos of rock stars [sic] in their heyday. Good for them! We feel it’s time to celebrate the icons of the aughts [sic] we all know and love as the rock stars they are.”

Pop Culture Died in 2009’s creator sat down with WWD ahead of the exhibition opening. Though he usually remains anonymous, he agreed to be called Matt for this interview.

WWD: Who’s your all-time favorite celebrity?
Matt: I would definitely say Anna Nicole Smith, since she was the one that got me into it. I was around four years old in my living room and “The Anna Nicole Show” was on TV. I had no clue who she was or her story, but here was this grown woman slurring like a child, being carried around by her assistant and her lawyer, begging for Vicodin, so it was really an image that stuck with me and shaped everything I was into from that point on.

WWD: How big is your tabloid collection?
Matt: I’ve never sat down and counted it. I do have a lot of free time but not that much. I would have to say, it’s got to be a thousand at this point.

WWD: How did you come up with the title for your blog?
Matt: I’ve never really told anybody how it came about. First, it wasn’t even “Pop Culture Died in 2009.” It was something completely different. I was interested in true crime stories. One of the cases I’ve always been so fascinated by was the Phil Spector case. What fascinated me was how many celebrities were tied to it. One of the things that really interested me was the victim, Lana Clarkson, this B-movie actress in “Fast Times at Ridgemont High” and a bunch of these straight-to-video films. One of the last projects she signed on to do was called “Brentwood Babes,” a play about tragic Hollywood blondes like Sharon Tate, Marilyn Monroe. Originally, the blog was called “Brentwood Babes” and it was dedicated to tragic Hollywood blondes. I got sick of that. I was sitting on the school bus thinking, “Pop culture died in 2009.” I don’t know where it came from, but I ran home and changed it.

WWD: What do you think killed pop culture?
Matt: I definitely think there are many factors to it. I think social media, of course. There really isn’t that suspense of waiting for the news from a gossip site or a magazine. You just know it right away and then the excitement wears off. Also, the recession definitely took a toll on it. Before that, there were things like VH1’s “Fabulous Life of…” and, of course, that went out of fashion. It was no longer fun to see these extravagant lifestyles, since the rest of the country’s suffering except these few celebrities.

WWD: Tell me about the exhibit.
Matt: I originally told [Matt and Viviana] that I wanted it to be the evolution of the scandal throughout the 2000s. They just picked one central point, which was Nicole Richie’s Memorial Day party from, hell, back in 2007. Not only did Mischa Barton go to this party, she overdosed at it. You have Lindsay Lohan being arrested for her first DUI that same weekend and Paris Hilton was getting ready to go to jail. It was a very, very busy weekend. And, of course, Britney [Spears] is barfing in the lobby of SkyBar — she’s obviously doing something. They said that would be the central point, but I also suggested we include things like Winona Ryder at court and Anna Nicole Smith, of course, and Michael Jackson — all these celebrities with these ridiculous public personas that I grew up fascinated by.

WWD: What do you look for in a gossip story?
Matt: My favorite stories are the ones where a bunch of celebrities connected. Recently I posted something on the blog about a plastic surgeon that [allegedly] did work on Donald Trump and Ivanka, but was also [allegedly] the Hilton family’s plastic surgeon and [allegedly] the Jackson family’s and all these other celebrities. I love that small world revelation. I love how small Hollywood is and how everyone seems to know each other, even though it might seem like a vast thing, where people don’t run in the same circles.