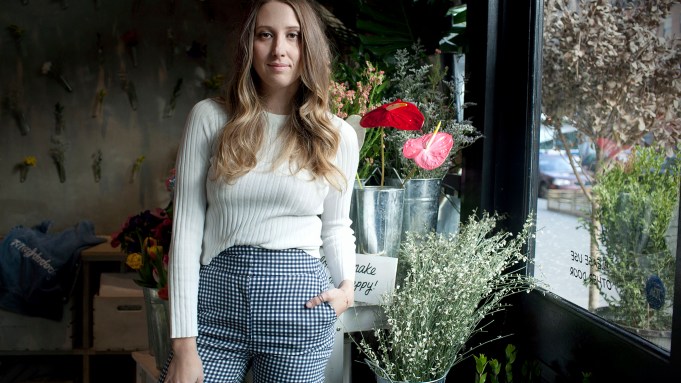 A lack of any sort of training isn’t exactly a selling point for most entrepreneurs — but for florist Kelsie Hayes, it has become her calling card.

“The fact that I’m not a trained florist really works in my advantage,” says Hayes, from a table at Gansevoort Market. The 27-year-old is the founder of the year-old business Popup Florist, which she runs out of a window-facing slot at the Market, having landed there in June after a series of, yes, pop-ups.

Her training, rather, is in fashion design, which has led her to develop a client roster including companies like Barneys New York, Topshop, Baja East and Sandro, and individuals like Eva Chen and Emily Weiss.

Upon graduating from the Fashion Institute of Design & Merchandising in Los Angeles, the Maryland native was quickly scooped up as a designer for the now-defunct brand Beckley, where she was given near-complete creative control. “It was sort of my dream job in fashion,” she says. “I worked with the owner really closely, we did three collections a year and we had our own stores to put them in, so it was amazing. We ended up closing in November, [the founder Melissa Akkaway] wanted to focus on her family and I think fashion is just really hard right now.”

Going from her dream gig to unemployed at 25 left Hayes wondering what the next step was — and what would top her previous gig. “I had a brief moment of ‘oh my God, what am I going to do with my life,’” she says. “And then I thought I should really start doing florals or events, something else that’s another passion of mine. So one night, in January of 2016, I was like, I should start something called Popup Florist because then I don’t have to have a permanent space. And I signed up for the Instagram right away.”

The social media app has been the main driver in her success. After her first pop-up at West Village coffee shop The Elk, for Valentine’s Day in 2016, she continued with small pop-ups before moving into Gansevoort Market in June. But Instagram word-of-mouth has been the biggest source of business.

“Eva Chen is probably one of my bigger clients; she’ll mention me in her Instagram story, and when she does, [I always] feel like someone reaches out to me,” Hayes says. “Emily Weiss from Glossier put [my work] on her Instagram story and then after that did another post of my business card. It’s gone exactly how I wanted to — I work with fashion brands and beauty brands, and I haven’t had to do any corporate work really. I’ve been able to work with my dream clients. Instagram has changed everything for all businesses, but for mine it’s [especially] helpful.”

In addition to such influencers and regular customers, who mostly find her in the market and through Postmates (where she is the only florist vendor), Popup Florist is becoming a go-to for a variety of brands looking for nontraditional floral arrangements.

“For fashion week I did Topshop’s dinner, and I also did a dinner for Baja East, at Kola House,” she says. “[For Baja East] we did little baby gold pineapples — very their vibe, supertropical. I think the best thing about working with fashion brands and coming from that background is it doesn’t take a lot of effort on the client part — they just tell me what they’re doing and they kind of give me creative control. My main thing with this, and my first thought when I started it with these brands, is that I want to send things out in a more thoughtful way than I think other florists do. I always think of how I can get the brand’s message across.”

Her lack of training and relative newness is one of her biggest appeals to such brands. “The one thing I always hear back from customers is ‘oh my God I’ve never seen this with this,’” she says. “I think my aesthetic is putting together interesting color or texture arrangements, instead of what’s ‘supposed’ to go together. I don’t think that people can get away with that in other industries.”

A Farm Girl’s Way With Flowers