Mazzi and his family transformed a 15th-century building in central Rome in a "home away from home."

The view from the Palazzo delle Pietre in Rome.

Combining his love for interior design and the city of Rome, Prada chairman Carlo Mazzi has unveiled a beautiful lodging project.

With his wife Patrizia, a lawyer, and their two children Barbara and Luca, Mazzi in 2012 came across the opportunity to take over a crumbling 15th-century palazzo in central Rome, which they renamed Palazzo delle Pietre, a nod to the family’s collection of ancient stones.

Mazzi, who has been chairman of Prada SpA since 2014, purchased the building as a personal investment with plans to turn it into a hospitality project, which bowed in the fall. He declined to provide a figure for the investment.

Located on Via delle Coppelle, a stone’s throw from central Piazza Navona, the building was erected on top of the Terme Alessandrine ex Neroniane thermal baths dating back to 62 AD. The fact that 13 heirs of the former owner litigated over the site for years is a sign of its relevance.

“We were looking for a house in central Rome for the family and we came across this ruined building located in a privileged position and our old dream of creating a hospitality structure resurfaced,” Mazzi told WWD.

“We wanted to share this place with others, reflecting the hospitality spirit of ancient Greece,” added his daughter, Barbara Mazzi Pensieroso.

The building has undergone a major revamp and has become part of the Associazione Dimore Storiche Italiane, the organization that promotes a network of Italian historic houses.

The space has been divided into eight apartments ranging in size from 484 to 1,400 square feet, each conveying a unique personality yet all exuding a similar taste. The rooms start at 450 euros a night. “Staying consistent to our ideal of beauty has been the fil rouge throughout the project. We spontaneously created eight apartments that are extensions of our house, each one reflecting in a way our aesthetic taste, in terms of space organization and selection of furniture and knickknacks,” explained Mazzi Pensieroso. 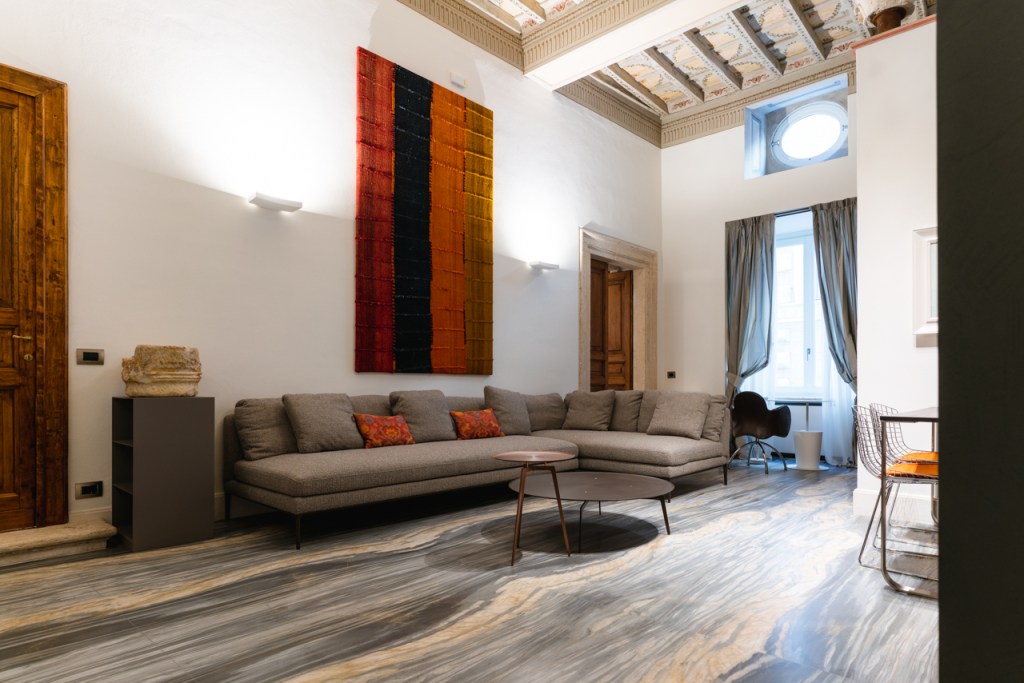 A living room in one of the apartments of Palazzo delle Pietre in Rome.  Courtesy Photo.

To this end, Mazzi lent part of his personal collection of antique stones to decorate the apartments. The collection tells another family story, as it was initiated by Mazzi’s great-great-grandfather in the late 19th and early 20th centuries.

“Since I was a teenager, I’ve always had a certain passion for collecting [ancient] fragments, which I brought back to light. Whenever I’ve had a chance, I purchased other pieces from antique dealers in Italy,” Mazzi explained.

“I’m fascinated by these objects. Collectors are often wacky people, they stockpile items that they’re not even able to enjoy and the palazzo is allowing me to exhibit my collection…which would be usually stored in the attic or basement,” he noted with a laugh.

“My father often says that stones preserve us from the robbery of time. They have a special meaning for us,” added Mazzi Pensieroso.

Travertine gates and frieze-carved walls brought back to their splendor by local artisans embellish the building and each apartment juxtapose refined antiquities with sleek modern design objects. “We are committed to preserve and highlight Made in Italy, which represents an excellence. We did a lot of research among the major Italian design brands,” Mazzi Pensieroso observed. Lighting from Artemide, and modern furniture designed by De Padova, Alivar and Danese share the spaces with tapestry sourced from Milan’s Altai gallery and textiles created by the city’s Lo Studio atelier, owned by Beatrice Petriccioni di Vada. 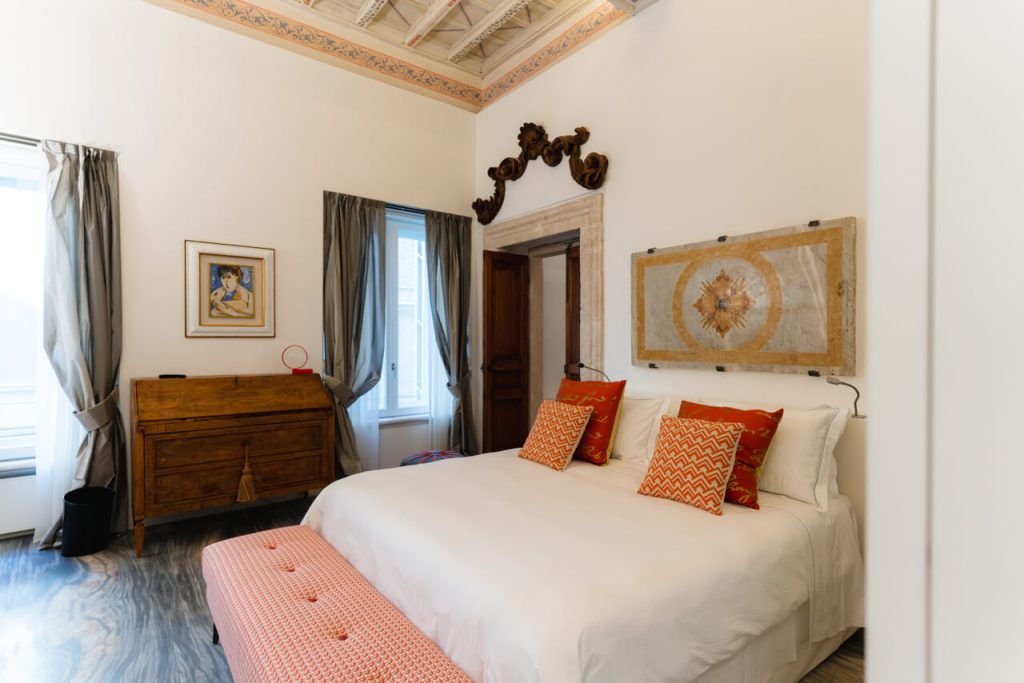 A bedroom in one of the apartments of Palazzo delle Pietre in Rome.  Courtesy Photo.

The restoration project, spearheaded by Mazzi, a seasoned engineer, in collaboration with architecture firm Mp2A, was aimed at recovering the architectural elements of the building, which is under the tutelage of Rome’s superintendence.

Finding the perfect spot “ignited an enthusiastic passion which [helped] me fight for two years to secure the building and face huge restoration works,” Mazzi explained.

As part of the renovation works, parts of the building that were raised, infringing the local building regulations, had to be demolished. Preserving the original ceilings that boasted architectural and artistic value required further commitment, as new slabs in reinforced concrete in compliance with safety standards were erected.

“Restoration, preservation and enhancement have been our main goals,” Mazzi Pensieroso said, noting that a place like Palazzo delle Pietre has to guarantee high standards of hospitality. “We want our guests to feel like they’re in a home away from home, they need to feel welcomed. That was our main goal and I think also our strength.” 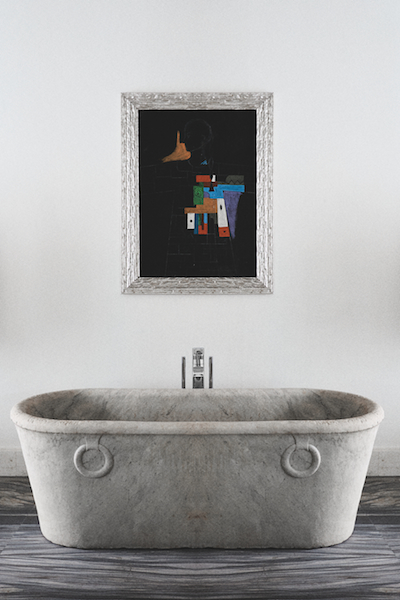 A detail of one of the apartments inside Palazzo delle Pietre in Rome.  Giovanni Gastel/Courtesy Photo.

To this end, the family has established a Club Frammenti [fragments] membership offering a range of tailored services, including personal drivers and shoppers, travel guides, a shared professional kitchen, a gym and steam bath.

The club also has a cultural resonance, conceived as a “cultural hub” promoting a range of monthly conferences on the arts, science and well-being. “It’s like a literature circle from the Romantic era, with a few members all eager to share ideas and attend exhibitions and conferences together,” Mazzi Pensieroso said. The membership club is also open to nonguests.

The feedback has been positive so far and the family expects to scale business starting in 2020. In order to keep the intimacy of the location, Mazzi Pensieroso explained “we are still mapping out our strategy, but we’d rather not open up to mainstream touristic networks that will undoubtedly boost our business but at the same time impact the intimacy of the experience,” she said. Word of mouth has been key so far and the family is evaluating upscale partners to potentially collaborate with in future.

The Mazzis also purchased a second, smaller unit, located in nearby Piazza delle Coppelle, which is under restoration and is expected to bow in 2022. It will house three to four additional apartments.

“Rome is our priority, it’s our home and heart. It deserves to be promoted, as it’s already filled with beauty that is somehow dozy,” concluded Mazzi Pensieroso.