Miuccia Prada christened the boat in Cagliari on Wednesday.

CAGLIARI, Italy — “The emotion is always there, always important and every boat launch is new and different, it’s not something you get used to.”

Prada Group’s hard-charging chief Patrizio Bertelli is not someone you would expect to get personal, but on Wednesday, at the christening of the new Luna Rossa, he was clearly pleased with the two years of work that went into the sleek boat. This is the sixth America’s Cup challenge for Bertelli.

It was a day of celebration at the Luna Rossa Prada Pirelli dock of this Sardinian town, and the launch drew around 450 people. Miuccia Prada, wearing a blue pantsuit and sensible dégradé loafers, christened the boat with a bottle of Ferrari Maximum Blanc de Blancs, as the Luna Rossa team, their families and Cagliari officials cheered on.  After the previous silver models, the latest design, the AC75 monohull, glistened black under the still-scorching sun.

This was the ninth time the designer acted as a godmother to a Luna Rossa boat. She was flanked by the archbishop of Cagliari, Arrigo Miglio; her husband, who is also president of the Luna Rossa Prada Pirelli team; Agostino Randazzo, president of the Sicilian sailing circle, and Marco Tronchetti Provera, chief executive officer of Pirelli, co-title sponsor of the Luna Rossa team and partner in the technological development. No microphone was needed by  the designer, who firmly waved it away – offered by her husband – and proceeded with the ceremony of breaking the bottle on the bow like a pro. Prime Minister Giuseppe Conte arrived in the afternoon.

“We are at the same level of the other challengers, we are sure we are not starting with any deficiency,” trumpeted Bertelli.

He also was enthusiastic about the choice of a monohull. “After three America’s Cusp, enough — it was time to change from the multiple hulls. The revolutionary innovation through which the concept of single hull was reinterpreted leads to even greater expectations,” he said.

Bertelli touted the importance of the research that goes into such ventures as it is “the foundation for the development of leisure boats, cruise boats, the ones you rent. Now they all have air conditioning, generators. Who could have imagined that in the Eighties? There are many technical advancements that will shape the next generation of boats for at least the next 10 years.”

The entrepreneur confirmed the investment of 65 million euros in the sailing venture. Luna Rossa is now 100 percent privately owned by Bertelli. A passionate sailor, Bertelli said this time around he will be able to get on the boat. “With the [previous Luna Rossa] catamaran, it was more problematic,” he said.

Asked about the potential development of a Luna Rossa collection — not to be confused with Prada’s Linea Rossa line — Bertelli said was not in the pipeline. 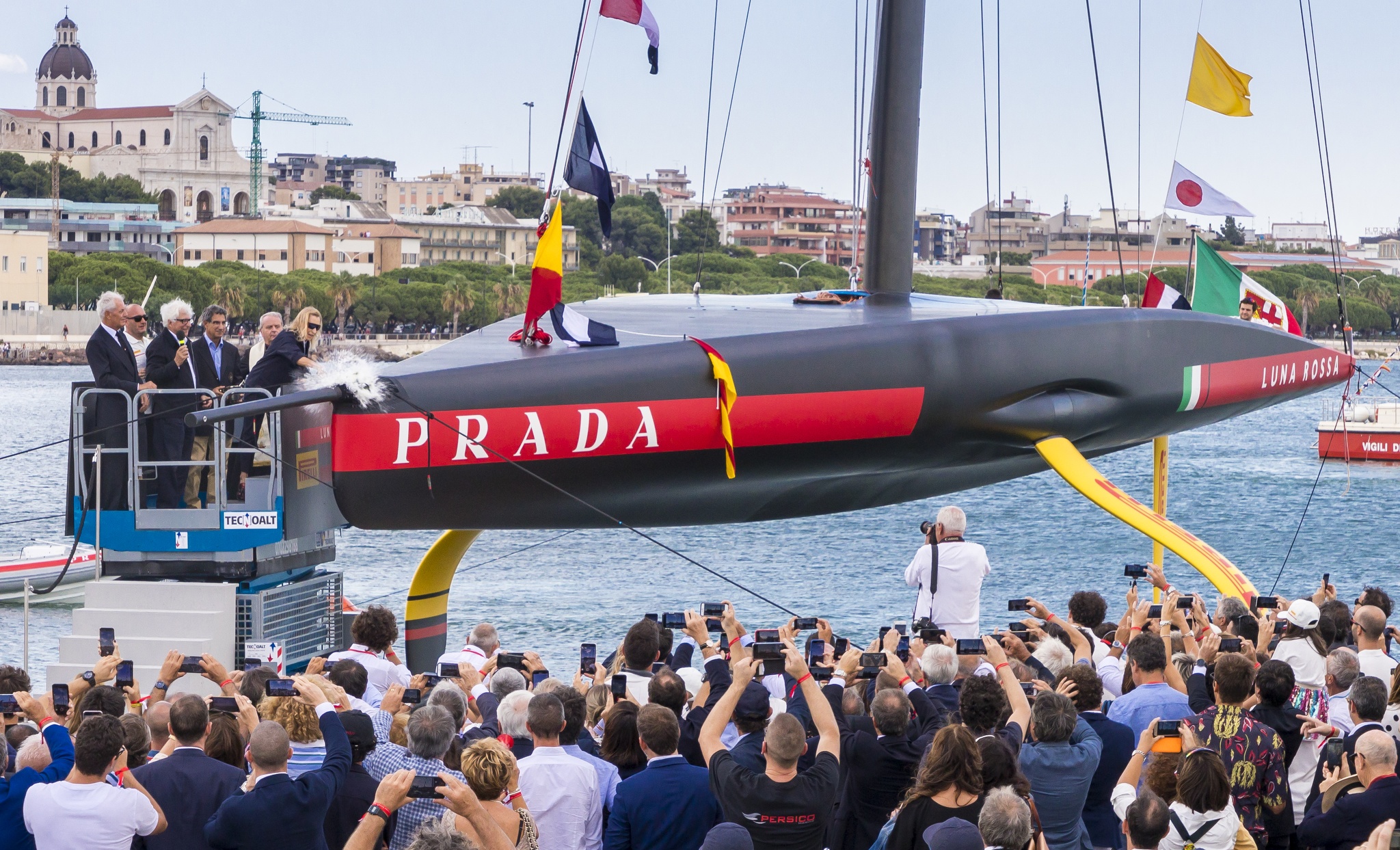 The boat will represent Italy and the Sicilian Sailing Circle at the America’s Cup, the oldest trophy in the history of sports and the most prestigious in the sailing world. The first series of preliminary regattas of the 36th America’s Cup presented by Prada, the America’s Cup World Series, will be held in Cagliari April 23 to 26.

The development of Luna Rossa’s AC75 model, built by Persico Marine, employed more than 90 people, of which 37 were designers, for almost two years for a total of 78,000 working hours. To create the hull, they used 7,000 square meters of carbon fiber and 400 square meters of aluminum in a honeycomb structure. The carbon foil arms, each weighing 500 kilos, are designed to support a maximum weight of 27 tons.

A soft wing is another innovation of the AC75, with two parallel mainsails.

Max Sirena, skipper and team director, said the boat will almost always sail in a foiling manner. “The hull will almost never touch water, and move very fast. We have done a lot to reduce as much as possible the time of transition between the phase when the hull is completely in the water and when it’s flying. A balance that is difficult to achieve and on which we continue to work as we develop the boat,” he said.

Asked to talk about working with Bertelli and the Prada Group for 25 years, Sirena said: “We all know his character, but we are here because of him, Miuccia Prada and our sponsors, and we can only learn from him. The most fascinating thing is his attention to details and how he never takes anything for granted.”

This is a return to the sea for Luna Rossa and its sixth challenge, but fifth race, as the team in 2015 withdrew from the competition in disagreement with the overturning of rules unanimously adopted throughout the previous year by the Oracle Team of the U.S., which was owned by Larry Ellison and which lost the America’s Cup to the New Zealand team.

The Luna Rossa team was established in 1997 by Prada’s ceo with the original name of “Prada Challenge for the America’s Cup 2000.” The team won the Louis Vuitton Cup in 2000, with a record of 38 victories over 49 races. It also competed in 2003 and in 2007, when it reached the Louis Vuitton Cup final.

The concept of a Challenger Selection Series originated in 1970, when for the first time in the history of the America’s Cup there was more than one international challenger vying to race against the defender for the coveted trophy. Organized by the Challenger of Record, the Prada Cup is the final step of the road to the America’s Cup.

With its sixth challenge, Luna Rossa overtakes the historical record of Sir Thomas Lipton, the English sailor who challenged the American holders of the America’s Cup five times from 1899 to 1930 — but who lost every time.

Prada in November unveiled the new Prada Cup designed by Marc Newson at the Yacht Club de Monaco. The silver trophy handcrafted by Florentine silversmiths was housed in a luxurious leather trunk designed and handcrafted by Prada. The trunk, which was inspired by the first luxury steamer trunks produced by the brand, was made and assembled by hand.