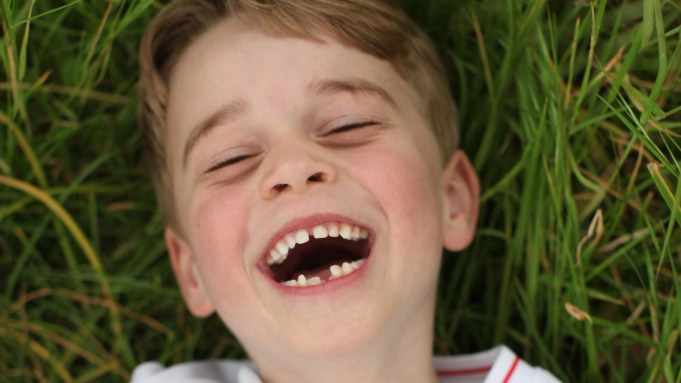 LONDON — Prince George is growing up, with his family marking the young royal’s sixth birthday on July 22 with the release of official photographs.

Shot by his mother, the Duchess of Cambridge, the photographs show the prince flashing a toothy grin while wearing an England football shirt in the garden of Kensington Palace, his home.

The Duke and Duchess of Sussex also wished Prince George a happy sixth birthday in an Instagram comment.

Meghan Markle and Prince Harry commented on one of the three photos Kate and William posted on their official Kensington Palace Instagram page, writing: “Happy Birthday! Wishing you a very special day and lots of love” with a balloon and a birthday cake emoji.

The picture, taken on a recent family holiday, features Prince George in a dark green polo shirt and blue and white striped shorts.

The Duke and Duchess of Cambridge and their family are spending their summer holiday in Mustique, a popular holiday destination with members of the royal family as the island is a no-fly zone.

Prince George is third in line to the throne. He was born at St Mary’s Hospital in London in the private Lindo Wing where his siblings, Princess Charlotte and Prince Louis were also born.

Last year, to mark the Prince’s five-year milestone, The Royal Mint issued a five-pound coin featuring a reinterpretation of the image of St. George and the dragon titled “The Progress of the Prince,” which retailed at 13 pounds.

For More on the Royals: