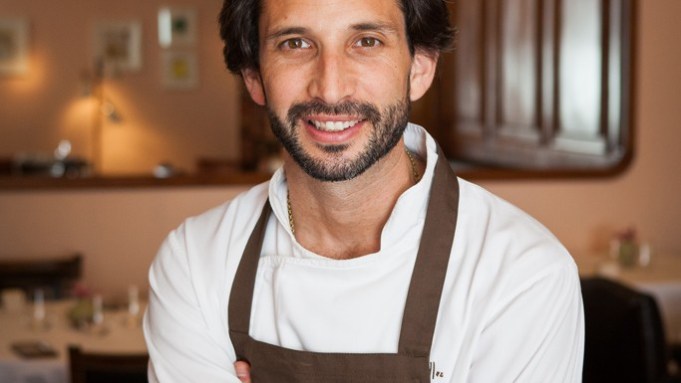 “You can do modern Portuguese cuisine without killing the past,” says José Avillez, whose passion for food has spawned a batch of five restaurants in less than three years in the Chiado neighborhood of Lisbon’s Old Quarter — each with a different concept and personality.

“Portuguese cuisine is based on stories and history,” says Avillez. “We’re a small country with many regions and different flavors and seasonings. Our kitchen is inspired by these regions, from the sea and the countryside to a more urban culture, but it’s not a substitute for the original, it’s an addition to it. You have to maintain the traditions and gastronomic soul of a country and that means flavor and textures.”

As an example, the 34-year-old chef offers an “edible cocktail” of white port, tonic water and a frozen cocoa-butter ball. “It’s a new inspiration that has everything, including the fact that you can eat port wine. It’s a different concept like seafood and pine nuts that for me are meant to be together,” he says.

Avillez, a disciple of revolutionary Spanish chef Ferran Adrià and his restaurant El Bulli, adds, “You have to do inspiration your way, but Ferran was a big influence. He changed my life, especially in terms of options.

“Portugal has its own identity and it’s very important to respect and maintain it. We have a Mediterranean climate and cuisine. Cod is the most emblematic ingredient and market-fresh vegetables, fish and seafood are basic.”

Avillez spends 80 percent of his time in Belcanto, his most acclaimed eaterie, across the street from Lisbon’s 18th-century Opera House, “because the creative brains and a small laboratory are here.” So are two kitchens and 25 cooks. “It’s quite an orchestra, everyone knows what to do — and they don’t talk much,” clarifies Monica Bessone, Avillez’s public relations director.

Belcanto’s two dining rooms reopened in 2012 under Avillez’s tutelage and it earned him a Michelin star within a year. (There are only two other starred chefs in Portugal). “It’s fine dining, but not too pretentious because people aren’t looking for formal,” he says. With vaulted ceilings in a soothing pale pink, grained-wood panels, a wall of wines and black leather-tufted banquettes, the restaurant has a clubby British feel.

It’s not easy to describe Avillez’s cuisine because nothing is what it appears. Think air and irony — and that’s just the beginning. Specialties include a mackerel belly starter; baby carrots and turnips in clotted buffalo milk; raw shrimp with walnut emulsion, and a

suckling pig that’s slow-cooked for 72 hours. French-fried potatoes are boiled before frying, and desserts include a frozen tangerine juice sorbet the size of a small baseball, and jellied olive oil, chocolate truffles and cookies from the coastal town of Cascais, where Avillez was born, tucked in a gift box.

In Cascais, and taking a page from Adrià, Avillez helms a takeout and catering service. “After 13 years, I’m still growing as a cook and trying for something different all the time,” he says. “Every new concept comes about because I have the feeling we should be doing more. I think it’s safe to say customers weren’t expecting this kind of creativity.”

How did he manage to convince them? “It’s a big challenge,” he says. “We have to deliver a special experience. The best way to maintain a clientele is quality and the team is ready and on the job up to 16 hours a day. People need to come and taste for themselves. Press and social media are important, but after critical appraisal is word-of-mouth. And the details, lighting and music are important, too.”