Just a walk away: work by Kaws, Swoon, Sam Moyer and more.

In New York, there’s never a shortage of new art to see — and some of the best pieces are outside in plain sight (and also don’t involve a trek to the gallery district). Here are a few recent and upcoming public art projects around the city that are worth seeking out.

Sam Moyer is the latest artist to install work at the Doris C. Freedman Plaza in collaboration with the Public Art Fund. Located at the southeast corner of Central Park, the artist’s three sculptures incorporate imported marble embedded in concrete slabs, “doors” that are ajar and framed by bluestone monoliths. The work was inspired by its urban surroundings — the intersection of natural and man-made elements — with the marble a reference to nearby building foyers while the “ajar” aspect of the doors are a nod to the liveliness of the city. The project marks Moyer’s first solo public art installation. “Doors for Doris” will be on display through September.

Kaws’ “What Party” Sculpture at the Seagram Building in Midtown

Brian Donnelly, the pop artist known as Kaws, is the subject of a forthcoming survey exhibition at the Brooklyn Museum. “What Party” opens at the end of February, but the artist’s work is already on full display in Manhattan. Last fall, one of the artist’s large scale sculptures — which shares a name with the museum show — was installed on the plaza outside the Seagram Building in Midtown. The gunmetal-gray sculpture — gaze downcast, with a Michelin-man physique (is it a mirror for these current times?) — will be stationed outside the building through the end of the year.

Caledonia Curry, aka Swoon, is offering a new riff on the “street artist” moniker. In collaboration with PBS American Portrait’s new public art initiative, Curry has created a traveling diorama sculpture atop a 14-foot box truck. The piece will travel throughout the city during four weekends in February. “The House Our Families Built” features imagery — cutouts and painted scenes — inspired by domestic scenes found within the PBS American Portrait archives. It’s also part performance piece. Throughout its run, several performers will step into the work to recite user reflections, culled from the same PBS archival database. 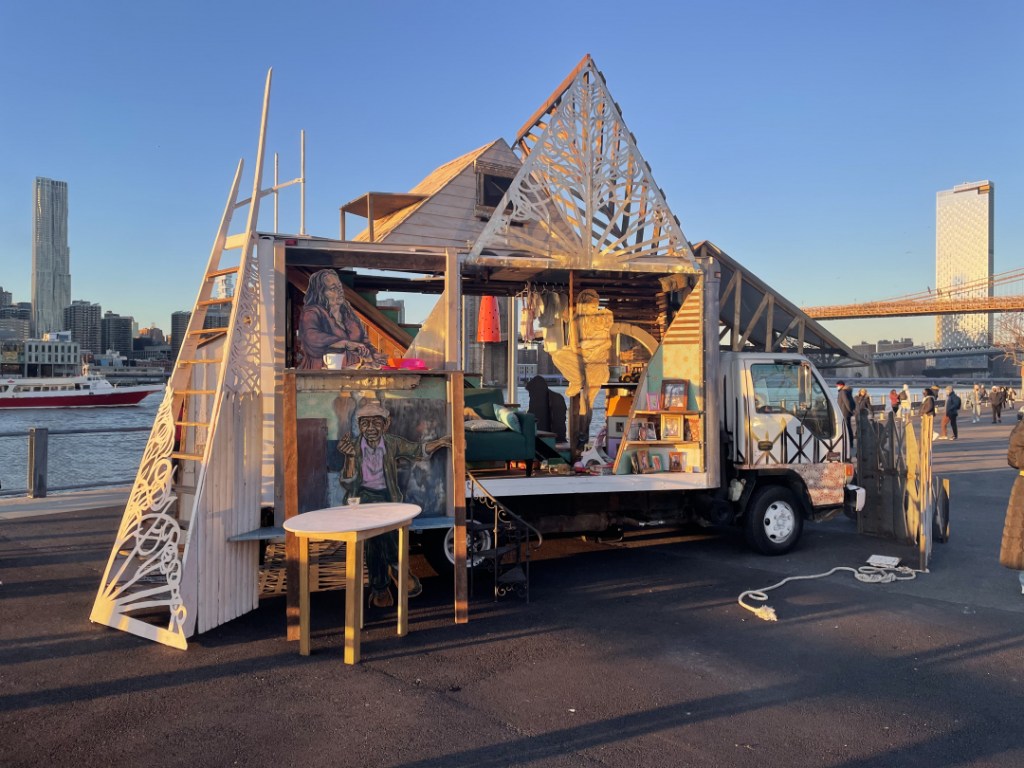 “The House Our Families Built” by Caledonia Curry aka Swoon.  Courtesy

The winner of this year’s Times Square Design Competition is looking to spread the love. The new public art installation, “Love Letters,” will be unveiled at Father Duffy Square on Feb. 10 at 11 a.m. EST. Created by design studio Soft-Firm in collaboration with Reddymade and Worthless Studios, the installation invites the public to leave their own love letters — or letters of hope, appreciation, joy — within the piece. Visitors have the opportunity to tie their contributions (“wish tokens”) directly onto the sculpture. The structure, curved to reflect two interlocking hearts, is composed of netting and plywood interspersed with mirrored windows, and features several nooks for people to sit and reflect.

New York-based artist David Hammons is unveiling his new public art project this spring in collaboration with the Whitney Museum and the Hudson River Park Trust. The large-scale project takes the form of an open metal structure, an outline of sorts of the original Pier 52 shed that stood at the same location as the new work. Hammons was inspired by Gordon Matta-Clark’s (unauthorized) 1975 work, in which the artist cut five openings into the side of the original Pier 52 shed. Hammons’ sculpture serves as tribute to both New York’s shipping industry and the pier’s history as a gathering place for the gay community. “Day’s End” will extend over the Hudson River, with the effect of the work changing depending on light and weather conditions. 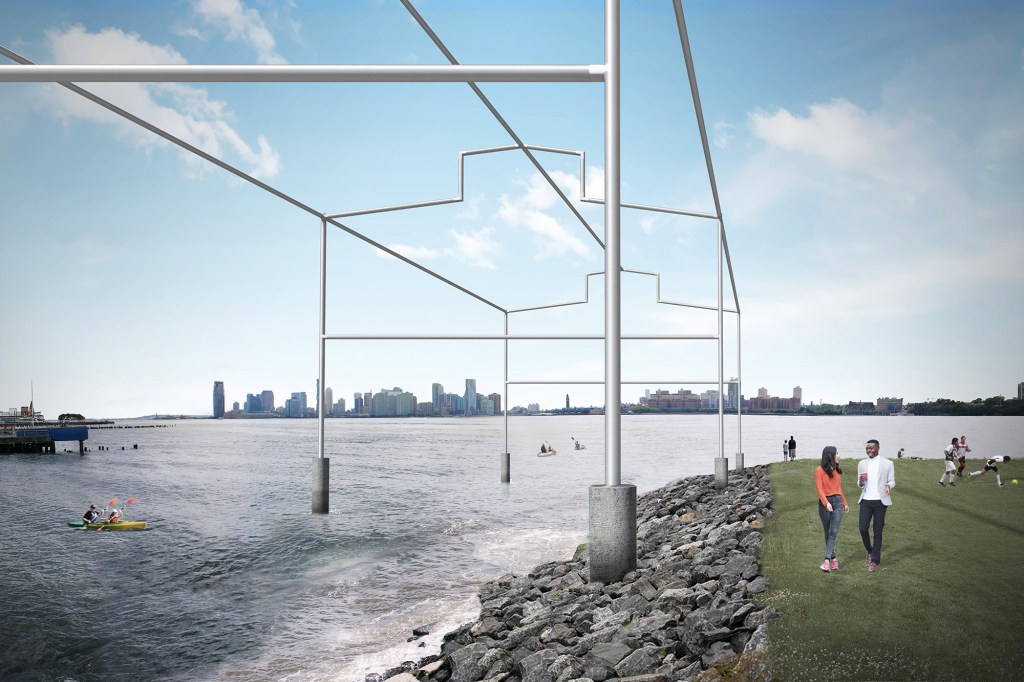