The queen made an appearance at London Fashion Week to attend Richard Quinn's show and present him with the inaugural Queen Elizabeth II Award for British Design.

LONDON — Queen Elizabeth II made fashion history on Tuesday when she attended her first London Fashion Week show. She visited the British Fashion Council’s show space on 180 Strand to attend the emerging designer Richard Quinn’s runway show and to present him with the inaugural Queen Elizabeth II Award for British Design.

Guests gasped, quickly stood up and started clapping when the Queen took everyone by surprise, quietly entering the show space and taking her seat in the front row (naturally, she is the Queen) next to Anna Wintour.

After the show — a colorful, directional lineup that also winked at the Queen’s flair for head scarves — the British Fashion Council’s chief executive officer Caroline Rush welcomed the British monarch to LFW and revealed that she has been working with Buckingham Palace to find a way to “highlight the U.K.’s global position for fashion talent, but also to set the bar for future talent and consider their impact in the industry, society and communities.”

The Queen Elizabeth II Award for British Design — a rose sculpture designed by the Queen’s longtime dressmaker Angela Kelly — was the result of the yearlong conversations between Rush and the Queen’s advisers and will aim to highlight designers that demonstrate talent but also make positive contributions to society, through their work. 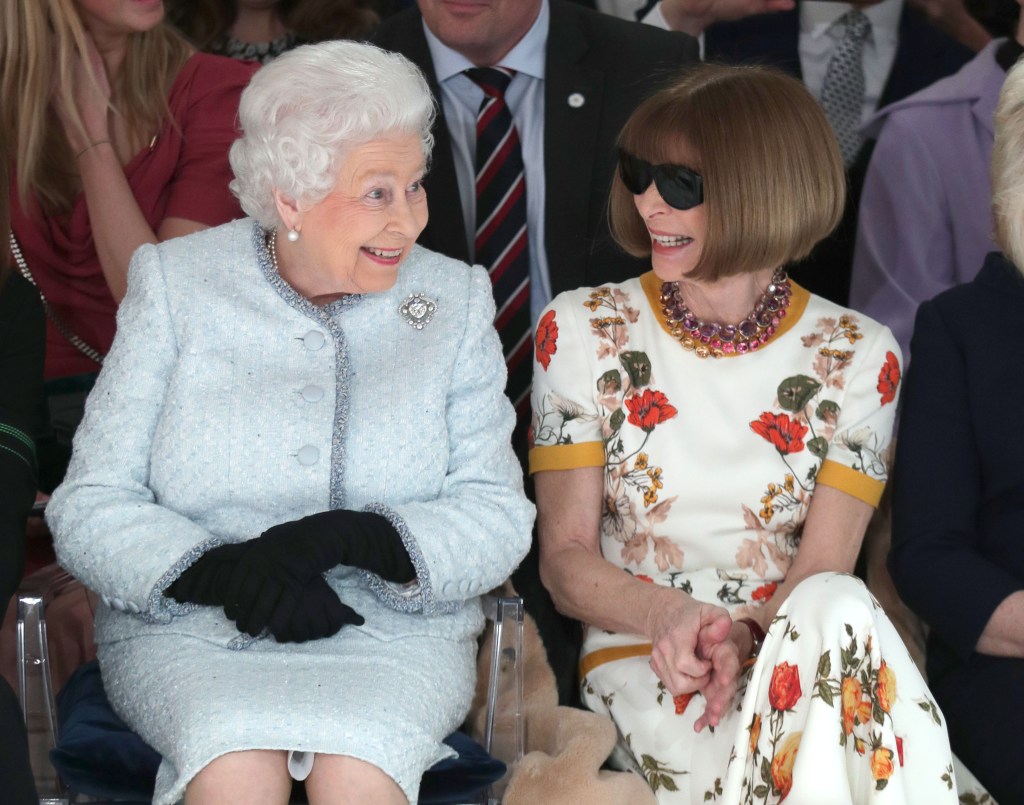 The monarch took to the catwalk — following even more cheers — to present the award to Quinn, wearing a duck egg blue tweed dress and Swarovski crystal-embellished jacket, that was also designed by Kelly.

“Your Majesty, I know that you don’t wish to be known as a fashion icon but for all of us in this room, we have the utmost respect for you and for the cultural impact you undoubtedly have on our industry. Having visited the exhibition of your wardrobe to Buckingham Palace, we learnt that you had to challenge some of the norms, some of the dress codes designed for men, making us in awe of how you reflected the changes in our society,” said Rush of the Queen’s ongoing contributions to fashion and much-lauded style. “As our monarch, you worked with incredible designers highlighting crafts associated with our industry such as millinery, textiles and embroidery,”

When her turn came to speak, the Queen had the room hanging on her every word: “It’s a great pleasure to be here in London Fashion Week today. From the tweed of the Hebrides to Nottingham lace and, of course, Carnaby Street, our fashion industry has been renowned for outstanding craftsmanship for many years and continues to produce world-class textiles and cutting-edge practical designs. As a tribute to the industry and all those who have contributed to British fashion I would like to present this award for new young talent,” she said.

“What just happened? Everyone had a big grin on their face, everybody wanted to scream, but wasn’t sure if it was appropriate,” said model Erin O’Connor after the Queen’s speech, pointing to the impact this award will have on the fashion industry and on emerging talent. “Two proud heritages are coming together from world corners, our Queen and Richard Quinn. I love the idea that she has this wealth of influence and so does he; it’s an appreciation of two worlds colliding. She was marvelous and the collection was marvelous. It can only go a long way to boosting and supporting what we are doing here at London Fashion Week. Richard and everything he stands for is the pioneer of this award. He is showcasing our future and what it looks like and she is protecting it by working hard everyday. What a wonderful story.” 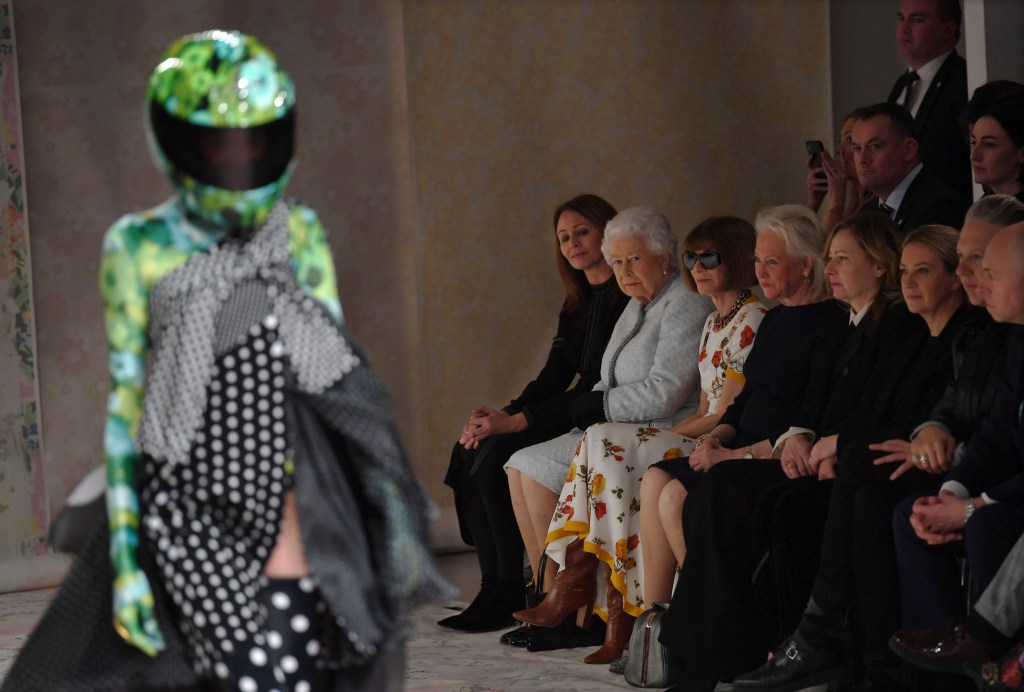 Quinn, who just like O’Connor and the rest of the attendees seemed to be trying to understand “what just happened” himself, said he was only given a few day’s notice of the Queen’s attendance to his show and was sworn to secrecy.

“We only had a few days to add some extra ‘Queen’ touches,” said the designer, who added extra printed head scarves to his lineup in honor of his royal guest.

He also got a few moments of one-on-one conversation with the Queen post-show, who was interested to know about his studies and expressed her hopes that the award will benefit him and many other aspiring young designers.

When asked what sets him apart as a designer, Quinn pointed to his printing studio and the collaborative work it encourages: “I opened my own print studio, so we don’t only print for my own line but for other designers as well. It’s open access and we can do full production or just create samples. Everything you’ve seen here today, was basically made in my studio in Peckham.”

Rush, who selected the award winner alongside the BFC’s ambassador for emerging talent Sarah Mower, also highlighted Quinn’s positive contribution to the design community as a determining factor for her decision. “We’re so impressed with his ethos, talent and hard work that we knew it absolutely had to go to him. This is someone who as well as his own design business, he has created a resource for the fashion community, giving access to his own print equipment and premises to students and his peer group of designers,” added Rush. 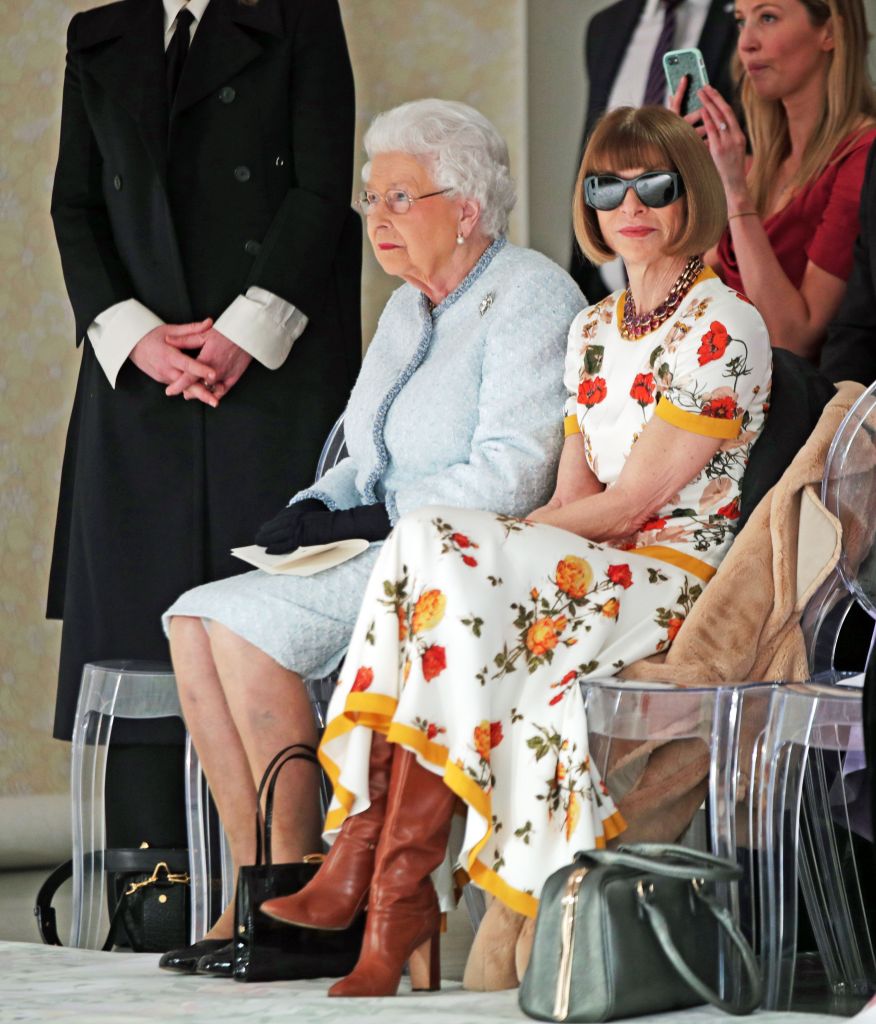 Fellow designers including Charles Jeffrey, Liam Hodges and Michael Halpern were there to support Quinn,

Born and raised in Eltham, southeast London, Quinn holds a B.A. and M.A. from Central Saint Martins. He graduated from the M.A. program in 2016, and launched his line that year.

The young designer, who’s worked at Christian Dior, Michael van der Ham and Richard James, is known for mashing up prints with classic silhouettes, and calls his woman “elegant with a touch of edge.” For fall, he continue to focus on bold prints, but also added a more subversive edge to his collection with exaggerated silhouettes.

This season, Quinn teamed with Epson, where he plans to create textile designs using the firm’s digital print technology. The designer works with Epson’s Surecolor system at his studio in Peckham, incorporating digital technology to create his own styles.

Prices range from 320 pounds for tights to 3,920 pounds for a dress. His collection is sold at Matchesfashion.com, Lane Crawford and L’Eclaireur.

The award will be presented to an emerging London-based designer every year but it remains unclear if the Queen will continue to attend London Fashion Week in the future, to present the awards herself.