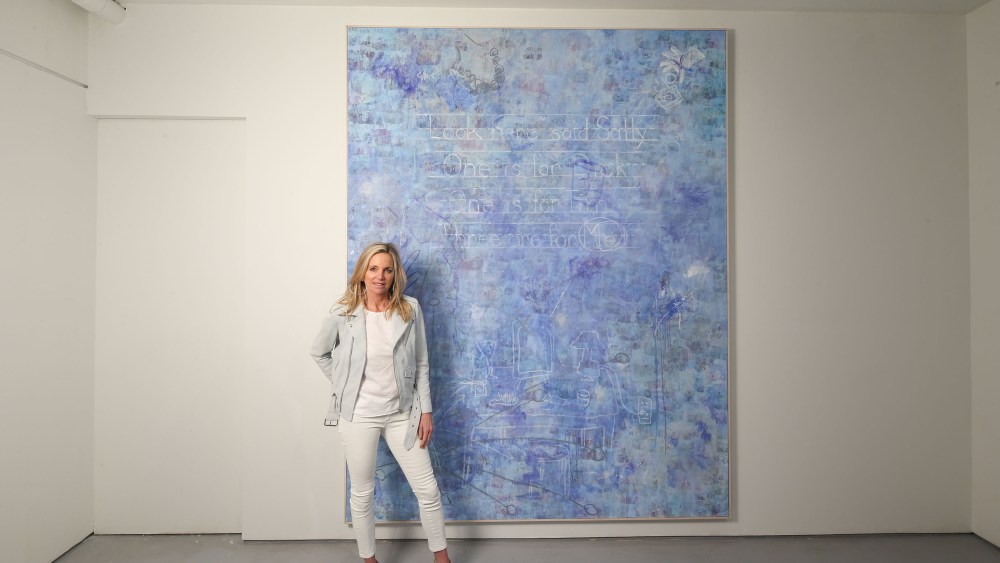 “The rest of my barbed wire was supposed to come yesterday afternoon, but my barbed wire guy got stuck doing something else,” Rachel Lee Hovnanian says two days before the opening of her second exhibition for the Women’s Trilogy Project at Leila Heller Gallery. “So he’s going to come today at 11 with the barbed wire.”

The artist was putting finishing touches on “Happy Hour,” a series of new large-scale paintings and installation being shown for the first time. It’s the follow up to “NDD Immersion Room,” in which viewers had to hand over their phones before entering a darkened nature-themed installation, and continues to build upon her investigation of the effects of cell phone culture. (Part three of the exhibition series will open June 8.)

“I’ve been talking about my addiction to my phone with my previous work,” she explains. “I went home to my mother’s house and I found this old picture of myself. It was crumpled up in the box of photographs, and I looked at it, and looked at my stare, and I started thinking about the fact that all photographs [now] are on the cloud, which is fantastic. So you won’t have a crumpled up picture like that, but then I started thinking about well, then who owns those photographs? And then I looked at what was going on in my mind at that time.”

The series draws heavily from Hovnanian’s childhood, influenced by everything from the culture of growing up in the South to her father’s alcoholism and her own dyslexia. The paintings feature sayings written between lines, many of which were taken from the “Dick and Jane” book series she grew up with.

“As a kid, and the kid of an alcoholic, you generally don’t want to make waves — you want to stay within the lines,” she explains. “So you don’t want him to start drinking, and maybe blame a lot of things on yourself. There was a lot of pressure also for women to be good,” she continues. “I was a dyslexic as well, so I had trouble reading — I couldn’t read ‘Dick and Jane.'” The book series references are a nod toward suppression and the artist’s exploration of gender dynamics; Dick and Jane, as characters, represent the idea of a perfect family.

“Everyone thinks that everyone has this perfect house, but the reality is there’s no real white picket fence [an image in one of her new paintings]. Most families are dysfunctional at some point. But as a kid you think it exists, so you go to your friend’s house and think, ‘Oh, they don’t have the same issues,’ so you hide that you have something going on.”

Hovnanian’s paintings are elaborate monochromatic collages, incorporating subtle layers of photographs, scribbles, and pieces of girl scout uniforms and badges. The imagery in each takes on multiple meanings: Girl Scout badges, in literal form, represent gender norms, or their placement mimics condoms and nipples; in another painting, pearl necklaces are evocative of the contrast created by Southern ideals and sex. 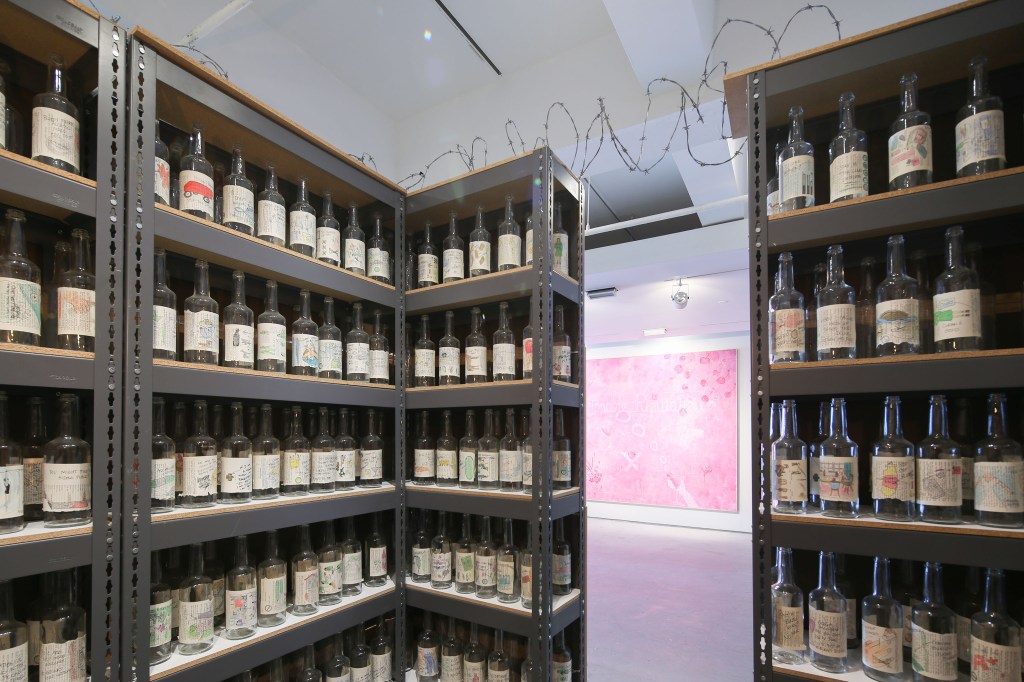 The Girl Scout iconography runs throughout, most prominently in the installation of bottles in the middle of the gallery. Encased in walls of chalkboards, lined with barbed wire at the top, is a collection of empty alcohol bottles with labels crafted from a vintage Girl Scout manual; phrases referencing how a “good girl” is to behave and act are highlighted or underlined, accompanied by her own drawings. Hovnanian has been creating the labels for three years, and continues to add more as she gets inspired by passages in the book.

“We wonder where we’re getting these rules — where does it say that the woman has to clean the table?” Hovnanian says. “You start to realize, oh, maybe this is where — how to look good, why you have to look good, how to set the table,'” an extension of cultural ideals being passed down in gender lineages.

Alcohol plays a role throughout the work, a reflection of the pervasiveness of drinking in American society and heritage. There are martini glasses, flasks, bloody marys, cars hitting trees, perfume bottles. A side exhibition room facing the street contains a collection of rose-toned prints with words like “slut” (the title of the exhibit), “nasty woman” and “good breeder,” with a neon framed clock permanently ticking past four o’clock on the wall — happy hour.

The artist hopes that the work inspires conversation and transparency and that it gives people permission to escape the confines of the lines she felt compelled to stay between as a child.  “The number of people that I have shown the work to, I’d say three-quarters of them had something in their family,” she says. “As an artist, creating conversation is what I’m supposed to do. It’s why I do what I do.” 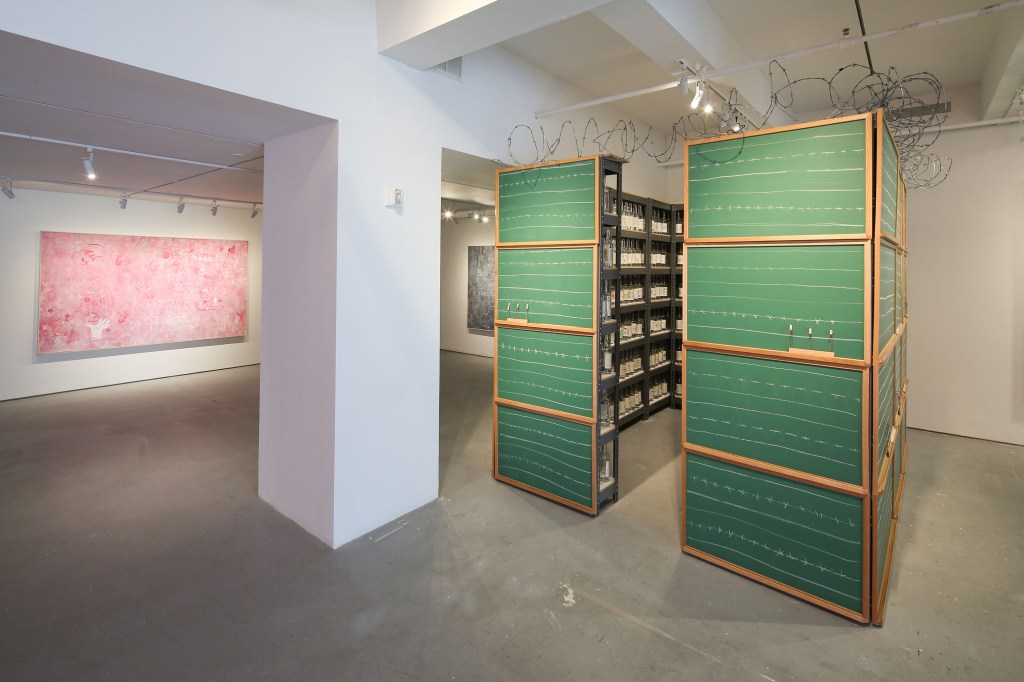 Robin Rhode Explores ‘The Geometry of Colour’ at Lehmann Maupin