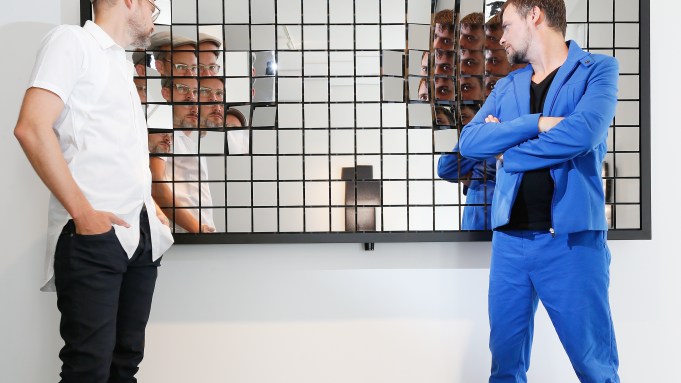 “On the Body” is the artist collective’s first show of new work following the success of their immersive “Rain Room” exhibit, which debuted at Barbican Centre in London and was later installed at MoMA in 2013. Visitors queued for the opportunity to walk through a downpour without getting wet; the rain was programmed to avoid falling wherever people were standing in the exhibit.

Physical presence is a central exploration in “On the Body,” which features five new works by the artists, many of which react and morph as they are viewed.

“It’s about the embodiment of our consciousness,” explained Hannes Koch, standing with fellow lead artist Florian Ortkrass next to a small panel of blinking LED lights, which was inspired by an earlier collaboration with the choreographer Wayne McGregor. “Where do you actually sit, do you sit only in your head?”

The show uses the concept of mirrors for several of the installations, which Koch explained as “exploration of the impact of your own body on a two-dimensional surface.” For “Fragment,” the viewer’s reflection becomes fragmented as they approach a panel of square mirrors — stepping back pieces their reflection back together. Another mirrored panel resembling an oversized floor mirror, “Blur Mirror,” vibrates as viewers approach it, blurring their reflection. “Self and Other” offers yet another take of reflection, offering a delayed 3-D representation of the viewer’s body in light.

“The idea is to explore how much do you relate to your mirror image when there’s a delay? When do you start losing yourself?” Koch explained of the latter exhibit.

Random International’s past collaborations with McGregor have also influenced their interest in movement; they linked with him again for the opening weekend of the Pace exhibition. A casual viewer’s interaction with the exhibits can also be interpreted as a sort of choreography, inspiring movement outside of their everyday gestures.

“For most of these works, you have to really learn yourself a little bit. You have to play with them, see where it picks you up,” Koch added. “We never supply instructions or manuals, it’s for people to explore. What interests us is to observe people, how they relate to these things and what to do with them, and how to behave in front of them. You start wondering about the physicality of your presence in space. If movement is thrown at us by a mirror or a kinetic piece, how we can connect to that emotionally? What is our emotional reaction to machines that in some way pretend to be us?”

The mirrored exhibits build up to “Fifteen Points/I,” a large kinetic robotic exhibit stationed in the back of the gallery that mimics human movement using 15 light points attached to a series of programmed mechanical “arms.” The exhibit was developed during Random International’s artist residency at Harvard using very precise robotics that are able to simultaneously hit very specific data points in space. The exploration was inspired by biomotion research which shows that a small set of data is able to communicate human movement and that small changes in that data can convey gender and emotion.

“We were starting to wonder why human beings connect better and on a more instinctual level with organic movement rather than mechanical movement,” explained Koch. Sure enough, the 15 light points appear as a human walking; a small switch in their movement and they are just points of light.

Above all, the artists hope that their work will provoke conversation around technology’s omnipresence in people’s lives. “What’s that doing to us? That’s a really important discourse that needs to be widely discussed,” Koch reflected. “Has evolution sort of outsmarted itself? This isn’t Darwinist progression anymore, this is much quicker and not organic. Or is it? Can you still call it evolution that we sort of merge with machines and stuff? That question sits at the core of this whole idea of us and our relationship to machines,” he continued. “In order to express our feelings about these things, we’ve chosen to use technology as a material.”

“On the Body” runs through October 22.