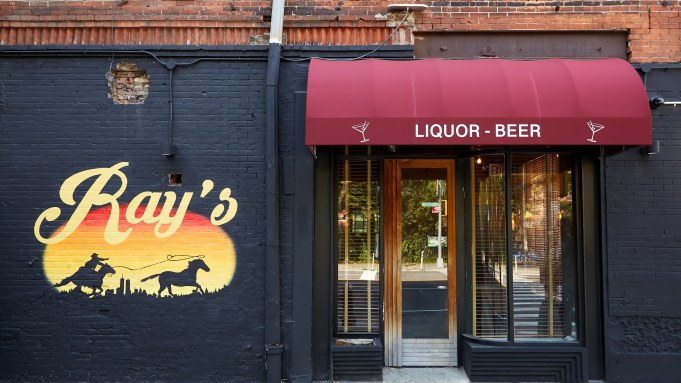 Many of New York’s iconic downtown dive bars have closed their doors in recent years thanks to a cocktail of reasons — rising rent prices, gentrification, the inevitability of change — but the appeal of those bars remains. The customers who frequented shuttered locales such as Mars Bar or St. Jerome or any other number of establishment are older and nostalgic, and sometimes those customers have become restaurateurs themselves and have the ability to open a dive bar of their very own.

The newest addition to the Lower East Side nightlife scene is Ray’s, a self-described “divey dive bar” intent on becoming an easygoing and unpretentious local haunt. The bar, open July 19, is a collaboration between some of downtown’s buzziest builders: Golden Age Hospitality’s Jon Neidich, Taavo Somer and Carlos Quirarte and Justin Theroux, an erstwhile New York bartender himself. The bar takes over the space from Quirarte and Somer’s previous project, Le Turtle.

“Honestly, I’ve want to do a bar exactly like this for years. When Taavo and Carlos decided to refresh the Le Turtle space, they asked if I wanted to help concept and operate what has now become Ray’s,” says Neidich over e-mail, whose hospitality company leads the project. “We spoke a lot about what was people really want from nightlife these days.”

The quartet settled on a Western rock-‘n’-roll vibe, channeled through their bar’s fictional cowboy proprietor Ray, who is depicted in a mural painted by L.A. artist Matt McCormick on the bar’s exterior.

“Many of our favorite bars were named after the owner — and often enough, they were the ones looking after you at the bar. It conveys a vibe of simplicity and a lack of pretension,” says Neidich, who references his time spent at Lucy’s in the East Village. “Ray himself is the essence of this bar; we wanted to create a space where guests would come and drink away their troubles at the end of a long day.”

This isn’t a place with a high-concept cocktail menu; there’s no menu at all. Ray’s was designed using many unfussy elements of a local bar — there’s a pool table and juke box, low-key banquets and seating designed for comfort, vintage detailing and interior wood paneling with the team has coined “Dad Paneling.” Despite the riffs on a dive bar, though, make no mistake: it’s all an intentional and thoughtfully curated.

“We want our guests to interact with our bar team and make the place like a second home,” says Somer.

As for Theroux, the actor’s involvement in the project also ties into a nostalgic rumination of a different time in New York.

“Many of my formative years in New York were spent working and playing at downtown nightlife spots. So the fit doesn’t really feel that odd,” says Theroux, a friend of the group. He points to the trio’s various other nearby projects — Freeman’s, located just across the street from Ray’s, Acme, Westway and The Rusty Knot — as examples of places with a lived-in feel.  “Those places feel like they have always been there,” Theroux adds. “They never try to make a splash that ruins a block, so in that way, they’re downtown preservationists.

Where to Dine, Shop, and Party in Aspen This Summer

It Took Lisa Taddeo 8 Years and 6 Road Trips Across the U.S. to Write ‘Three Women’