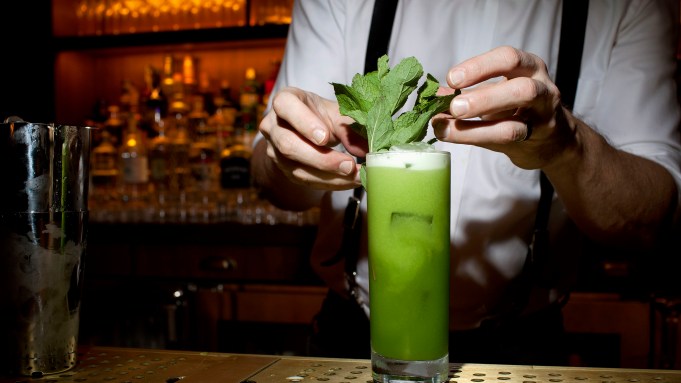 The line between work and play continues to get blurrier by the moment — and at Recreation, nightlife proprietor Jon Neidich isn’t making the distinction. Located inside the Moxy NYC Downtown hotel, the concept is a coworking space by day, and bar/lounge by night.

“We wanted to create something that was going to serve as the living room for the neighborhood, both as a nighttime venue as a super-fun low-key hangout spot, as well as a daytime [venue] for people to take meetings and have coffee and work,” says Neidich, who also runs downtown hot spots The Happiest Hour, Acme, and Tijuana Picnic under Golden Age Hospitality. “It’s kind of like the living room that you wish you could have, if you could afford 4,000 square feet in Manhattan.”

Mulling the concept of living rooms, Neidich began reflecting on basement rec rooms from the Seventies and Eighties. Running with the inspiration of a low-key hangout spot of his youth, Neidich’s team imbibed the entire space with a nostalgic, retro vibe, also outfitting it with a bevy of throwback games: a Pac-Man table, Skee-Ball machines, even a basketball court. (Unlike a basement, Recreation features high ceilings, a skylight and large windows, introducing natural light into the space.) The concept taps into Moxy’s play-and-games ethos; the hotel’s uptown location takes a more risqué approach to the concept of play at its rooftop lounge Magic Hour, run by Tao Group.

“On a personal level, I like the idea of there being ways to force human interaction outside of just having drinks with someone at the bar,” says Neidich. “People want to interact in more ways than perhaps they did before. I don’t know if it’s because technology has a way of connecting and yet isolating us. So when people go out, it’s even more important for them to have opportunities to interact around games or activities.”

(Of course, the space still offers plenty of technological access; there are outlets in the bar and in the floor to appeal to the coworking and “can you charge my phone behind the bar?” crowd.)

The cocktail and food menus also play into the throwback vibe, with communal consumption in mind; the small plates and flat breads are primed for sharing, as are a selection of “large format” punches, designed by beverage director Jim Kearns. For daytime, the space offers a full coffee and tea bar and breakfast menu.

The younger and hipper demographic continues to swell in the Financial District, and Recreation joins a growing legion of nightlife spots catering to the downtown-of-downtown set — Mailroom and Serge Becker’s Alley Cat Amateur Theatre are two recent openings in the Seaport District, while another coworking space, Assemblage, opened this summer, catering to the holistic wellness cohort.

“I think the Financial District is going through a real transformation right now where it’s really not going to be dominated by people who work in the financial world,” says Neidich, noting that Spotify recently took 400,000 square feet of office space one block away. (And don’t forget about Condé Nast.) Much of the clientele populating his other venues are already in the area; why not cater to them where they already are?

“One of the reasons we took this project is because I feel like there’s really a demand for something down there that provides people with a place to go and have a really good quality drink, without it being too serious,” Neidich adds. “Somewhere that has a chill, fun hangout vibe — which I think is something people like about our places, and I feel is lacking in that neighborhood.”