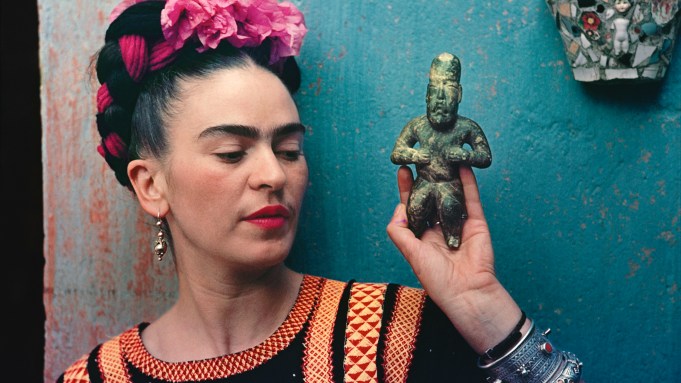 LONDON — The V&A is casting a new light on Frida Kahlo with its latest exhibition “Frida Kahlo: Making Her Self Up,” with an intimate insight into the artist’s life.

The show, which opens on June 16, features self-portraits, photographs of her taken by other creatives and friends, letters, clothing, jewelry and intimate possessions, such as her medicine and the corsets she had to wear to support her injuries and disabilities.

The exhibition charts Kahlo’s early years through a series of photographs taken by her father, Guillermo Kahlo, and goes on to take the viewer on a journey through her life, from the difficulties she faced after contracting polio at six, to her early marriage to Diego Rivera, her visits to the U.S., and her later years, when she had to live with a gangrenous foot and broken bones after being hit in a car crash.

Deep diving into the artist’s life from many different angles, the aim of the exhibition is to offer a new perspective of all the different facets in Kahlo’s life that made her into an artist and feminist icon.

“I think that the trajectory of Kahlo was having people notice her as a kind of flamboyant character for her dress. They didn’t notice her paintings, but they noticed her life story,” said Gannit Ankori, an art history and theory professor who specializes in Frida Kahlo and who acted as a content advisor on the exhibition.

“Over the past decade there has been a bigger focus on her work as an artist, and now we’ve come back full circle to bring together the full creativity of Frida Kahlo, which manifested itself in different ways. What we’re saying is that, yes, her art is extraordinary and the artworks have a lot of prominence in the show. But also seeing the other sides of that creativity: The way she decorated her home, the way she composed herself, the way she worked in collaboration with photographers to present herself, is a rare opportunity.”

Another focus was to show an empowered image of Kahlo, and to rewrite the language associated with disability: “It’s a topic that speaks to us today: There’s something about disability, especially in the world of beauty and fashion, magazines or even in the street. When you see someone who’s disabled, you tend to avert your glance. Here we’re actually showing the disability as something that can be looked at, and we can learn from it,” added Ankori.

She pointed to Kahlo’s medical corsets, which she transformed into art by painting on them and to a sketch that highlights the dichotomy between Kahlo’s vulnerable side and her flamboyant, colorful dresses.

In later sketches, Kahlo depicts herself with multiple faces and so the exhibition goes on to showcase how she composed different identities for herself, whether it was through art, traditional Mexican costume or makeup. She was known to favor Schiaparelli perfume and Revlon red nail varnishes.

“You have Frida Kahlo as part of her life and her times, but also obviously ahead of her time too, because today we all know that we have intersectional identities that we are constantly constructing through clothes,” said Ankori.

“From being a marginalized character — in the Thirties in the U.S. they wrote about Kahlo as Diego Rivera’s little wife who dabbles in art — she went on to became an icon, a role model for gender-fluidity and for people with disabilities.”

Claire Wilcox, senior curator of fashion at the V&A, said that in approaching the fashion section of the exhibition — where an array of Kahlo’s clothing is presented in a glass box surrounded by her self portraits — the focus was to show how interchangeable the pieces were and their different provenances.

Kahlo collected items such as shawls, shirts or bright long skirts from around the world, including Europe, Oaxaca or Guatemala. “We also wanted a mannequin that would suggest Frida as a somehow timeless figure, who was here but not here, that feeling of being present but not present,” added Wilcox.

The exhibition will run from June 17 until November 4 and the opening was marked with a cocktail at the museum, attended by the likes of Salma Hayek, Yana Peel and Alice Temperley.