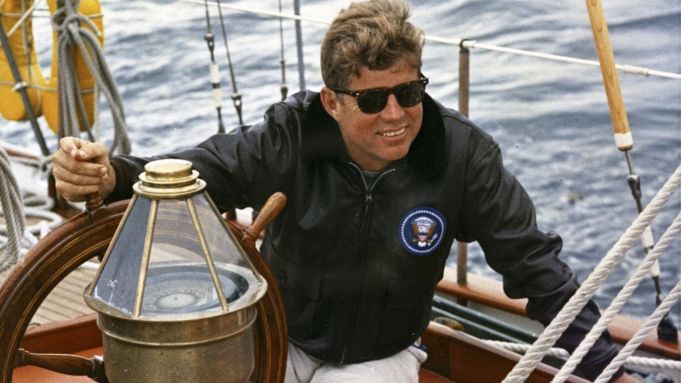 “The Kennedy style.” Three words that capture not only an era, but an effortlessly suave way of dressing that made John F. Kennedy arguably the most sartorially influential person to ever hold the presidency.

When it comes to matters of fashion, most of the focus has always been on Jacqueline Kennedy, but her husband’s version of New England preppy has been equally influential over the decades. For those who knew Kennedy — whose 100th birthday would have been May 29 — it was a general apathy toward his appearance that contributed to his allure.

“I never saw him where I would say anything other than that he was a man of style,” notes William vanden Heuvel, who worked for Robert F. Kennedy and became a part of the family’s inner circle in the Sixties. “He didn’t spend any time trying to figure out [his appearance], but he had it naturally.”

Whether sailing off the coast of Hyannis Port or hosting a glamorous black-tie dinner at the White House, Kennedy’s innate charisma and charm were merely enhanced by the approachable way in which he outfitted himself. “JFK was almost unaware of clothes being of any great importance,” remarks Deeda Blair, whose husband served as U.S. Ambassador to Denmark during the Kennedy administration. “He always was well dressed and I would even say distinguished, but effortless and easy — unremarkable ties and I suspect no fussing about pocket squares.”

Blair recalls Kennedy’s clothes as “not memorable, clean-cut [and] uncomplicated.” While Jackie was famously concerned with her appearance — often having designer Oleg Cassini duplicate for her the latest French designs — the President was often more interested in conversation and intellect, according to Blair. “One does not think of clothes as being part of his identity. He was about a kind of restless energy, ideas [and] intelligence. He truly — like his sister Eunice and brother Bobby — had a questing and questioning mind. At dinners in Hyannis, every other sentence began [with], ‘What do you think of…?’”

Undoubtedly influenced by the intellectually elite circles in which he ran, Kennedy relied on certain wardrobe staples throughout his life. “He often wore other brands, but from his college days his everyday wardrobe — his shirts and chinos and underwear — was Brooks Brothers,” says Kelly Stuart-Johnson, the company’s brand historian.

After taking office in 1961, the top brass at the American company noticed how the President’s suit choices were not flattering to his slender frame. “Because of Kennedy’s body type, we looked at the way he looked in our suits and said, this really isn’t going to do for this man,” continues Stuart-Johnson.

Rather than approaching Kennedy outright, Brooks Brothers specially designed and produced a new slimmer style that was then suggested to the President. “We had toyed with the No. 2 [style suit] for a long time, but we adapted this particular suit thinking of [him],” says Stuart-Johnson.

A 1961 ad described the newly launched two-button No. 2 suit as “smaller over the hips” with trousers “cut smaller in the waist and seat.”

In the 19th century, Brooks Brothers gave the same subtle suggestion to Presidents Abraham Lincoln and Ulysses S. Grant by publicly offering cuts thought to be more flattering to their bodies.

From touch football games in faded chinos to seaside lunches in a cotton oxford shirt, Kennedy’s attire represented both an aspirational and athletic lifestyle. “This is not the guy who is standing in front of his mirror to make sure both of the cuffs match on his sleeve,” adds Stuart-Johnson. “If you think of the Presidents that came before him and after him, he was certainly the most youthful and most associated with an active lifestyle.”

Beginning this month the public will have a firsthand opportunity to view many of JFK’s previously unseen personal effects — including his Polaroid brand sunglasses and monogrammed cufflinks — in a special exhibition at the John F. Kennedy Presidential Library & Museum in Boston. The exhibition, which runs through May 2018, features exactly 100 items that present a more intimate view of Kennedy.

The library’s extensive collection, which includes over 100 of the President’s neckties, was carefully edited for the exhibition. “We’re showing about seven of [his ties] designed by Brooks Brothers, Christian Dior, Oleg Cassini and Abercrombie & Fitch,” explains JFK Library curator Stacey Bredhoff. One such tie in crimson silk gives a nod to Kennedy’s love of knowledge with the word “think” subtly printed in repetitive block letters.

“President Kennedy is such a towering historic figure,” she adds. “We wanted to let people see him as a human being, as a father and as a husband through these objects.”

Although often taking an indifferent approach to his wardrobe, Kennedy was acutely aware of the times when clothing mattered most. “It was he who decided to wear not just a business suit, but a morning suit at his inauguration,” notes Bredhoff of the President’s formal attire. “He had an eye for the dignity and monumentality of the moment.”

John F. Kennedy’s personal style continues to be influential more than 50 years after his death. WWD spoke to some of America’s top men’s wear designers about why JFK’s sartorial legacy remains so strong.

Tommy Hilfiger: “Going to Hyannis [in the Sixties and Seventies] was very exciting because everybody thought they could spot a Kennedy. The way they dressed was more American aristocratic. We thought that was very chic and it was aspiration as well as inspirational. If you take pure preppy as a base, it was my motive to make it more fun and exciting.”

Michael Kors: “Even when he was in a formal environment, he had the sunglasses, the skinny tie, the complementing separates instead of a full suit — nothing ever felt forced. His cool confidence, combined with his charisma, smile and all-American spirit, gave everything he wore a sense of relaxed polish. It’s that mood that continues to inspire men’s style today.”

Joseph Abboud: “He exemplified that Northeast preppy — and he was preppy before they had the word preppy — it was collegiate and traditional, but with incredible style. In my opinion it originated from the Northeast — Harvard, Yale and that kind of community, which is intellectual dressing. It’s professorial and has a lot of gravitas. It’s not fashion and for me, it’s more about style than fashion.”

Todd Snyder: “I put him up there with the likes of Paul Newman. He had a look and it seems like we all reference it. James Dean had the same thing and those are actors, but this guy led our country. I’m an American designer and I’m very proud of American style because I think it represents independence and originality. You’re not necessarily taking everything from the Brits or Italians — you’re doing it your own way. The way JFK dressed showed America how a young man should be dressing.”