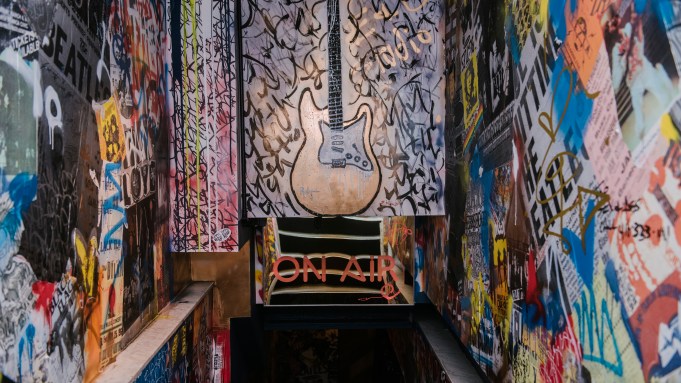 “The two kids that are downstairs right now, I have no idea where we met them,” Kevin King explains from the light-filled dining room of his new restaurant, Esther & Carol, a few hours before its friends and family debut. He’s referencing the two young musicians currently tinkering with instruments set up in their coordinating downstairs lounge E&C Studios. “They’re straight from Berklee music school, so we let them rehearse for free,” he continues. “We want to build a community of people, build a space downstairs that is for everyone. From if Lenny Kravitz walks in and he wants to grab the Gibson guitar off the wall and play, great. But then when the 22-year-old kid down there now comes in and wants to rehearse, do it.”

It’s not too unlikely a scenario — between King and E&C co-owner Cordell Lochin, the two have amassed an impressive contact list through their decade-plus years working in the downtown nightlife and restaurant scene. King spent 13 years working as maître d’ at Balthazar and, most recently, at The Standard Hotel’s Narcissa; Cordell was heavily involved with La Esquina and cabaret The Box during its buzzier years. “We want everything to slowly build — I believe in longevity of a place,” King adds. “We wanted to build a place where you don’t have to go anywhere else but here. Anything you would want from a night out, we have in one space.”

The space is split between the full-service dining room, a fast-casual takeout window and downstairs lounge, which has a rock ‘n’ roll vibe and is equipped with a small stage of instruments and studio recording facilities. While they aren’t planning to advertise use of the studio located within their downstairs lounge E&C Studios, they’re open to opportunities that arise organically; they think of the space as a living room that guests can visit pre- and post-meal.

The menu at Esther & Carol leans toward healthy options without being explicitly “healthy” fare. “Thinking about food culture, right now you see so many restaurants where they focus so much on health, but then at the end of the day what you really want to eat is that gluttonous comfort food. So we decided lets put something in the middle,” King says. “We’re not looking to scream to the world, ‘Hey, we’re farm to table, we’re organic.'” The fried chicken, for example, is fried in expeller pressed sunflower oil; fried artichokes pepper a Caesar salad in place of croutons.

The dining room is situated on a sunny corner of Bowery and Broome, which the floor-to-ceiling windows take advantage of. The room was designed by their friend Antonio Tadrissi of Prototype Design Lab in Toronto and is reflective of the turn of the century, which Lochin references as “an important time for our nation to define to the rest of the world American culture.” The room features design elements reflective of both the Art Deco era and Industrial Revolution, with a curved wooden sculptural bar splitting the room. Lithography metal prints of important personalities from the early 1900s. “It’s also around the time when a lot of these dishes were invented and popularized. We wanted to rethink those dishes from that time period an modernize them,” Lochin continues. “It’s all a modern take on what originally made America great.”

Their official opening date of May 14 — Mother’s Day — is particularly fitting: The restaurant is named for their mothers.

“We were actually sitting in [Lochin’s] apartment one day just throwing names back and forth, and this epiphany came, like, ‘Let’s call it Esther & Carol.’ We just decided to name it after our moms,” King says. “Two strong women bringing up two guys in New York.”