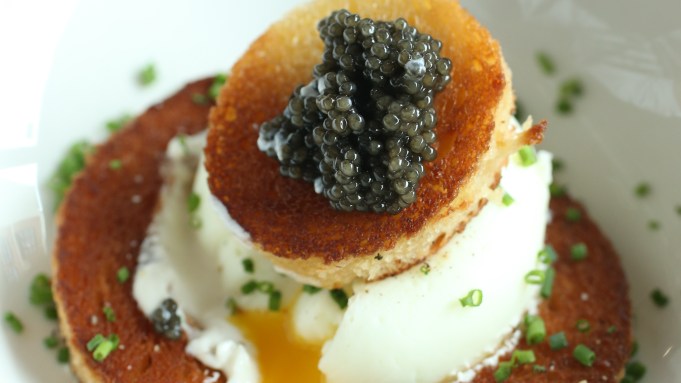 “It was first a seed six years ago,” said chef Patrick Connolly, perched against Rider’s window frame a few days before opening. The Williamsburg restaurant had originally been slated to debut in early January, but really the delay has been much longer.

Connolly was approached several years ago, when National Sawdust was under development. The owner of the space was looking for someone to helm the restaurant that would be adjacent to the music performance venue. The project ended up being put on hold. “We got lost for a while,” Connolly said. He and his wife moved to St. Louis, opened a restaurant and had a baby. As construction on National Sawdust began to amp back up, so did plans to open Rider, drawing Connolly back to the East Coast.

The menu at Rider, which bills itself as a “contemporary bistro,” is heavy on vegetables and shared plates. “It’s a little bit like greatest hits,” Connolly explained. “I’m not really sticking to any particular style. I’m trying to give life to this notion of an American restaurant, something that’s uniquely American that’s derived from my influences and people I’ve come across, and people I’ve cooked with,” he continued. “The main thing is it’s stuff I like to eat.”

The bi-level dining room channels a post-industrial vibe through raw wood detailing, concrete veneer and exposed brick. It was also crafted to reflect its musical partnership. Connolly enlisted the same architecture group that designed National Sawdust, and as inspiration gave them the bassline from Brooklyn native Lou Reed’s “Walk on the Wild Side.”

“It’s simple, but textured, deep and dynamic,” explained Connolly. “I wanted the first floor to represent a punk band in the Eighties on their first tour.” The upstairs space, meanwhile, is darker and plusher, representative of a green room where someone more advanced in their career — say, Keith Richards — might be put up while playing a larger venue.

Although the restaurant is distinctly Brooklyn, Rider has carved a space that’s original.

As Rider’s floor staff began streaming in the door to prepare for a pre-opening dinner service, musicians were inside warming up for the evening’s performance. “I kind of get the best of both worlds,” Connolly enthused. “We have a really cool event space to do events, but it’s also just a really cool little restaurant in Brooklyn.”