Giorgio Armani on Dubai, Post-pandemic Realities and Being a Voice in the Desert

Thanksgiving dinner has yet to be served, but Rihanna already has holiday footwear on lock. The pop star-turned-designer is releasing a holiday collection with Stance — where she’s a contributing creative director — and it’s festively titled “Thottie or Nice.”

The line — Rihanna’s ninth with Stance — comprises nine offerings. It centers on preppy, grade-school styles — in keeping with the theme of the Fenty Puma by Rihanna fall 2017 line — in holiday hues such as red, black, cream, navy and burgundy. There are three over-the-knee offerings, two of which feature an added touch of Christmas kitsch, three anklet roll cuff socks with Fenty embroidery and three crew socks, one of which is emblazoned with the fan-made “Rhenna” stick figure illustration. 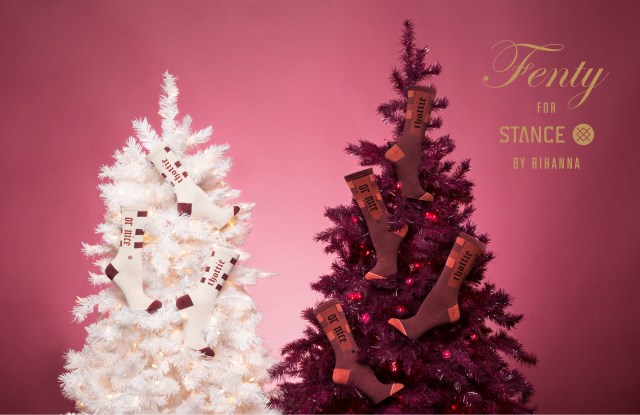 The collection was made available today on Stance.com and at the Stance flagship in SoHo. Prices range from $14 to $24.

Rihanna and Stance released a line of her most “Iconic Looks” in August. Featured in the collection were her outfits from the “Pour It Up” and “Work” music videos, the Adam Selman Swarovski crystal dress she wore to the 2014 CFDA Awards and the Guo Pei gown she wore to the 2015 Met Gala. Last week, she appeared on a joint track with N.E.R.D called “Lemon,” the first release from the group’s forthcoming album. The drop was timed with the announcement of Adidas’ partnership with N.E.R.D on an 88-piece line called “Training Gear.” You can see all of the looks from that collection here.