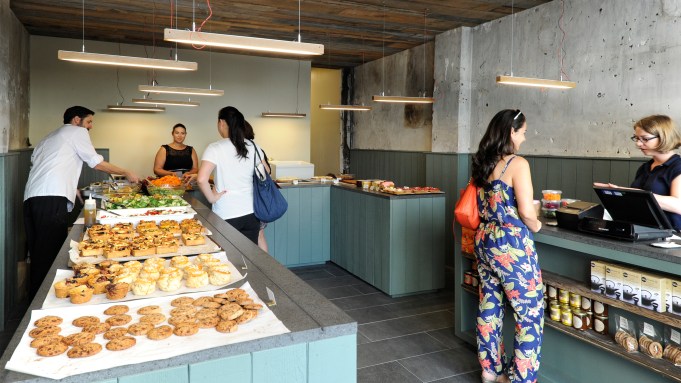 Diners would have to arrive early, squeeze past the mobs coagulating around the takeout counter, and hopefully snag one of the few tables, around which was likely stacked bags of flour or sugar.

And then came the endless parade of young waiters — most of them brand new to France — ferrying plates of bread, glasses of juice, jugs of filtered water and slices of carrot cake.

A magnet for the fashion crowd, the place has been bursting at the seams practically since the day it opened in 2002.

Now, finally, owners Rose and Jean-Charles Carrarini have expanded threefold, opening a separate storefront nearby for takeout and another one for groceries, the latter selling English teas, chocolates and farm-fresh organic vegetables, with a juice and coffee bar at the rear.

Collaborating with architect Emilie Bonaventure, they also overhauled the decor of the original 40-seat eatery – from New York industrial cool to cozy English pub – and are extending the hours to serve breakfast, lunch and dinner, along with an expanded wine list.

“We had a crazy place, and now we are making a calm place,” said Jean-Charles Carrarini, leading a tour of the revamped restaurant as his chef wife shuttled between a trio of steamy kitchens set at the back of the venue.

Carrarini balks at the word “restaurant,” which connotes formality and ceremony in France.

“For me, it’s not an event to eat at Rose Bakery,” he stressed. “We just want people to relax a bit, and eat well — good, proper food.”

Indeed, the café still has a no-reservation policy, although a communal table for 12 in a small anteroom can be booked for large groups.

On the side, Rose Bakery also boasts a sizable catering business, which Carrarini reckons is “99 percent” for fashion-related clients. “We feed designers. That’s what we do. And many, many photographers, so we do a lot of shoots,” he said, describing Paris Fashion Week as “a crazy time, just mad.”

Given that Rose Carrarini is the sister of Adrian Joffe, president of Comme des Garçons International and chief executive officer of Dover Street Market, the connection brought many fashion people by word-of-mouth to the original location. And the eateries have multiplied in flagship locations of both retail banners, in Tokyo, Seoul, New York and London.

But only after Rei Kawakubo, ceo of her Japanese fashion empire, had tested the catering for one year, Jean-Charles Carrarini related.

The couple closed its Rue Debelleyme eatery in the Marais to focus on the expanded Paris mother ship. Rose Bakery also continues to operate branches in Le Bon Marché and the Maison Rouge museum in Paris.