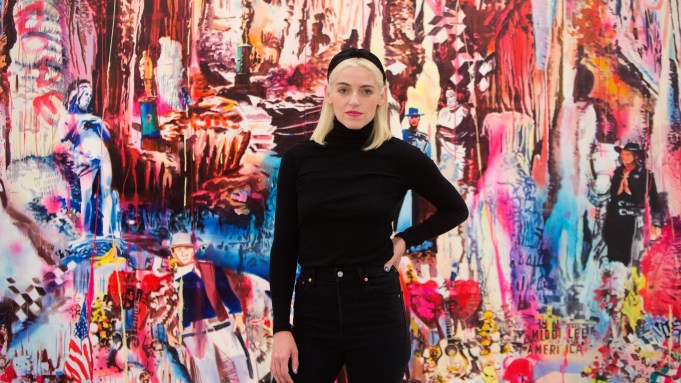 Rosson Crow’s solo exhibition of new paintings at The Hole Gallery in New York started with her thinking about the rapture. Specifically, the aftermath of the rapture — or apocalypse, depending on your preferred destruction narrative — in a border town.

“Thinking about this instance of everyone being raptured in either heaven or hell, and all of the detritus and ephemera that’s left behind, all the trash and cars and signage,” she says of the first painting she created for the show, collectively titled “Trust Fall.”

“The thread that pulls all this work together is this idea that I’m interested in, how I feel like we’re experiencing the loss of trust of anything in society, and losing the ability to believe in anything: to believe science, politicians, leaders, medicine — everyone questions everything. And what is truth, what is fact, what are lies?”

Each of the large-scale paintings explores threads of that question through various pop culture moments transformed into their own highly specific worlds. She collages imagery through painting and photo transfer, creating trippy scenes which explore the current cultural temperature in America. In “KonMari,” she painted the bags of clothing she set aside at the start of the year to donate, but which sat on her floor for months. For “Putt Putt Golf Course on White Sands Missile Range,” she reimagines the military testing area as a carnivalesque funland, undermined by the sinister undertones of the American military.

The religious thread meanders between paintings, showing up in several as Greek mythology as Crow reflected on gods of the past. In “Offering to the Gods,” her imagined contributions include fruits, stuffed bears, clocks, American flags, and piñatas.

“In the future, will we worship totally different gods than we worship now — who’s to say?” she says. “Then I was thinking about a society that’s desperate for answers and understanding and what they would offer to the gods to try and understand. So like, ugh, please we’re giving you some old fruit and stuffed animals and clocks and American flags and this is the best we have to offer but please help us give us answers. Which also feels very timely.”

In a different sort of gallery down in D.C., politicians and the greater American public are also trying to parse out answers and understanding. “I was watching the [John] Solomon testimony this morning, and holy s–t — it’s insane. It’s actually insane. It’s completely insane,” she says of the ongoing current impeachment hearings. “I was saying this morning…this is better than ‘Succession.’ I love that show, but it felt like you can’t make this stuff up.”

Which leads straight to the “Cave of the Cancelled.” In a neon-drip haze surrounded by stalagmites, representations of masculinity, toxic and not — cowboys, old Greek statues and philosophers — are gathered in a cave surrounded by angry graffiti: “Bye B—h,” “Done,” “Goodbye.” Toward the bottom of the painting, she offers a quote from a National Enquirer from the Sixties: “It says ‘torturing women is the greatest pleasure I get out of life,’ which is from Alfred Hitchcock.”

“But then there’s also at the bottom here almost tributes that I imagine family members of the canceled could come and visit representations of their loved ones and leave little tributes, so it’s a painting of a complicated issue,” says Crow. “Obviously some people need to be canceled, but I also think that it’s sometimes a problematic response to something that you don’t necessarily like. But I think it’s an interesting thing that we’re living through now, this whole idea of cancel culture, and how that’s affecting teenagers in high school and not just on the scale of celebrity. It’s just an interesting thing that has two sides to it, so this is mine.”

Crow has been based in Los Angeles for the past 10 years, and “Trust Fall” marks her first solo show in New York in almost a decade; her last was at Jeffrey Deitch Projects. Her paintings are big and bright, and iconography of the West — cacti, cowboys — pop up throughout.

“They are exuberant and happy, I want them to have that feeling, but they’re also about this darkness, so I like the double-edge sword to that,” she says of her interest in layering the beautiful with agents of destruction. “I’ve always been fascinated with the West, because I feel like it’s a really integral part to American history and understanding who we are as a people in a way — this whole expansive part of our country and this American ideal of manifest destiny. Which is problematic in its own way, but it is our history.”

In another painting, “A Man and His Audience,” a cowboy sits facing a cast of Nineties-era cardboard cutouts of celebrities including Prince, Oprah and Madonna, and a covered wagon looms in the background.

“Is this man really from the 1800s traveling across the West and he somehow has cutouts he brings with him in his wagon? Is this a movie set and he’s an actor taking a break and these just happen to be on set? Are these people representations, and he’s hallucinating his audience?”

Crow doesn’t offer any definitive answers, only options. Like any trust fall — or rapture, or apocalypse, or whenever you’re at the mercy of any higher force — you just have to believe there will be something to catch you on the other side.

An Inside Look With Artist Ragen Moss