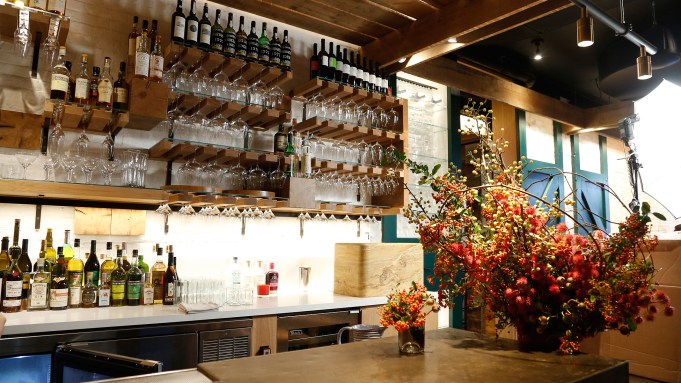 Remember Rouge Tomate? Formerly located on 60th Street, across from Barneys New York and near the Ralph Lauren corporate offices, the health conscious and Michelin-starred restaurant was a favorite dining option for many in the fashion industry. But the effect of rising New York real estate costs ran its course; the restaurant closed its doors in 2013 and planned to reopen the concept in a more economical space. Three years later, Rouge Tomate Chelsea has finally opened its doors.

Their new iteration is located inside a landmarked building, a former double carriage house. The restaurant taps into the same ethos of its former location, but takes on a more rustic, homey atmosphere through copious exposed wooden features, white brick walls and forest green doors, and smatterings of fall foliage. A glass mural featuring a print of trees was installed from their previous location, acting as a bridge between old and new.

The menu has been revamped, but adheres to the restaurant’s founding philosophy of offering healthy, sustainable options with a fine dining touch. “We had this really lucky opportunity to say, ‘OK, what did we do really well at the old Rouge, and how can we move that forward?'” reflected executive chef Andy Bennett, who worked on the restaurant’s opening team from 2008 to 2010 before returning in 2014 to lead the kitchen in its new space.

After closing uptown, the restaurant originally expected to reopen within a year; the process ended up taking two years longer than expected. “I think it’s worked in our favor,” Bennett continued. “If we’d opened really quickly, we’d have gone into this almost continuum of what we’ve done before, instead of stopping and really looking at it.” During the interim, Bennett spent time conceptualizing and testing dishes for the new restaurant, as well as running special events and consulting for friends in the industry. At the beginning of this year, Rouge Tomate began renting a test kitchen space at the Hot Bread Kitchen incubator to develop the new menu.

Only one dish has carried over from uptown — the mushroom tartare, a vegetarian option which has found appeal outside of plant-based eaters, since the texture references that of meat tartares. “I always look at it as breaking down the perception of what healthy food can be. Mushroom tartare sets up great that way, because it exceeds the expectations of what you’re given,” Bennett explained. “We’re trying to find healthy vegetable-focused ways to do things, but be creative and show that they can be delicious.” While the restaurant emphasizes nutritional quality on the menu, the menu isn’t limited to plant-based options, opening up to dishes such as amberjack crudo in an aromatic curry sauce, chicken liver with snails and grits, and venison with huckleberry.

In its former iteration, Rouge Tomate earned a one-star Michelin rating — attractive currency for a chef, but Bennett stressed that maintaining that accolade isn’t his focus. “The goal is to still execute at the same level, the philosophy is the same,” he said. “It’s almost kind of cliche in a sense, but if we create an amazing space, amazing food, amazing beverage and hospitality, and guests are happy, that’s what we should focus on. If we get [a Michelin star] because of that, that’s amazing.”

The restaurant also places a strong emphasis on its beverage program led by master sommelier Pascaline Lepeltier, who has been an advocate for biodynamic and organic wines. The revamped wine list continues on that theme, and represents wines from more than 14 countries. Fresh juice cocktails are also on offer.

“The idea was really to expand the program in terms of quality and quantity,” Lepeltier explained. “We spent a lot of time really working on the sourcing and with the idea that we can push the boundary, especially in terms of the farming practices of the people we’re working with without compromising the taste.” And even in the years they were closed, recognition for the genre has continued to grow and improve among American customers; Rouge Tomate no longer designates their biodynamic and organic varietals on the menu. “For us it’s obvious, it has to be the way,” she said. “I don’t think you have to justify it anymore.”