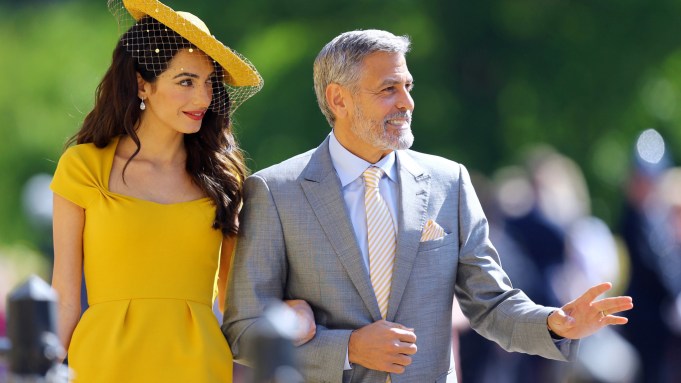 WINDSOR — Stars from the galaxies of fashion, sports, Hollywood — and the British upper class — arrived at St. George’s Chapel in Windsor before the leading lady herself, Meghan Markle, stepped out of her car and down the aisle in a Givenchy Haute Couture dress by Clare Waight Keller.

Early Saturday, Queen Elizabeth gave Prince Harry the title of duke, per royal tradition on the wedding day. Harry will now be His Royal Highness The Duke of Sussex. Following the wedding ceremony, Markle become HRH The Duchess of Sussex.

“The Queen has today been pleased to confer a Dukedom on Prince Henry of Wales. His titles will be Duke of Sussex, Earl of Dumbarton and Baron Kilkeel,” said a statement from Kensington Palace.

The Sussex title is an old one, and the last prince to hold it was Prince Augustus Frederick, the sixth son of Prince George III who supported the abolition of the slave trade and was known for his liberal political views.

For the wedding, both Prince Harry and the Duke of Cambridge wore the frockcoat uniform of the Blues and Royals. Both uniforms were tailored at Dege & Skinner on Savile Row.

Victoria and David Beckham were also among the guests, as was the Argentinian polo star Nacho Figueras and his wife Delfina Blaquier. Pippa Middleton was there, too, dressed in the British label The Fold.

Markle’s fellow cast members from “Suits,” were also among the guests. Cressida Bonas, a stage actress and Harry’s old flame, arrived at the chapel wearing the British designer Eponine London.

David Beckham wore Dior Homme by Kim Jones while singer James Blunt headed to the chapel with Sofia Wellesley, who was dressed in an ankle-length floral REDValentino dress.

One of Markle’s closest friends and her favorite stylist, Jessica Mulroney, kept her allegiance to Canadian brands, wearing a cobalt blue cap-sleeve tea-length dress from the Montreal-based Di Carlo Couture.

Mulroney recently cinched a job at Hudson’s Bay as a fashion and bridal specialist. She will also be an ambassador for the Core Life label that launches this fall. Mulroney befriended Markle a few years back when the actress relocated to Toronto to shoot “Suits.” Mulroney’s daughter Ivy, and twin sons Brian and John, were on their best behavior Saturday as part of the procession.

Queen Elizabeth wore a bright lime dress and coat by Stewart Parvin and an Angela Kelly hat, while Markle’s mother Doria Ragland donned a dress and day coat made by the creative directors of Oscar de la Renta, Fernando Garcia and Laura Kim. Ragland’s shoes were designed by Edgardo Osorio of Aquazurra, while her hat was by Stephen Jones.

The Duchess of Cambridge wore an ivory Alexander McQueen coat dress — the same one she wore to the christening of Princess Charlotte in 2015. McQueen is the label of choice for the Duchess’ milestone moments: She not only wore McQueen for her wedding, but also for Prince George’s baptism in 2013.

The four page boys were dressed in miniature versions of the Blues and Royals frock coat, while the six bridesmaids wore Givenchy Haute Couture dresses and white leather Aquazzura shoes etched with their initials and the wedding date.

The wedding, which was at noon local time, saw 2,640 invited members of the public joining the guests on the grounds of Windsor ahead of the ceremony.

The service was overseen by the Dean of Windsor, the Rev. David Conner, while Archbishop of Canterbury Justin Welby married the couple. The newlyweds then took a carriage ride through Windsor to greet the crowds before heading off to a lunch reception hosted by Queen Elizabeth at St. George’s Hall.

The couple rode in an Ascot Landau, a horse-drawn carriage, which is used for Queen Elizabeth’s procession during the Royal Ascot Race as well as other royal events.

In the evening, Prince Charles will host 200 close friends and family at Frogmore House on the grounds of a private royal park on the eastern side of Windsor Castle. The couple has enlisted Alexi Lubomirski, a former assistant to Mario Testino, who took the couple’s engagement photo, as the official wedding photographer.

Harry proposed to Markle last November over a roast chicken dinner at their cottage on the grounds of Kensington Palace, giving her a three-stone engagement ring that he designed himself. The center stone is a diamond from Botswana, where the young royal founded the children’s health charity Sentebale with Prince Seeiso in 2006.

The two outside stones are diamonds from Princess Diana’s personal collection. The gold ring was made by Cleave and Co., Court Jewellers and Medallists to Queen Elizabeth II.

The couple also chose Cleave and Co. to make their wedding rings. “Ms. Markle’s ring has been fashioned from a piece of Welsh gold, gifted by Her Majesty The Queen,” according to Kensington Palace. “Prince Harry’s ring will be a Platinum band with a textured finish. Both rings were crafted in the Cleave workshop.”

The Royal Wedding Dress Code: What is a Prince to Wear?