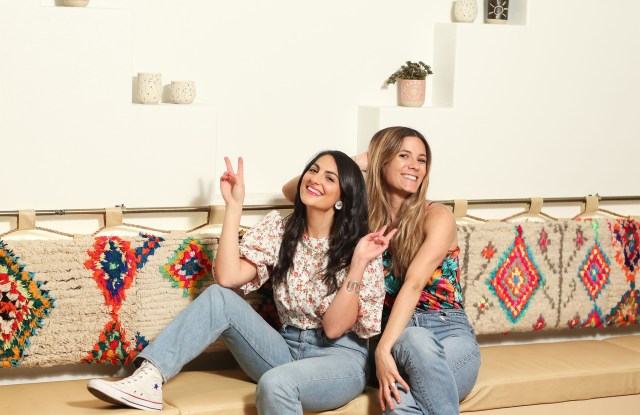 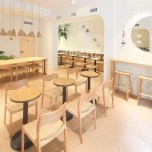 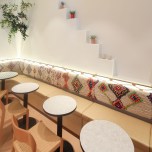 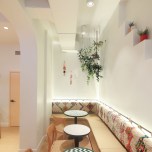 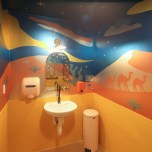 She’s put her stamp on vegan and Italian within the fast-casual restaurant realm, and now Sam Wasser is taking on Middle Eastern cuisine. The young restaurant developer is opening her third concept in collaboration with TV personality Eden Grinshpan, after Grinshpan reached out about the concept.

“When we first met we just realized we had a million friends in common, and what we realized early on was that our styles are really similar, and that we both understood completely what the other person’s goals were for the restaurant,” says Wasser from the airy dining room in Nolita.

“Basically, Dez is what Eden cooks for other people — what she cooks in her home for her friends and family. I was like, wow, that’s exactly what I want to eat. And I kept thinking, where can I actually go get that food right now?” she continues. “And there was really no place that I could think of that offered our offerings.”

The cuisine is Middle Eastern, with tweaks in line with Wasser’s branding aesthetic that she’s cultivated at earlier projects By Chloe and The Sosta; beet hummus and rose lemonade take on an Instagram-friendly pink hue, and there are plenty of options for the gluten free-vegan-vegetarian customers. Wasser notes the Sumac Fattoush salad, with basil, mint, baby kale and watermelon radish, as a current favorite on the menu.

“I really tried to incorporate as much of Eden’s food and personality into the branding,” adds Wasser. “I think Dez is completely unique from what’s out there currently in the fast-casual market and it really has a fun, whimsical personality to it which is what we were going for.”

The restaurant is located on a lively stretch of Mulberry Street in SoHo, with large windows that enable the space to be bathed in natural light. Similar to the other restaurant spaces she’s helped shape, Dez is warm and inviting with pops of color and appealing design details.

“We really wanted to create a space that would translate well from morning, noon to night, so we have some candles that will light up this Moroccan courtyard vibe that we created,” she says. The team enlisted the help of interior designer Jeanette Dalrot, who worked on the nearby pink-hued Pietro Nolita.

“I didn’t want such a loud space, but I wanted it to be understated and beautiful and have all these intricate details, and not just be like, ‘Whoa — that’s Middle Eastern’ when you walk in.”

Subtle references to the cuisine are integrated throughout the space, including a banquette that is upholstered in vintage Moroccan rugs with neon accents, plants hanging from macramé pots, handmade pots etched with Dez’s icons and a colorful desert mural in the bathroom. A line of Dez-branded merchandise riffs on Nineties nostalgia, with branded slap bracelets, bucket hats, tie-dye shirts and color-changing water bottles for sale.

“Eden and I are such nineties babies,” says Wasser. “I’m excited to see people walking down the street with Dez bucket hats.”

If not the street, you’re at least bound to see it on your Instagram feed.