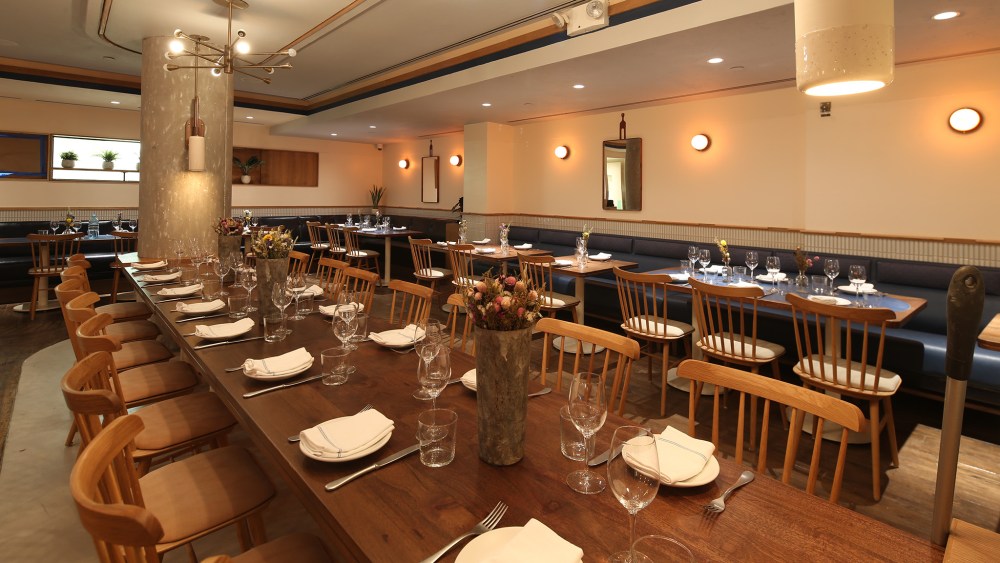 A circular saw screams out a shrill cry. The custom-crafted interior of Scampi is literally buzzing Monday afternoon in preparation for its Wednesday opening, with finishing touches being made to the interior.

“This will all be finished by Wednesday,” asserts Calapa of his 30 West 18th Street space. For the Texas native, Scampi has been a lifetime in the making. Even its name is a nod to a Gulf Coast dining destination of his youth. “It’s a little bit of nostalgia,” he explains. “I want you to feel like you’ve sat down at the dinner table in my home.”

To achieve this upscale yet welcoming environment, Calapa enlisted New York-based firm Parts and Labor Design under the direction of cofounders Andrew Cohen and Jeremy Levitt. The space boasts rich neutral tones of white oak, handblown rose-colored wall sconces and geometric hanging pendants in brushed brass and white porcelain. Their goal, according to Levitt, was to fuse a “Mediterranean seaside component” with “postmodern Italian design.”

“Even though it’s a small space, we want people to have a multifaceted experience,” adds Levitt, whose other hospitality projects include Marsh House in Nashville, Tenn. and The Grey in Savannah, Ga. “It’s about cascading — the front is big and loud and fun and bright, but then it gets more intimate with the main and private dining rooms.”

Levitt, sipping a glass of bourbon, reveals it’s a sweeping oak front bar and adjacent 18-seat communal table that serves as the restaurant’s visual — and social — focal point. “It’s about people coming as a destination, but it’s also a meeting place for locals in the community,” he says. “You don’t need a reservation in the largest part of the space.”

For Calapa, maintaining a sense of approachability was tantamount to Scampi’s architectural and menu design. “I don’t want this to be a once-a-month or once-a-year restaurant,” he adds. “I want people to feel like they can drop in at any time with the bar being the energy center of the entire space.”

The main banquette-lined dining room is dotted with navy-topped tables and bouquets of dried flowers rest casually in tin cylinders. An additional communal table, this with 16 seats, divides the space. A circular glass porthole sits in the back wall and offers a  glimpse into Calapa’s bustling kitchen.

Signature menu offerings include sardines crudo seasoned with raisins and parsley, charred leeks with hazelnuts, and, of course, two types of scampi: traditional Italian langoustines in butter and the Americanized version with shrimp over pasta.

“I’ve spent all my years of training to land on this menu,” reveals the Culinary Institute of America alum. “I want it to feel very natural and very inviting, but understand that we’ve given thought to every single detail.”