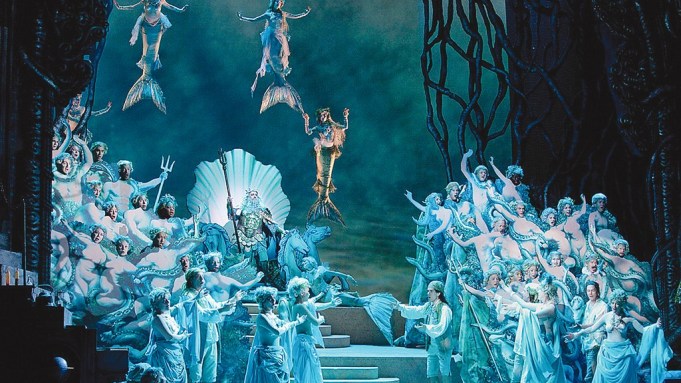 After all of last month’s holiday cheer, many are content to skip the small talk by taking in a little culture after work. Placido Domingo will hold the crowd’s attention in “The Enchanted Island” at the Metropolitan Opera Thursday night, and “Tosca” debuts Tuesday with Patricia Racette in the leading role.

Theatergoers can be among the first to see Jim Dale, Carla Gugino and Rosemary Harris in “The Road to Mecca,” which is in previews at the American Airlines Theater. And Cynthia Nixon can be found gearing up for the Jan. 26 opening of “Wit” at the Samuel J. Friedman Theater. Over at the Richard Rodgers Theater, Audra McDonald, Norm Lewis and David Alan Grier will headline “The Gershwins’ Porgy and Bess,” starting Thursday. Less proven talent can be found at the Under the Radar Festival, organized by The Public Theater and under way at various venues throughout the city through Sunday.

Five tons of hand-painted porcelain sunflower seeds have been shipped in for the installation. There were 100 tons in place when the Tate Modern in London staged the exhibition in fall 2010.

Each seed is different from the rest, but combined they create a unified look. The takeaway is meant to question the role of the individual versus the whole in contemporary China. That is a position Weiwei knows all too well. In April, the artist and human activist was arrested at the Beijing airport and held without formal charges for 81 days, an act that unleashed international protests. Once released, he faced $2.4 million in back taxes and fines. Government officials said Friday that he will now be allowed to appeal those penalties.

Out-of-towners and day-trippers looking to keep their New Year’s resolutions for fitness have all sorts of options.

Those who are short on time can hit Soul30, an all-out, 30-minute spinning class at SoulCycle, which has four locations in the city. Pure Yoga’s two uptown spots are whipping yogis into shape with Bassett’s Boot Camp, a combination of hot vinyasa yoga, cardio drills, strength training and core work. At Equinox’s 20 health clubs in the city, many are trying out Deep EXtreme, an hour-long class that combines yoga, cardio and modern dance. With three locations in Manhattan, Physique 57’s signature 57-minute class is said to burn up to 650 calories. (A new book, “The Physique 57 Solution: The Groundbreaking 2-Week Plan for a Lean, Beautiful Body” will help the newly converted keep their regime going once they fly home.) Lboogie Fit’s Lauren Goldberg will lead a 60-minute workout Saturday in a pop-up gym at Twelve21 at 12 West 21st Street.

From William Greenberg’s Madison Avenue shop to the Duane Park Patisserie downtown, customized sweets are catching on, with more sugar fiends requesting their favorite treats in specific colors and designs.

Apparently, Issey Miyake has a sweet spot for Lady M Confections, which provided “Disco Choux” — basically cream puffs with sparkles — for the 10-year anniversary party at the designer’s TriBeCa store last month. Until Lady M’s second shop opens in The Plaza this spring, fans can treat themselves to a slice of the milles crêpe or green mousse cake at the Upper East Side location.

Stella McCartney’s New York staff orders cupcakes from Twelve Oaks Bakery from time to time, complete with the Stella logo on top. Founders Caroline Saudek and Katherine Coyne consider themselves “concierge bakers,” as in you name it and they will bake it. Yeohlee Teng, Yigal Azrouël, Victoria Bartlett and Vivienne Tam have lined up Kyotofu for backstage catering, but nonmodels can find the pumpkin pound cake, chestnut cupcakes and gluten-free sweets at its Hell’s Kitchen dessert bar.

NEXT: Away From the Fray >>

AWAY FROM THE FRAY

NoLIta’s specialty stores are must-sees for many buyers, but now they can take a breather en route at Park Here, a pop-up park at 201 Mulberry Street. Grab a hammock or a bean bag chair to catch up on work e-mails thanks to the free WiFi. Badminton, chess, checkers, Jenga and card games are also up for grabs. Park Here is prime for picnics (and there is a low-key BYOB policy).

For those in search of a more traditional place to hang out, there is Lilium, the new subterranean bar at the W Hotel in Union Square. Gulla Jonsdottir of G+Design designed the 1,600-square-foot space to look like a cave of wild lilies, and artist Scott Brown created the metalwork with more than 4,000 pounds of steel. Celebrity chef Todd English whipped up the bar menu that includes risotto tater tots and grilled sirloin skewers. And the Blonde Manhattan, a vermouth and orange liqeuer-infused cocktail, is the drink many are having to forget their cares.

“Carsten Höller: Experience” at the New Museum has been such a hit with David Bowie, Christian Bale and other art fans that part of the show has been extended. Visitors now have until Jan. 22 to take a ride on the slide and spin on the carousel he created, all in the name of art.

Uptown at the Frank Lloyd Wright-designed Guggenheim, Maurizio Cattelan’s “All” retrospective is still reeling in the art crowd to see what some critics have described as looking like the contents of a piñata that exploded. The show comes down for good Jan. 22, and the night before 20 prominent artists, philosophers, writers, comedians, filmmakers, actors and musicians will discuss when to stop one thing and start another. That sounds like appropriate advice for a new year.