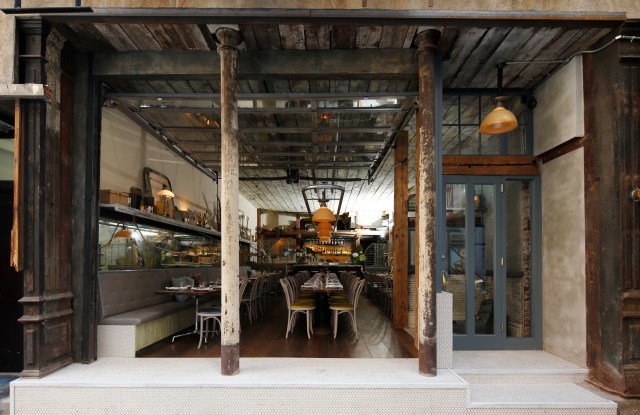 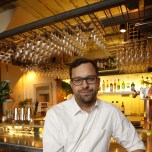 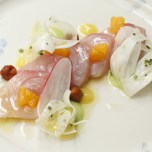 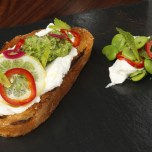 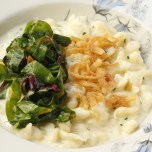 Michelin-starred chef Eduard Frauneder is banking on the revitalization of the Financial District to support his newest restaurant. Opening Monday, Schilling is taking a similar approach as his other restaurants — Austrian cuisine coupled with whimsical, bright design, this time set in a historical location.

“It’s the last existing tenement building in this area. It has its own Facebook page,” Frauneder said of the intimate space, which is located a few blocks from the World Trade Center buildings. His team took great care in restoring the space from its previously run-down state — they raised the ceiling, exposing barn wood and laid free some of the building’s original features, such as steel columns. “I was looking down here, this is so densely built up there’s not a lot of small commercial space,” he remarked of finding the location. “Everything’s either extremely expensive or extremely large.” Andrew Lauren (son of Ralph) was one of the primary investors in the project.

The restaurant features the Austrian staples found at his other restaurants: schnitzel, spätzle and the popular Freud burger. The menu is focused on Southern Austria and weaves in a Mediterranean angle, with a few lighter fish dishes. They are catering to the neighborhood with a direct play toward the lunchtime crowd and after work business. Their cocktail program was crafted by his team at The Third Man, and will offer a new take on classics, as well as German beers and a wine list of mostly Austrian wines.

Layout-wise, the restaurant mirrors Edi & The Wolf in the East Village, his first restaurant, but is better proportioned and a lot brighter. The front of the restaurant features a glass-paneled garage door that opens onto the sidewalk, and a garden in the back is still in the works. “We did not want something too cavey, too, on the dark side,” he noted. “We wanted to make it a really happy space.”

The restaurant is located a few blocks from the World Trade Center towers, and Frauneder is hoping Schilling becomes a go-to for the creative industries that have been filling up the area, as well as the financial institutions nearby. “Do I want this to be a cafeteria for Goldman Sachs? Absolutely,” he remarked, while also calling out the big publishing houses that have moved downtown. The Schilling name is a direct nod to its neighborhood: not only the original Austrian currency, shillings have also been ubiquitous monies worldwide.

The Financial District has seen other big-names move in, with many to follow: Eataly, Todd English, April Bloomfield and Keith McNally all have projects in the works. “It’s all new territory. We will see what’s in for us,” remarked Frauneder. While many restaurants are taking a massive approach, Frauneder has always eyed the smaller, jewel box restaurant setting. “Listen, you know what they say in the restaurant business: small restaurants small problems, big restaurants big problems,” he said.

Frauneder, who grew up in Austria and got his start working in his family’s pastry shop and bakery, originally moved to New York in August of 2001, a few weeks before the September 11 terrorist attacks. “At one point I was thinking, what am I doing here, do I want to be here? This is like despair and destruction,” he recalled. He ended up staying, and has now found himself part of the neighborhood’s revitalization. “Literally 15 years afterward, I’m opening a place down here. Full circle.”