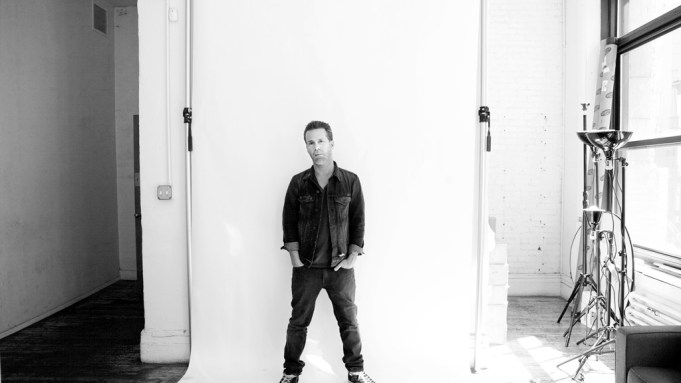 Scott Lipps’ new photo book “Poplipps: Plus One” starts with a foreword from Courtney Love.

“Scott is still pissed that he’s in my cell phone as Scott Lip,” the rocker starts, before recounting the first time she met the fashion fixture. It was 2011 at New York’s Hiro Ballroom. Lipps was hours away from throwing a fashion week fete, toasting the 10-year anniversary of his modeling agency, One Management.

As should be an expectation by now of anyone throwing such a party, something went wrong. Vince Neil, who was scheduled to perform that night, bailed.

“He canceled on the Sunday before Labor Day and the party was that Tuesday. My friend knew Courtney at the time and so he called her and asked her to play…I asked, ‘What do you think the chances are of me getting to play drums with her?’” recalls Lipps, who has been playing drums since he was eight. “He was like, ‘Well she doesn’t really know you but come to sound check during the day and we’ll see.’”

Lipps has played with the former Hole front woman’s touring band ever since. Standing in One’s airy office on Bond Street in Manhattan an afternoon last week, he’s just back from a month of shows.

“I have a new found respect for bands who are on the road for months at a time,” Lipps laughs. “I mean, you basically sleep in a coffin and there’s not always Internet on the bus, which is difficult since, you know, I’m trying to run my company from my laptop.”

Outside his corner office, a cavalcade of employees bang away on their keyboards and long-limbed models sit quietly in the waiting area. A pile of models’ books clutter his desk. These days, Lipps wears many hats. Well, many accessories. Namely, his hands are almost always holding one of the following at any given moment: a model’s book, a Blackberry (essentially another appendage for Lipps), a pair of drumsticks or, as of late, a point-and-shoot camera. Aside from touring with Love and running one of the most successful modeling agencies in the world, Lipps has become something of a photographer.

He started shooting in earnest in 2011 and posting his then-Blackberry shots on his Tumblr, titling it “Popplipps.”

“The initial pictures were taken with my Blackberry, which was like one step away from a drawing,” Lipps says, now grazing on a bowl of chicken noodle soup at a front table of The Smile. He abstains from eating the noodles.

“But it just started taking on a life of its own and growing really fast,” he continues.

“I didn’t start it with the intention of turning into a book,” Lipps says of “Poplipps: Plus One,” a selection of some of his most treasured snaps, released today by PowerHouse Books. “The publisher was aware of the blog and called us so we took a meeting.”

The book itself was culled from not only what made it to the Tumblr but what did not — the entire inventory was 11,000 pictures from five different photo libraries, all of which were on different devices. He had to select 305 for the book.

“The publisher wanted to capture my life,” Lipps says. “So it’s like the office, on Bond Street, traveling, on tour with Courtney, out at parties.”

A generous portion of the photos are model shots: gangly beauties mugging for Lipps in the office or lingering on Bond Street in all their model-off-duty sartorial glory. There’s a bony Aurélie Claudel in a distressed Pink Floyd T-shirt, posted up against a graffitied wall; an iD mag-inspired shot of Carola Remer with her left eye concealed, and rainbow-haired Chloe Nørgaard caught between puffs of her cigarette, a can of Arizona Ice Tea squished in her arm, which became the cover.

Love is a recurring presence in the book. There’s the shot of the two of them, arms slung around a pair of New York cops; another of Love jamming out on stage during one of their concerts, and, the section’s closing shot, of Love sprawled out, laying down in the middle of Bank Street in New York’s West Village.

“We were coming back from dinner one night at the Waverly Inn and she just laid down in the street,” Lipps says matter-of-factly. “She’s a great model because she’s so willing to do whatever.”

“I don’t like approaching people I don’t know,” Lipps says. “Ninety-five percent of the people I shot, it’s somebody I’m directly connected to or it’s one degree of separation. The whole book is about connections in my life so it wouldn’t feel right to include people that I wasn’t connected to in some sense. A lot of it is just capturing the moment, you know?”