Scott Mitchell: The Architectural Designer Looks Back for Book Release

“Scott Mitchell Houses” comes out on May 9.

“You know you’re getting old when you get hired to go back 21 years later,” says the 49-year-old with a chuckle. In the early stages of Mitchell’s career, the two worked to complete the estate in Bridgehampton, N.Y. Coincidently, years later, the property was acquired by friends of Mitchell’s, a couple who hired him to renovate the space. “The painful part is all I see are the little flaws.”

He was flooded with emotion, he continues, of seeing the house again. “Sandy was my best friend.”

Mitchell has dedicated his new design and architecture volume, “Scott Mitchell Houses,” to his longtime pal and renowned producer and talent manager (Cher, Michael Jackson, Barbra Streisand, Mariah Carey) turned real estate developer, who died at the age of 76 in 2017. The book, out May 9, is also dedicated to Mitchell’s son, Max. “He was born nine weeks after we lost Sandy in a really weird, sort of universal timing.”

Gallin and Mitchell met in the mid-Nineties when the designer was starting out. They began to collaborate, and in 1999, Mitchell opened his own studio in Los Angeles.

“Every project has been a teacher,” says Mitchell. His first solo endeavor was a home renovation in Beverly Hills. “What makes a great project is when the interiors, the architecture and the gardens all are in concert and playing the same symphony.”

He’s completed more than 40 at this point, and with each one that comes along, “you get a little bit more creative license to do what you think is the right solution as you build trust with clients.” He’s discreet, doesn’t name names, but clients have included Jeffrey Katzenberg, Larry Ellison, David Geffen, Natalie Massenet and Barbra Streisand.

“Scott Mitchell has found his vocabulary,” writes Calvin Klein in the volume, referring to Mitchell’s Holmby Hills creation in L.A. “He is a structural functionalist. He has designed an exceptional house that is his alone, inside and out. It is magnificent.”

“Calvin is a long-standing friend of mine,” says Mitchell when asked about the designer. “I don’t think there’s anyone in the world I’ve ever come across who has a more impeccable eyeball for detail. Because he’s such a minimalist, everything matters, every texture, every reflectivity, every moment. He’s always been very inspirational to me.”

The book, published by Rizzoli, features eight of his projects in the U.S. and abroad with a foreword written by American architectural critic Paul Goldberger, whom Mitchell admires: “He’s probably the greatest living architectural critic and writer. It’s a real honor for me that he’s taken interest in my work.” 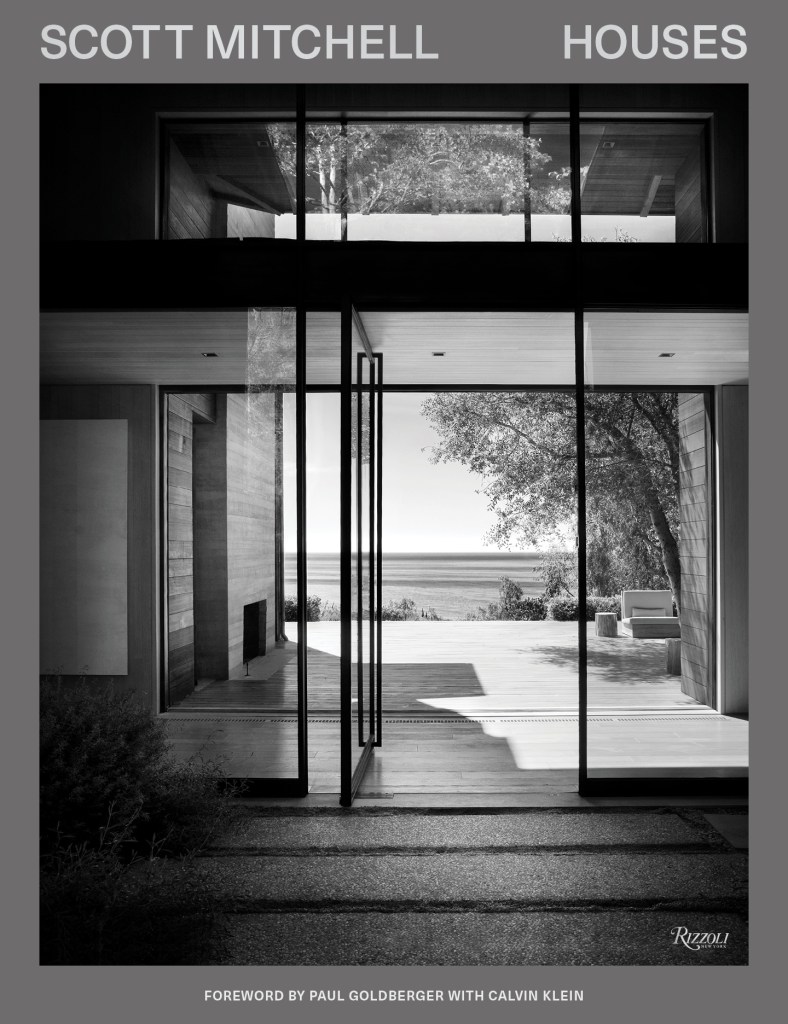 When looking back at his projects, which include restaurants and retail spaces, Mitchell says it’s “communion with nature” that is key for him: “The most important thing that I aspire to do is create buildings that have spaces that appeal to a humanistic psychology and emotional sense of tranquility.” Rudolph Schindler and Louis Kahn have been inspirations, he says, masters of juxtaposing heaviness and delicateness.

Experiences from his childhood, too, have impacted his work. He grew up traveling internationally and spent four-and-a-half years in Japan. His father was a fighter pilot in the U.S. Air Force and, at one point, the assistant military attaché to the U.S. embassy in Amman, Jordan.

“I felt like a man without a country in a way,” he says. But it’s his life in the Middle East, from ages five to eight, that has stayed with him.

“We had picnics by Roman ruins,” he continues. “Some of the ruins somehow really got in my blood visually. There’s something really romantic about the way nature reclaims something that man made thousands of years ago. I find that very poetic and elegant. And I can’t help but see that resonate in some of my work.” 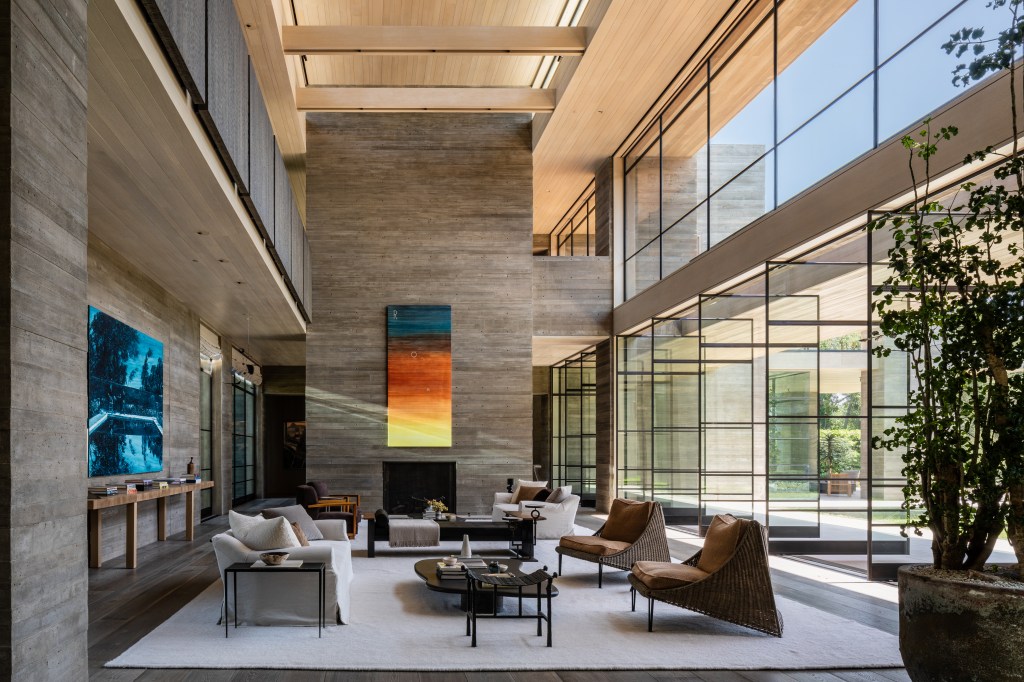 The property at Holmby Hills, an affluent neighborhood in Los Angeles.  Trevor Mein

Though he began majoring in premed at Texas A&M University, he was unhappy with the studies and made the switch after the college of architecture got on his radar. “I lucked out,” he says. “It was a very good fit for me. It jelled so nicely with all my interests that I had always had but never consciously thought about.”

He received a bachelor’s degree in environmental design from the school before moving to New York, then relocating to the West Coast to study at the Southern California Institute of Architecture. Today, he resides in Southern California.

“It’s pretty humbling and sobering to think that nature goes on without us,” he says of the clarity in the atmosphere in the area lately due to less pollution as the public quarantines during the coronavirus pandemic.

Mitchell has found therapy of sorts in tending to his garden. “Every little bush is trimmed within an inch of its life,” he says with a laugh.

He lives in a midcentury modern house, “a cross between Japanese and California ranch,” with his fiancé. And when it comes to the architecture, he’s had “very little to do with” the design. “I’ve lived here for 16 years, and it’s basically unchanged.”

His fantasy, Mitchell says, is to have a farm. It’s no surprise — he finds endless love and inspiration from the natural world and its riches, which is reflected in his work.

The most fulfilling aspect of a project, he says, is its completion. It’s capturing the romance and psychology that he envisions for a space.

“I would advise young architects to be focused on how they can make a meaningful contribution to humanity through the medium of architecture,” he continues. “And by that, I mean, how can you create architecture that uplifts the human condition and creates spaces where people feel inspired to rise to their greatest potential? That’s the real guts of where architecture has value.” 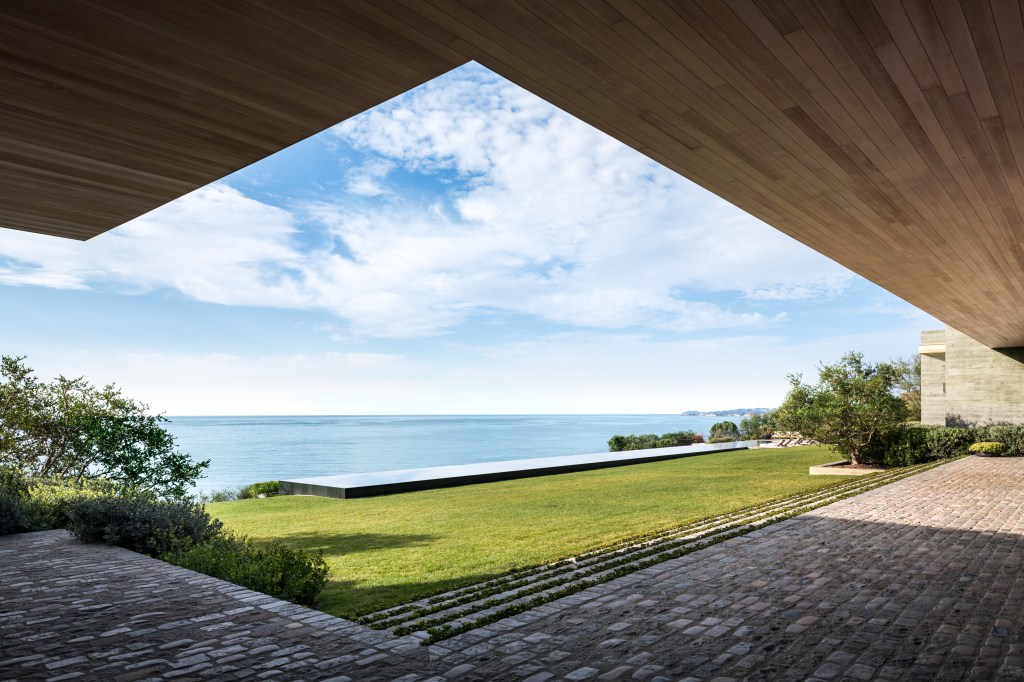