The artist highlights queer representation in visual art and the lost history of LGBTQ violence from the late Nineties in a dual exhibition in New York.

Last month, NYC Gay Pride celebrated the past 50 years of queer history, marking half a century since the Stonewall uprising carved a new movement forward for LBGTQ rights. In a new exhibition of work at the Denny Dimin gallery in Tribeca, Sean Fader takes a closer look at queer history and representation, homing in on the past two decades. Composed of two bodies of work shown together, the exhibition examines how digital technology has impacted the queer narrative. And although quite different in tone, both series (created in tandem) comment on the idea of archive — who has history prioritized, how are they remembered, and by whom?

The show’s collective title, “Thirst/Trap,” is about attention. But while the idea of a “thirst trap” photo is often regarded as a playful social media label, the title (and certainly with the work of the slash) takes a more nuanced approach and injects emotional weight to the context of the work. All of the images in the gallery deserve attention, even — and especially — the ones that are difficult to look at.

In his “Best Lives” series, which is displayed in the gallery’s front space, Fader interrogates society’s expectations of what a gay man should look, and what forces have shaped those ideas. For a previous project, Fader hired freelance photo retouchers from around the world and provided them with a green screen photo of his face and a directive: make him a profile picture that makes him look amazing, and his life look awesome. “They made me this very hetero-normie white bro. And I was really disturbed by it,” says Fader. “I started thinking about the history of photography as one being outlined and created in the imagination of the heterosexual white man.”

He wondered whether that straight male gaze, which has reinforced and magnified queer stereotypes within culture, extended to the more democratic sphere of self-made imagery shared in digital public spaces like Instagram and Facebook. “Are we choosing to reinscribe that same violence on our own bodies, or are we thinking about new ways that we can image ourselves?”

The series counters the narrative that was prevalent in the late Nineties, when Fader himself was coming of age. “All the images of gay men were the straighter you looked, the better,” he says. “We don’t have to do any of that anymore, we can make images for ourselves by ourselves, and eliminate that set of ideologies.”

The artist began reaching out to people on Instagram using geotags and hashtags such as #instagay, asking to meet up and take their portrait. Each session was structured around a discussion of what it means for someone to out themselves through a hashtag, beyond their direct friend circles, and what it means to make a queer image. Fader gave each person the freedom to choose how they wanted to look in the photographs, and what they wanted to say to the world through their image. Afterward, he lets his subjects choose which photographs he uses, if any, by posting the images to their personal Instagram accounts.

“If you could go back in time and make an image that you think would be helpful for you when you were 13 years old, what does the image look like now that you’ve found yourself? Do that for 13-year-olds now, show them who you can be,” says Fader. 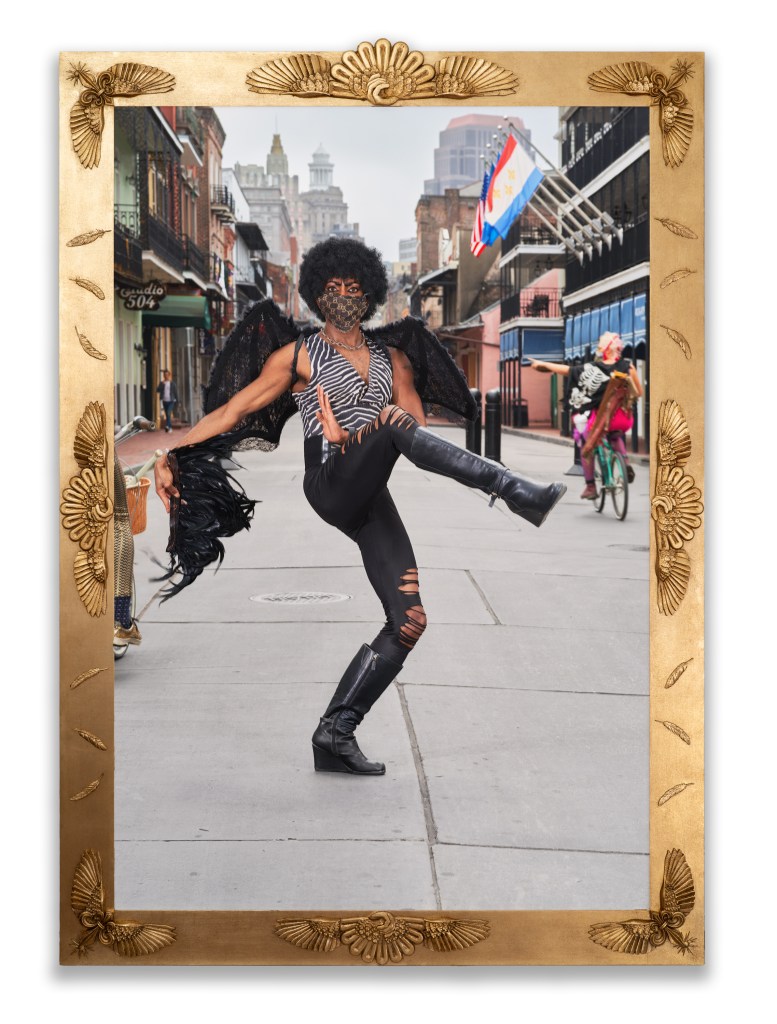 The portraits are showcased in ornate custom gold frames, a riff on classical paintings and the history of images. As much as the oversize images serve to celebrate the works, Fader also imagined them as a commentary on the broader canon of art history. Why are queer images missing from the historic works displayed in the grandiose frames of art institutions?

A similar idea drives his digital media work “Insufficient Memory,” projected in the gallery’s back space, which explores how the digitization process has impacted queer history, and specifically the awareness of queer hate crimes committed at the end of the Millennium.

“The ‘Best Lives’ portraits are these big, celebratory, proud — maybe tacky, even — bright and colorful organic things that felt ethereal almost. I jokingly refer to them sometimes as anthem images,” he says. “And then the other photographs and the Google Earth with all these stories on it [‘Insufficient Memory’] is this cruel anchor that weights it down.”

A few years ago, Fader, a professor of photography, came across a Sony Mavica digital camera in his office at Tulane University. The early digital camera triggered memories of his ex-husband’s mother, “a PFLAG Internet junkie from the Deep South,” circa 1999. He began reflecting on that particularly moment in time, which he lived as a young adult. Following the 1998 murder of University of Wyoming student Matthew Shepard. President Clinton’s State of the Union Address in 1999 introduced the idea of including the LGBTQ community in the Hate Crimes Prevention Act, which was then debated in Congress.

“Meanwhile, there’s all of these people who are being murdered and quite frankly, oftentimes not even investigated,” says Fader. “The optics weren’t the promising attractive young white boy, the optics were very different in many of those situations and therefore forgotten.”

Fader created a new archive of some of those forgotten stories through intensive and investigative research using local newspaper archives and archives compiled by local activists. He created a Google Map, which serves as the project’s container, where he plotted and documented hate crimes against the queer community, many of which have been forgotten, between 1999 and 2000. He traveled to the locations of 80 crimes during that period, and took a picture using the Sony Mavica digital camera.

The aggregated information counters the reality of the pre-Y2K Internet, when many people’s source of information was dependent on local news coverage, and also assumptions about the modern Internet age as a complete archive of history. Fader draws attention to how the digitization process has shaped history, and how that process can work to erase queer history.

“Who has the power, the education, the privilege to digitize archives, to digitize information from the past?” asks Fader. “Because those are the people whose histories are going to be seen and heard.” 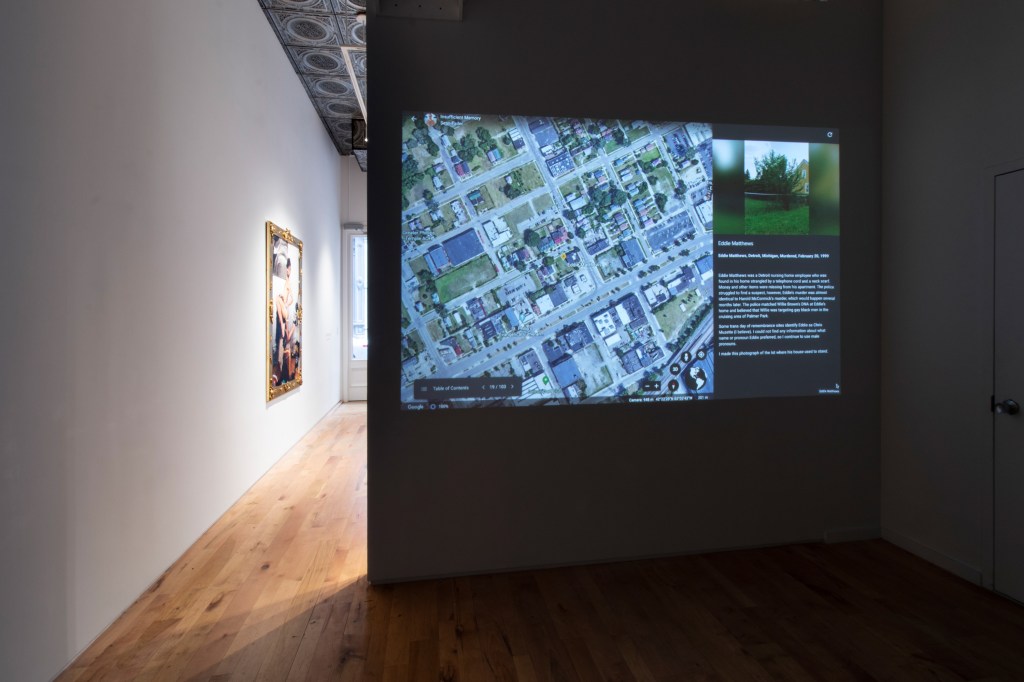 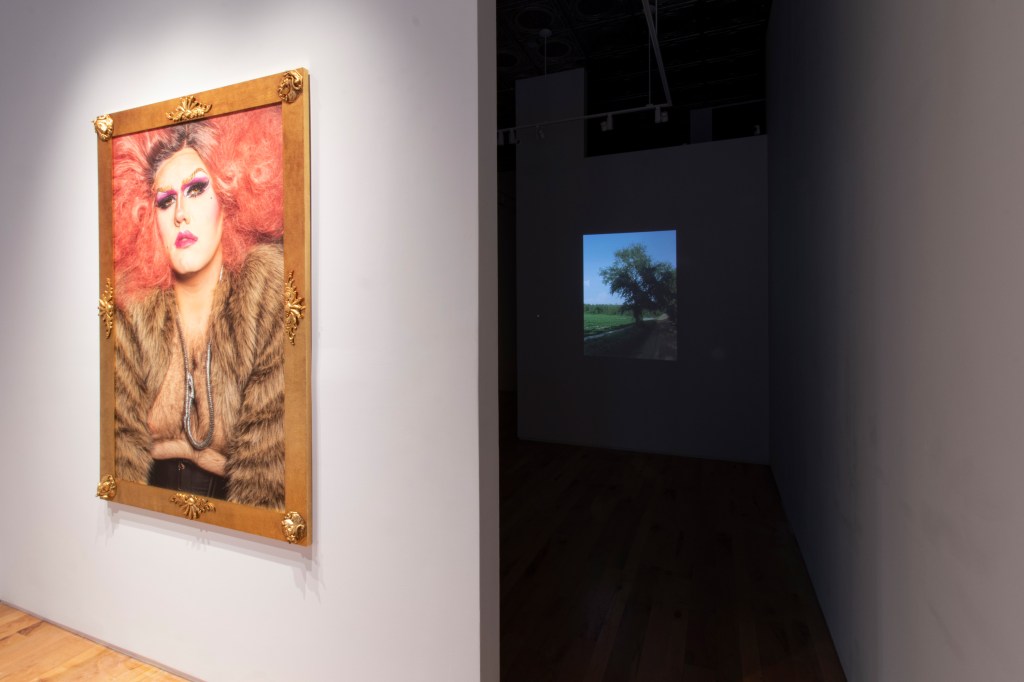