Serena and Venus Williams brought out their best tennis whites to Wimbledon 2016. 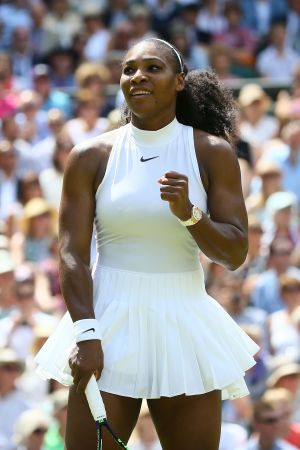 When it comes to tennis fashion, Wimbledon might not allow for many surprises, given the strict all-white dress code. However the most well-recognized of the competitors, Serena and Venus Williams, have drawn headlines for their ensembles at this year’s competition, taking place at the All England Lawn Tennis Club in London, from June 27 through July 10.

As to be expected, Venus has been outfitted in her label, EleVen. The 36 year-old founded the line in 2007 with the now-defunct retailer Steve & Barry’s. Williams has an associates degree in fashion design from the Art Institute of Fort Lauderdale. The line was revived in 2012.

Serena chose a Nike dress with a more unusual halter turtleneck look and a flared, pleated shirt. The Nike look hasn’t been a fan with everyone, however. Several Twitter users have critiqued the athlete’s top for being too tight and revealing, following her quarter-final match on Wednesday against Anastasia Pavlyuchenkovaon. “Serena Williams nipples are literally in HD like can u put them away I’m trying to watch the match,” one viewer tweeted. “I wouldn’t usually comment on another woman’s body, but could someone give Serena Williams something to cover her nipples…very distracting,” another posted. Professional golfer Georgie Bingham seemed to feel that Serena’s lack of proper support took away from her victory, writing, “my point about Serena Williams is she just took that girl to pieces & everyone’s talking about her nipples. A proper bra isn’t hard to find.”

Such body-shaming did not sit well with Serena’s supporters, as body-shaming rarely proves to be well-received on the internet. In response to Bingham, one man wrote “typical..Serena dismantles her opponent but everyone including you wants to talk about her nipples. Absolute joke!” Another user posted “Andy Murray’s nipples were visible under his shirt yesterday. Where’s the uproar about that?” The moment proved to be fuel for the “#freethenipple” campaign, with one user tweeting “yes, all humans have nipples, get over it! Now how about that serve…! #freethenipple.”