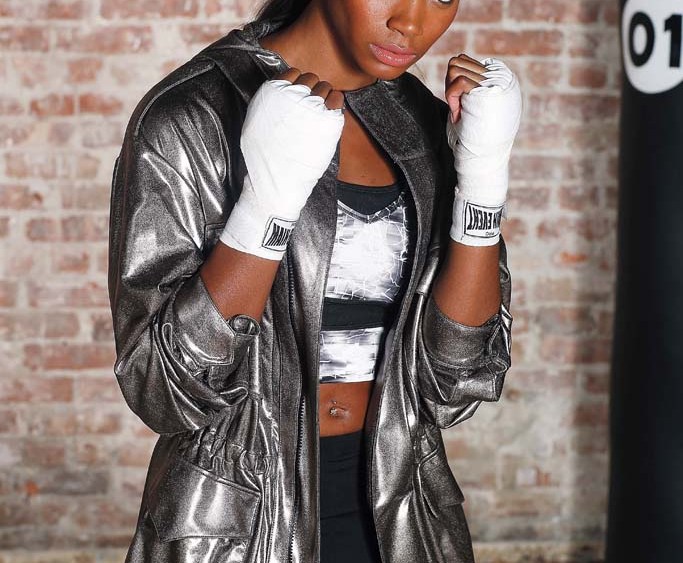 Follow the fashion crowd on social media, and you’ll likely have noticed a peculiar phenomenon: The waif is out; the gym rat is in. Pretty young things who once posted selfies around the clock are shamelessly showing off their exercise routines — and no workout is more in vogue than boxing.

When Adriana Lima needed a post-baby slim-down before the Victoria’s Secret fashion show, she put up her dukes. Gigi Hadid attributes her sculpted arms to the sport. Designers are picking up the banner, too: Alexander Wang designed boxing gloves for his H&M collaboration last fall, as did Karl Lagerfeld for Chanel — ringside, Cara Delevingne and Binx Walton traded gloves for lace-up boots and quilted bags in the ad campaign. And as part of Louis Vuitton’s Celebrating Monogram project, Lagerfeld created a full set of boxing accessories. Retail price: $175,000.

Just in time to cash in on the trend comes Shadowbox, a boxing studio catering to women that’s opening next month in New York’s Flatiron District.

Whitewashed and spalike, it’s more beauty salon than gym, with C.O. Bigelow bath and body products available in the locker rooms. “We’re going to try to bridge the gap between what’s great about the sport traditionally and bring it into the new century for women who want to be able to take a shower and blow-dry their hair and go to work afterward,” said Daniel Glazer, the club’s founder. (Incidentally, in the West Village, there’s also Velvet Gloves, “New York’s only primarily gay boxing club.”) But while Shadowbox may be tailored to women, it should not be confused for boxing lite.

The signature group class at Shadowbox is broken into three sections: Shadowboxing with and without weights, heavy bag work with guided punch combinations and core work and body weight exercises followed by stretching. The master instructor is Raymond Montalvo, a former Olympic boxer from Puerto Rico; many of the other teachers are Wilhelmina models, like Brittany Clybourn (pictured here), a fixture in fitness magazines.

It’s not hard to see why what was once thought of as the ultimate Alpha male sport has gained traction with women — workouts don’t lead to bulking up, but instead lengthening and toning.

“When you see a boxer’s body, it’s lean, quick, agile — in the best shape of their life,” said Clybourn, who, like other models, adapts elements of the sport into her workout, rather than, say, going 12 rounds in the ring.

“A lot of models are picking it up because it is a fun way to exercise and it works out every muscle,” Lima said. “I always see results.”

Glazer, a 31-year-old former derivatives trader who’s been boxing for five years, decided to open Shadowbox because the only clubs he saw were old-school sweaty gyms that were geared more toward training fighters than Average Joes who wanted to reap the physical benefits of the sport.

“Ironically, the high level of fitness that’s going on there is really hard to duplicate. It’s like they had this great secret that they’ve been guarding,” he said. “But now the secret is definitely out.”