If You Can’t Buy a Kaws, Make One Yourself With ‘Open Studio’

For art curator Sharon Coplan Hurowitz, Jasper Johns’ 1971 “Target” presented an existential dilemma. Hurowitz has lived with a print of Johns’ DIY art invitation — an outline of a target, with three watercolors and paintbrush affixed below — for many years, but has resisted the urge to pry the paintbrush off, color in the print, and sign her name on the blank line next to Johns’ own signature.

“I’ve been wrestling with this in my house forever, wanting to use it, and I never would allow myself,” says Hurowitz of the piece.

The paradox of an art project that’s too precious to complete inspired Hurowitz to dream up a book of approachable DIY art projects. She’s hoping that readers will take an unbridled approach to “Open Studio: Do-It-Yourself Art Projects by Contemporary Artists,” which she co-wrote with Amanda Benchley. “I’m hoping that the book really gets torn and beaten up and used, and that people won’t treat it in a precious way,” says Hurowitz.

The curator is dressed in Chanel on a recent fall afternoon, Zooming in from her home office in Manhattan. Earlier in the day, she tuned in to watch the brand’s latest collection streaming from Paris; Hurowitz has had the honor of attending many of the house’s shows throughout the years, but there are two that she regrets missing: the supermarket show, and the one set against a Chanel-created art gallery in 2013. After that gallery show, which questioned definitions of art, the brand reached out to Hurowitz for advice on what to do with their set design. “Chanel wasn’t sure what to do with it afterwards, because they felt it was art,” she says.

Readers completing the projects within “Open Studio” are likely to feel similarly. The spirit of collaboration is an underlying theme throughout the book; the reader becomes a late collaborator with each artist.

“At the end of the day we know we can’t be these artists — but what we can do is bring in our own touch, our own creativity and our own experience, and each of these projects really allow for that,” says Hurowitz. 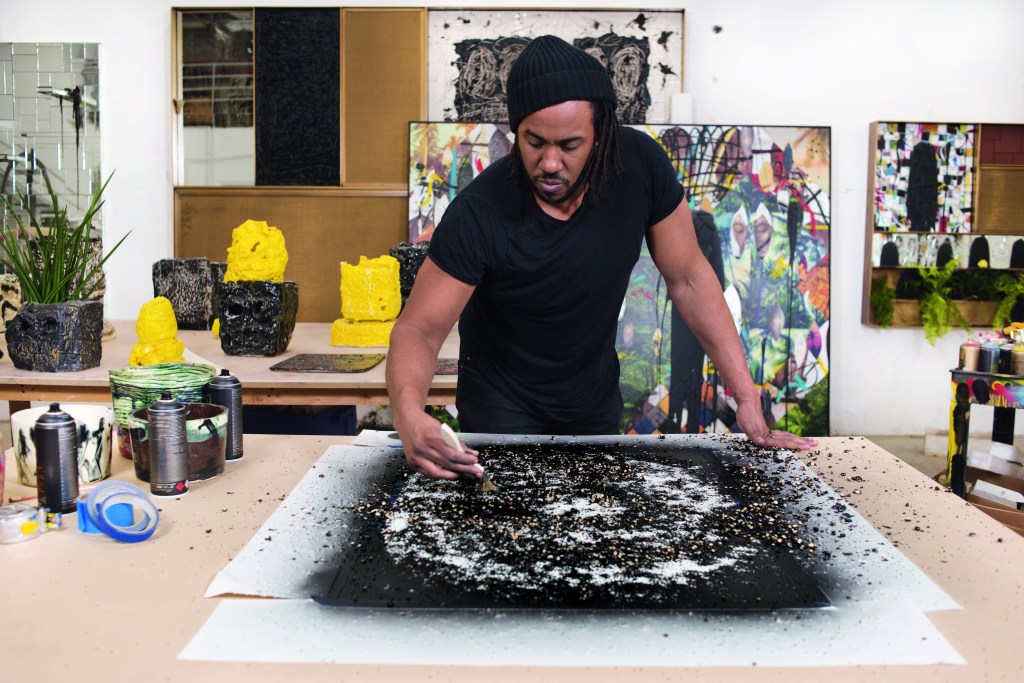 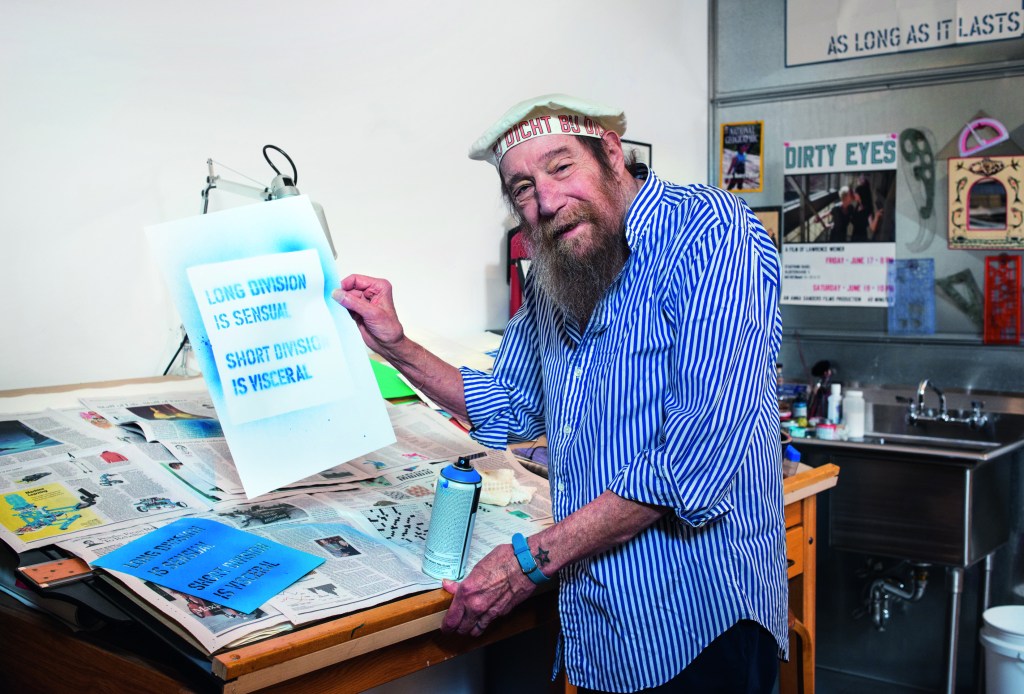 Lawrence Weiner in his West Village studio in Manhattan. 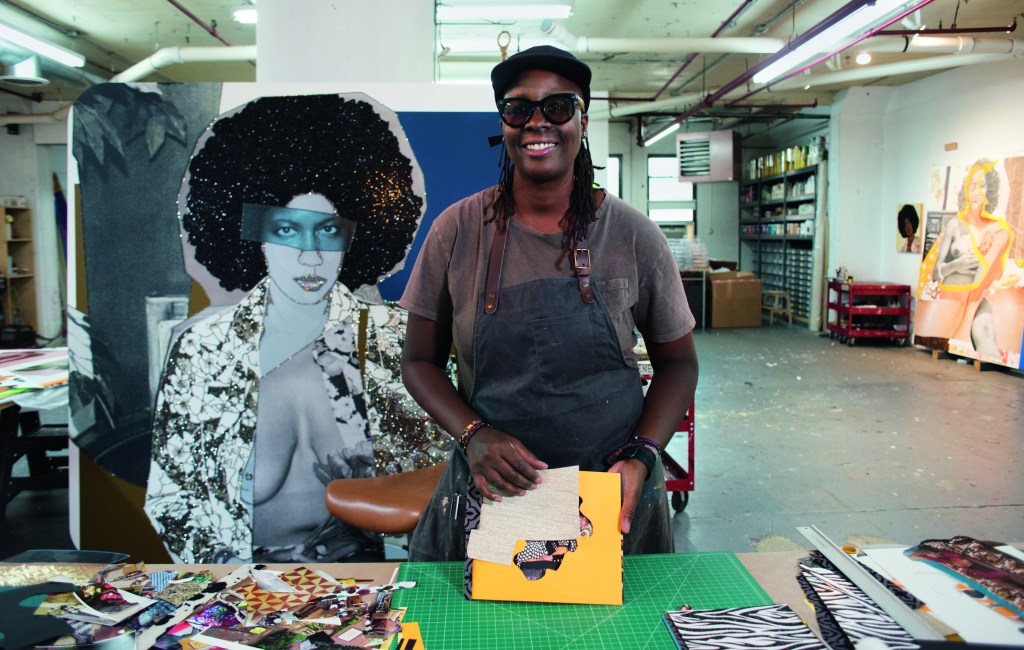 Hurowitz is a print specialist, and that approach to accessibility within art underpins the philosophy reflected throughout “Open Studio.” “I wanted artists who not only resonated but who also have a very strong auction market, are market leaders, because I felt like those were the ones who were least accessible to people, and the most known,” Hurowitz says. “Who can afford a Kaws? But you can get a real Kaws in here,” she adds, flipping through the book.

What she means is that a Kaws piece is accessible to those willing to put in the work. Each artist provided a recipe for an art project in line with their individual art practice. For Kaws, it was providing a Mylar tear-out which readers can project and trace; Lawrence Weiner provided a stencil in line with his phrase-based text works. The book is packed with tear-out art projects from artists like Rachel Feinstein and William Wegman, but others include directions for more ephemeral projects, such as Marina Abramović’s meditative project, which involves sorting through a bowl of uncooked lentils and rice. It’s a metaphor for life.

Hurowitz, who completed most of the projects in the book herself over the summer, found the Rashid Johnson one particularly satisfying — due to an element of surprise and chance — and she also enjoyed the minimalism of Sarah Sze’s, rooted in an exploration of balance and counterbalance. 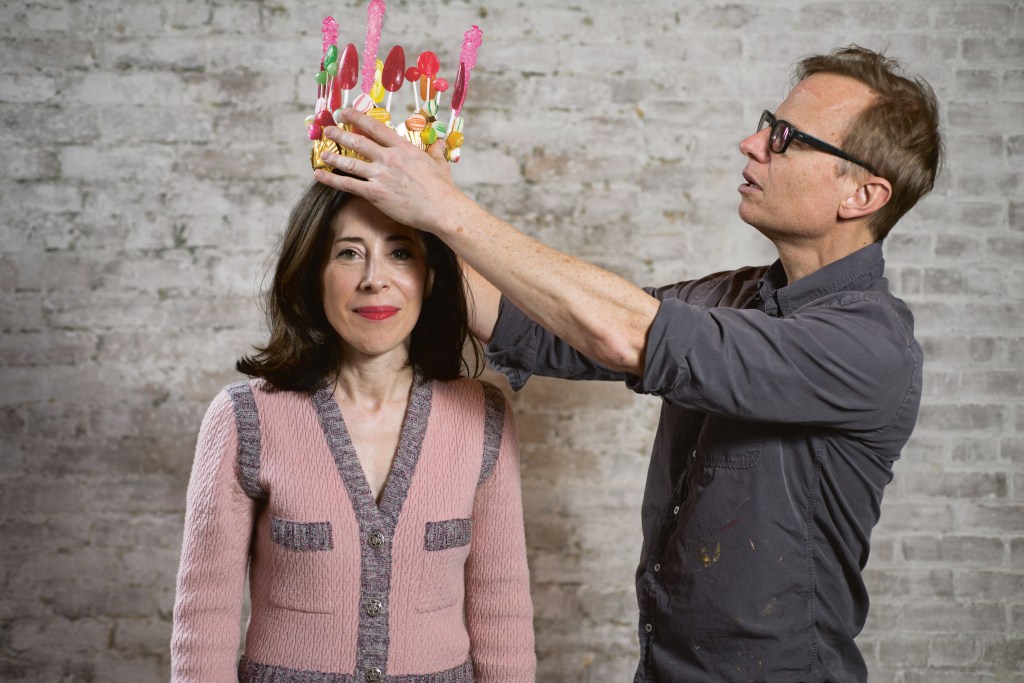 Sharon Coplan Hurowitz and Will Cotton.  Casey Kelbaugh/Courtesy of Will Cotton 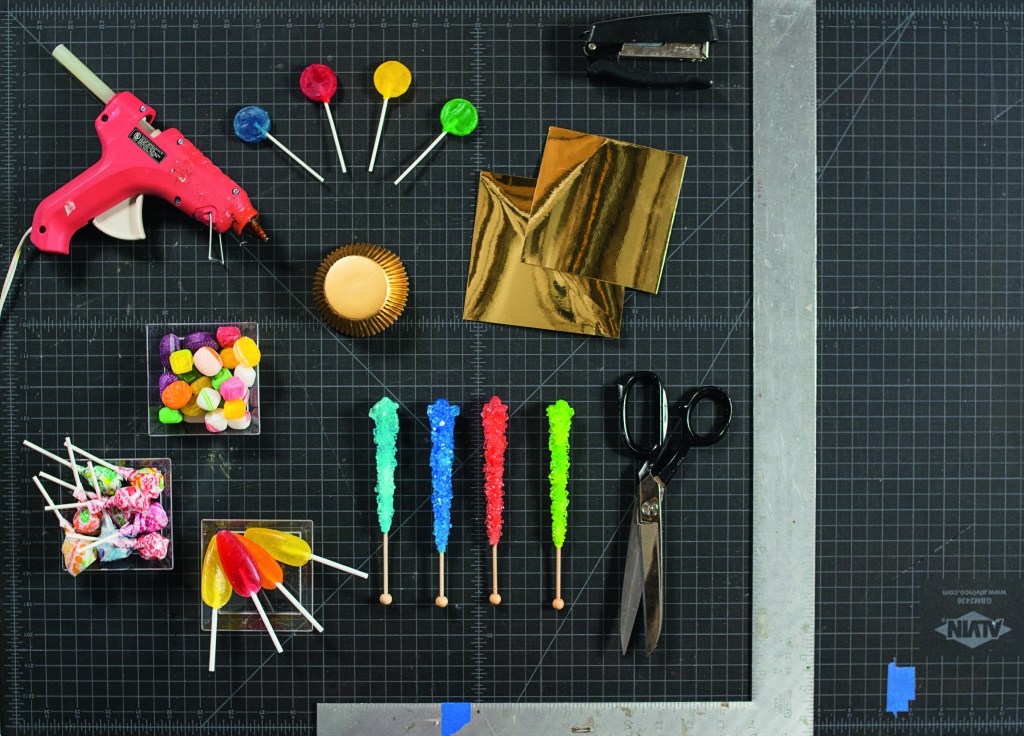 Hurowitz notes that many of the artists included in the book — the majority of whom she had existing relationships with — were excited about the prospect of conversing with a broad audience outside of gallery-goers or the rarefied art collecting crowd. It’s art for the masses. “[All the artists in the book] are market leaders, and they knew they were going to open the doors to people who otherwise don’t have access to their work,” she says.

Many of the artists included also have fashion ties — Mickalene Thomas and Kaws have each linked with Dior, Thomas Demand designed Prada’s cherry blossom store windows earlier this spring, Alex Israel has collaborated with Louis Vuitton, and Rachel Feinstein has created a show set design for Marc Jacobs — in fact, her project in the book is a miniature pop-out construction of that same Marc Jacobs set. 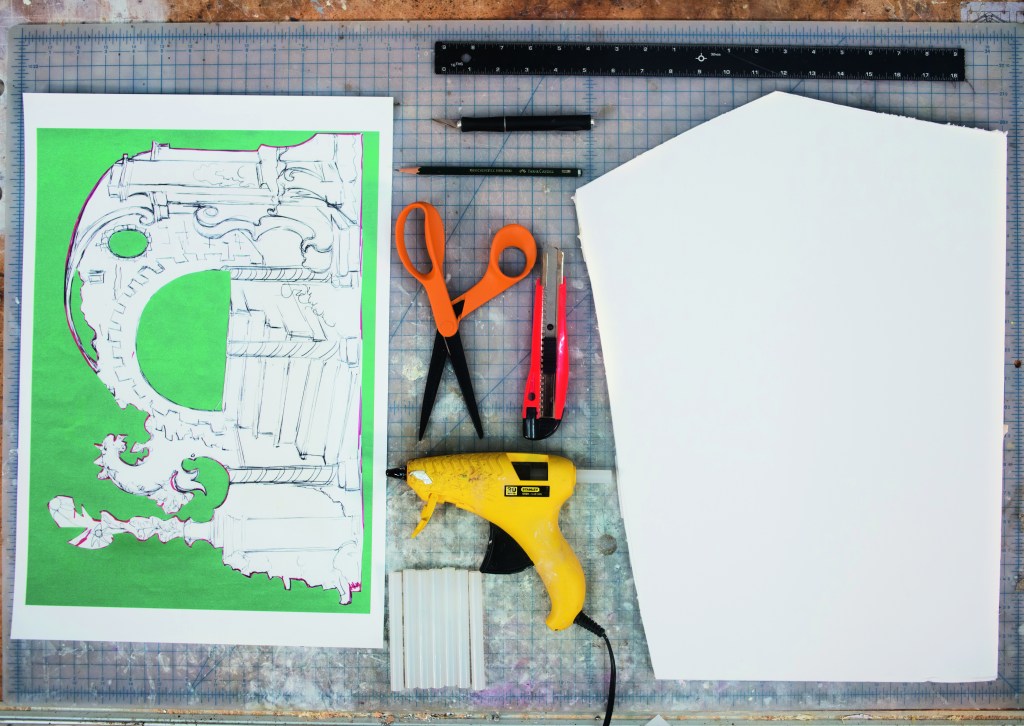 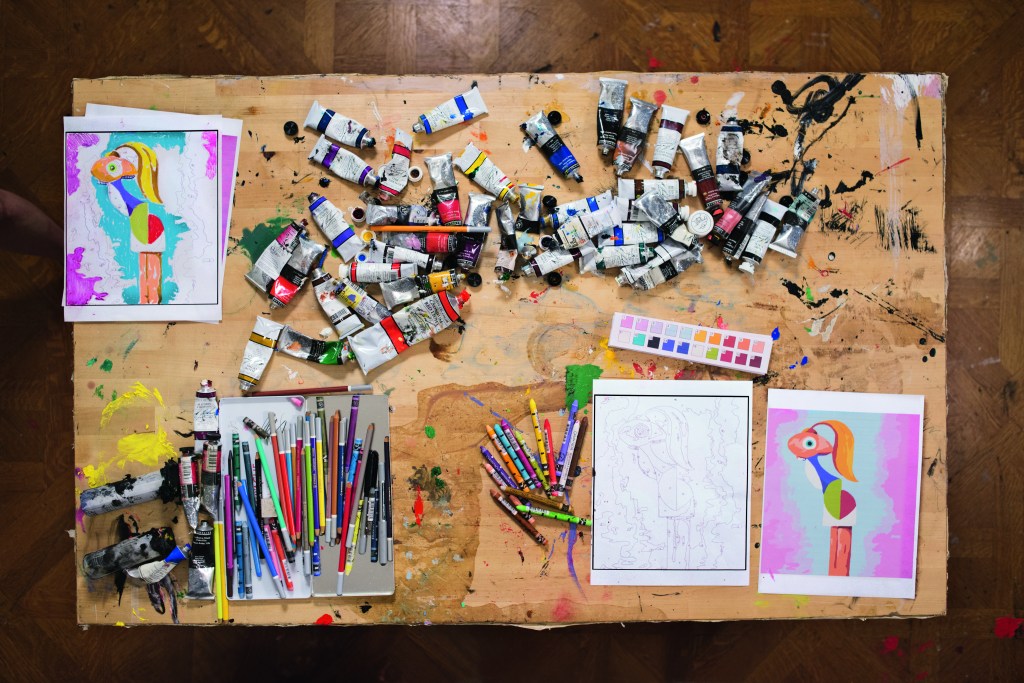 Each chapter opens with photographs of the artist’s studio as well as an essay about their creative process and inspirations. “This book is learning how to make things, why they make things, and what that process feels like,” says Hurowitz.

A large part of that is confronting the question of when something is finished. “And in fact, there’s a work that really engages that issue in this book, which is the George Condo project,” she adds. “He left deliberately part of it unfinished.”

As for Hurowitz, the question of a project being finished is often tied to deadlines. “There’s a moment when you’re on a high and it’s right and you stop,” she says. “I know something’s done when it’s that moment where if you put one more thing on it, it’s too much… I felt that way with this book.”

Although “Open Space” is finished, Hurowitz hasn’t ruled out the possibility of another edition; in the meantime, she has a few other projects still in the works, including a book on Bruce Nauman and a portfolio of prints to celebrate the Met Museum’s 150th anniversary. Hurowitz describes the resulting collection of 11 prints, selected in conversation with curators from each of the museum’s departments, as a “museum in a box.” 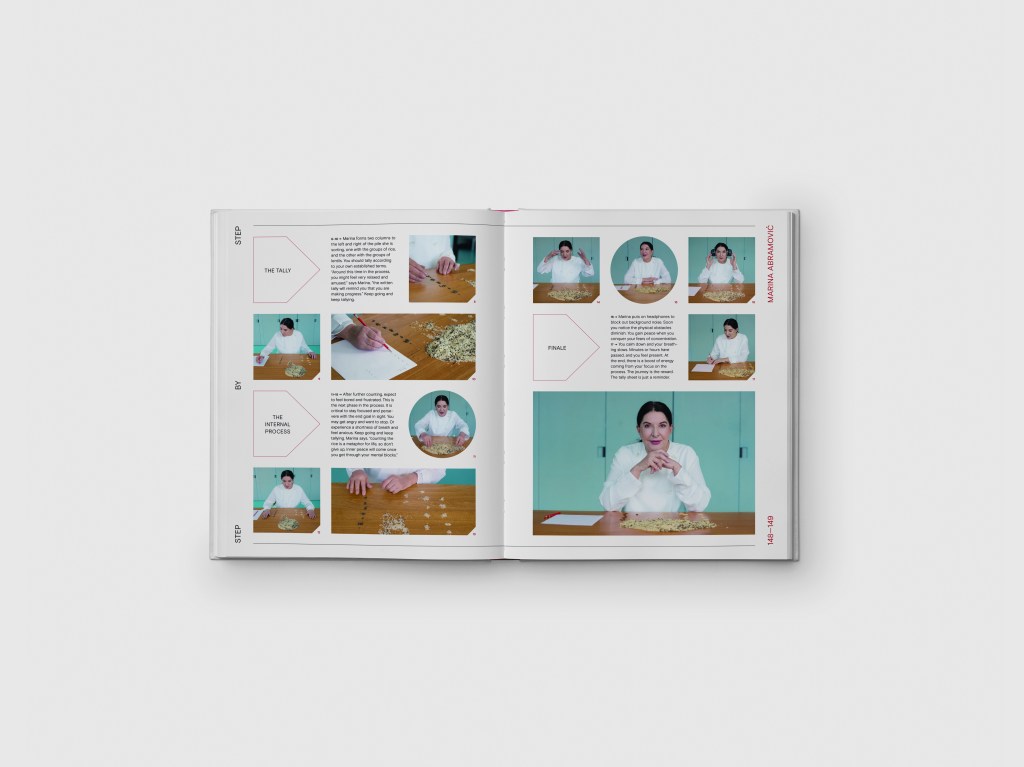 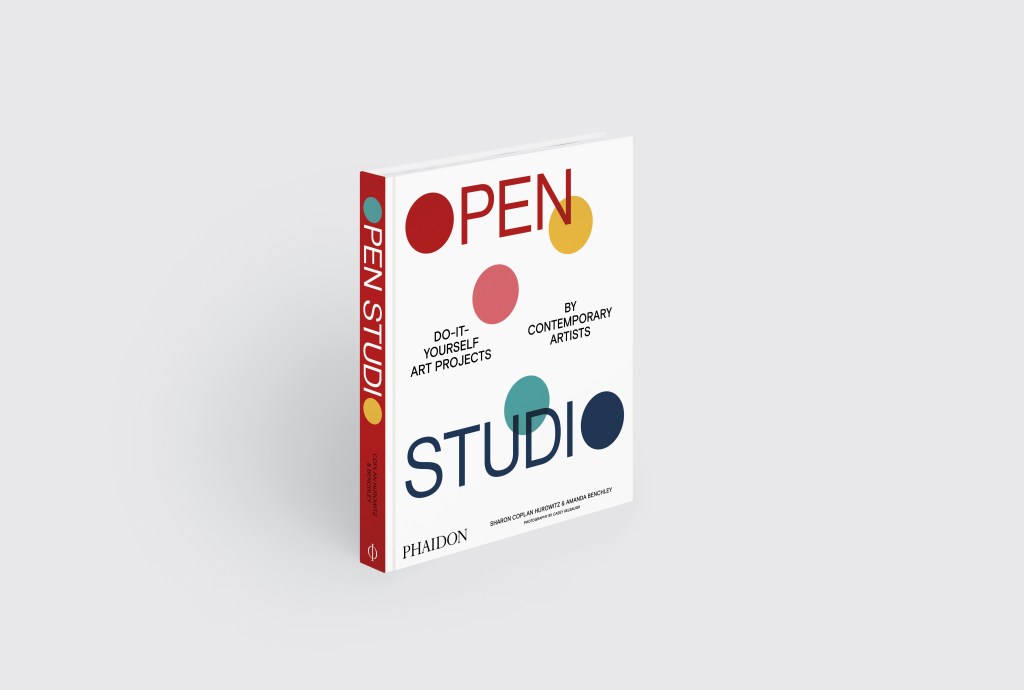