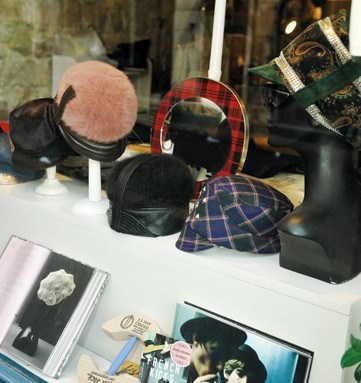 PARIS’ 20TH ARRONDISSEMENT
The 20th arrondissement in Paris is famous for the Père-Lachaise cemetery, the last resting place for some of the most famous names in literature, art, philosophy and music, from Marcel Proust and Oscar Wilde to Maria Callas and Jim Morrison.

But a stone’s throw from this leafy haven of tranquility hums one of the most alive and vibrant areas of Paris. In the Quartier Saint Blaise, there stand the remains of the 13th-century parish church, sentinel over what has become an area reflecting the diversity of people, architecture and the arts in this cosmopolitan city.

Located in the north of Paris, the hilly area stretches from Belleville to Ménilmontant, bordering the 18th arrondissement (Montmartre) and the 19th, known for its sprawling park, the Buttes Chaumont. However, unlike Montmartre, there is no tripping over hordes of tourists to go to one of the neighborhood’s eclectic mix of bars or restaurants, or to take in one of the many concerts, thanks to a vibrant music scene and a concentration of great venues.

The artiness and youth of the area have been reunited in the recent opening of a cultural center called 104 (104 Rue d’Aubervilliers/5 Rue Curial), a renovated warehouse building that provides accommodation for 200 artists. From art fairs, exhibitions and fashion shows (Martin Margiela and Alexander McQueen were among the first), the 104 offers a unique cultural experience. Once considered to be an annex of Paris that welcomed an immigrant population, and a safe haven during the revolution, the 20th today has a distinct allure with its cobbled streets and an abundance of verdure.

There are a number of charming restaurants that offer unpretentious meals at reasonable prices. A perfect example is Les 3 Chapeaux at 48 Rue des Cascades, a Moroccan eatery where couscous and tagine are on the menu and the entertainment is a jaunty mix of Arabic and French music. La Bellevilloise (19-21 Rue Boyer) and La Maroquinerie (23 Rue Boyer) are as popular with the locals as well as those from further afield. Sandwiched next to each other, La Maroquinerie has a constant flow of well-known acts such as The Rascals and Merlot. If hunger hits, pop next door and dine at La Bellevilloise, which on Saturdays has an organic menu to accompany the yoga class that takes place. Sunday brunch is also a must, and features a traditional French menu. A visit to the Cafe Animé La Mer à Boire (1/3 Rue des Envierges) is an enriching experience where customers can enjoy the ever-changing exhibition of illustrators’ works that hang on the walls. Recent exhibitions include the sartorial cartoons from the French paper Charlie Hebdo, and in January a collective exhibition of illustrators is scheduled, entitled “Bye Bye Bush!” Or marvel at the incomparable and spectacular view of the rooftops of Paris from the terrace, which overlooks the Parc de Belleville from which, if lucky, you may be treated to a stunning sunset.

For the fashion-forward there are boutiques and artisanal designers aplenty. Milliner Estelle Ramousse (67 Rue de la Mare) works from her atelier, making hats for the theaters and opera houses in France as well as for individual clients. A little further down the winding road, on the sloping Rue de Menilmontant, is the new boutique Vintage 77 by Dje (77 Rue de Menilmontant), which mixes designer labels such as Chanel and Courrèges with dresses from the Thirties and pieces by little-known French and Italian brands. Designer Stephanie Coudert (25-27 Rue des Envierges) also has set up her atelier in the heart of this district. And hidden away at 32 Rue de la Mare is a cobbler’s workshop called Les Chaussures Germaines, where Madonna is said to have shoes custom made.

A short distance away is the recently opened Philippe Starck hotel, Mama Shelter (109 Rue de Bagnolet). Formerly a parking garage, it has been transformed into a luxurious but affordable inn boasting various eateries and terraces, where those who still smoke can enjoy their drinks and cigarettes sheltered from the elements. The contemporary design of the hotel is very open and airy, and a monument to modern living. More affordable still is Ermitage (42 bis Rue de l’Ermitage). Although only a one-star hotel, it boasts a spectacular view of the major sites of Paris, such as the Eiffel Tower or the Sacré Coeur—something that not even a deluxe hotel will give you. And breakfast is a snip at a mere 5 euros.
—Natasha Montrose

NEXT: Shopping Blocks in Tokyo >>

TOKYO’S DAIKANYAMA
Just one subway stop away from Shibuya’s high-rise department stores and neon-lit landscapes, Daikanyama offers visitors a quieter, more laidback side of Tokyo. This hilly neighborhood has a vaguely European feel to it and it’s brimming with a unique mix of stores and cafes. Loveless (20-23 Daikanyama) is one of Tokyo’s hottest multibrand stores, and its flagship in Aoyama attracts scores of shoppers passing through the city, from fashion-conscious tourists to style-savvy celebs such as Lindsay Lohan. A few months ago, the famed retailer opened its second outpost in Daikanyama. This smaller store stocks a broad assortment of its private label apparel and accessories as well as pieces from brands like Tequila Soda, Alice + Olivia, Carlos Miele and Amsterdam-based label Pauw.

The same shopping center houses the newly opened WR (20-23 Daikanyama), a store focusing on stylish items for young working women, such as knit dresses and leather capelet jackets. Yui Tsukida, who worked at Maria Luisa in Paris for six years, oversees the creative direction of the store.

Né-Net (20-23 Daikanyama) is just around the corner. This label, designed by Kazuaki Takashima, is always a highlight of Japan Fashion Week. It’s known for its quirky streetwise designs, which include coats with glove-shaped pockets and sweatshirts with bunny ears coming out of the hoods.

Just down the street, nakEd bunch (19-11 Daikanyama) offers up more relaxed notions of Tokyo style with fresh takes on sportswear, including flared fleece parkas and leggings with images of deer stenciled on them. The line’s designer is illustrator Ed Tsuwaki, who has worked for Italian Vogue.

Shoppers also should swing by CA4LA (17-5 Daikanyama), pronounced “kashira,” which means head in Japanese, to check out a vast range of hats, from a knitted cap with furry trimmings to a wide-brimmed derby hat. T-shirt fanatics should head to specialty retailer Beams’ recently opened concept store Mangart (19-6 Sarugaku). Just like its flagship in Harajuku, this shop features a conveyor of hanging T-shirts; however, all the ones sold here bear the designs of a manga or comic book artist.
—Amanda Kaiser

NEXT: Shopping Blocks in London >>

LONDON’S NEW WEST END
With its pastel pink mews houses, quaint markets and cobbled streets, Notting Hill attracts throngs of London tourists. But there’s more to Notting Hill than the travel guides’ trail and movie locations. A clutch of edgy retailers have lighted on the fringes of the area—to the north and east of Portobello Road—to set up shop.

All the vintage furniture that Merchant uses as fixtures and fittings, from Victorian wooden writing desks to Fifties Italian lamps, is also for sale. “[Notting Hill] had changed so much that anyone creative was either priced out or fed up with small dogs and huge sunglasses,” says Merchant, referring to the area’s chi-chi residents. Merchant says she prefers the eclectic mix that her store on Kilburn Lane—sandwiched between a launderette, post office and cafes—attracts. “One minute a black cab pulls up and it’s someone from a fashion house or a celebrity looking for something to wear, and then there’s the lady from [a local housing project] who pays 20 quid [or $29 at current exchange] a week off a Thirties gown she’s fallen in love with.”

Andrew Ibi, a fashion designer turned self-styled “shopkeeper,” opened his clothing boutique, The Convenience Store (1a Hazelwood Tower), in a former shoe-repair store in nearby Golborne Gardens, with similar intentions of embracing the neighborhood. “It was isolated, tucked away and local, but it had a community spirit,” says Ibi, sitting in front of one of the store’s huge windows, which looks out onto the Trellick Tower, a monolithic housing project designed by Ernö Goldfinger in the Sixties. The 450-square-foot store is also across the road from Rellik, the famed London vintage shop where Kate Moss bought her Vivienne Westwood pirate boots. Ibi’s store carries a small selection of pieces by designers including Rick Owens, Veronique Branquinho, Ann-Sofie Back and Clare Tough, displayed on spare wire racks against the store’s smooth gray concretelike walls. Ibi says he aims to let his customers know the story behind each of the designers rather than merchandising the store by trends. “I wanted to create a whole world for [the clothes] to sit in. It’s a mini fight back against the trend to shop in department stores, where the selection isn’t that interesting,” Ibi says, adding that the shop’s location means that there aren’t the same rental pressures as there would be in a central London store, so he can “support new designers.”

Sasha Bezovski, one of the owners of Kokon To Zai, a designer boutique with stores in Soho and Paris, says the company fell in love with “the eclectic vibe and faded grandeur” of its latest store at 84 Golborne Road, which carries its own label collection along with brands including Vivienne Westwood, Bernhard Willhelm and Raf Simons. Bezovski calls the area “a very nurturing spot when it comes to selling boutique brands that are oneoff…and offering the customer something different.” The store is housed in a former butcher’s shop, with original tiled walls, mosaic tiles on the floors and a changing room covered entirely with mirrors. And, while the three stores are all designed to appeal to a niche fashion audience, Ibi believes that, as the difficult economy forces shoppers to consider their purchases, consumers will be drawn to more “special” shopping experiences away from London’s thoroughfares. “People will buy things they love that are really special, but maybe not so many of them,” says Ibi. “It can be a good time for creativity.”
—Nina Jones