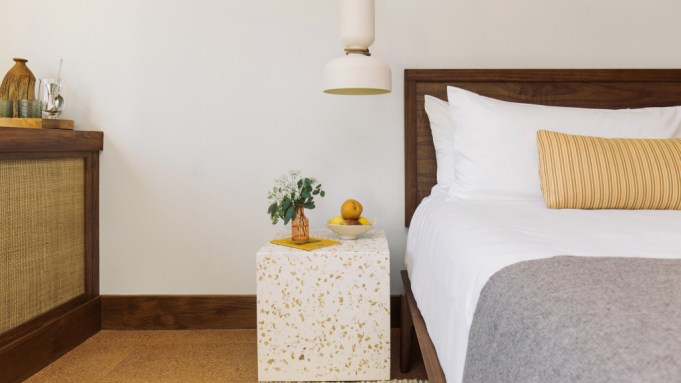 What was once an inconspicuous motel built in the late Eighties, turned month-to-month housing complex, Sunshine City Apartments, is now Silver Lake Pool & Inn. The hotel was unveiled today in the heart of Sunset Junction — the intersection of Sunset and Santa Monica Boulevard — in Los Angeles.

“The building itself was not very majestic-looking,” said Avi Brosh of Palisociety, who partnered with John Chaffetz, cofounder of development firm Timberlane Partners, for the project. Chaffetz is a Silver Lake resident and behind neighboring restaurant Botanica. “It came with a little house on the corner. The guys [from Timberlane Partners] that approached me said, ‘There’s a way we can take this property and convert it into a hotel, and we’re thinking about taking the little house, tearing it down and building a restaurant and pool area.’ The reality is that if you’re in the hotel business and you want somebody who has experience in these smaller, more boutique style properties, there’s really just a couple people that you can call. We got that call.”

It’s a 54-room property with accommodations ranging from 250 square feet to 1,440 square feet in size. And alongside the pool is Marco Polo, a restaurant opening on Nov. 15 that will offer coastal Italian-inspired cuisine by chef Casey Lane and a cocktail menu that includes $9 aperol spritz. There’ll be antipasti, salads, charcuterie and seafood boards. Dinner will have options like linguine with clams and nettle pasta with walnuts and ricotta salata, while brunch will offer poached eggs with prosciutto and Hollandaise sauce, ricotta pancakes and vegetable-filled frittata.

“It’s meant to appeal to a broad range of customers,” said Brosh. The name of the al fresco eatery is a nod to the European country but also to the pool game. “Marco Polo itself is a little bit of the fact that we’re not taking ourselves too seriously overall.”

That was the approach from a design perspective, too, he added.

“I didn’t want it to feel too cool for school,” said Brosh of the space, which has an indoor and outdoor flow. The team worked with Venice-based design and architectural studio Electric Bowery. “We were all very inspired by creating an urban, tropical-like experience. It almost felt like Mexico City, more than anything else. The idea was to create this compound that felt lush but quirky at the same time and to pay homage to its location being in Silver Lake, where I think you have to be careful about imposing very mainstream ideas into the market.”

“We’re looking more to the future of Silver Lake and how that whole community has really improved over time,” he continued. “It’s become more affluent, and we’re reflecting that in the design and the way we’re thinking about our restaurant. There’s room in the market for something that’s a little more upscale in terms of its sensibility…We’re going to let the community tell us how they want to really utilize the space. We’re meant to be an amenity to the neighborhood overall. We want to fit in to the fabric of what makes Silver Lake great.”