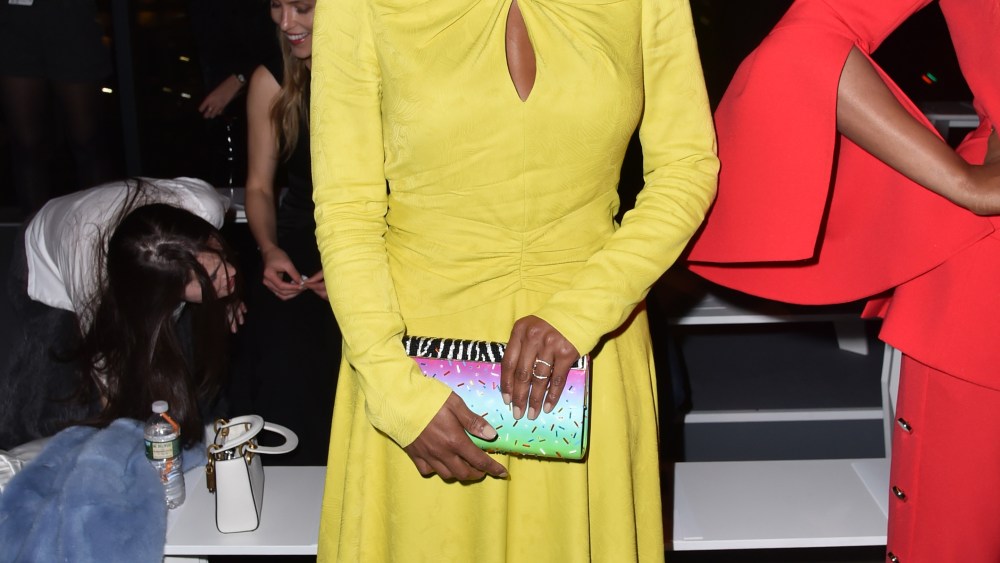 The moments leading up to a runway show during New York Fashion Week often mirror the frenetic pace of Manhattan’s bustling streets. However, the mood on Sunday evening ahead of Prabal Gurung’s fall 2018 show was noticeably subdued.

“It’s kind of nice that it’s quiet — after all, it is Sunday,” observed author Janet Mock, who was proud to be sitting front row for the 38-year-old designer’s latest offering. “Prabal is using his platform in a way that broadcasts messages of hope and resistance in this political climate, which is essential.”

Mock, a transgender rights activist who with Ryan Murphy is currently developing a television series centered around underground LGBT culture in Eighties New York, described working with the “American Crime Story” director as “a lesson in discipline and juggling.”

Tarana Burke, who was seated beside both Mock and political staffer Huma Abedin, noted the number of powerful women in the room. “There are some history-makers here tonight,” exclaimed the civil rights activist best known for starting the “Me Too” movement. “It makes me feel strange [to think I’d become part of history]. I’m really a worker and about rolling up my sleeves and doing the work. If that lands me a place in history then I would be among amazing company.”

The Harlem resident has no plans to attend other fashion shows this week and says it was important for her to support Gurung because “he’s shown a real interest and desire to amplify the voices of women and women’s issues. He has a real connection to what’s happening in the world around women.”

Cardi B. and fiancé Offset typically cause a frenzy upon entering such an event, but reaction to their arrival reflected the tranquil tone of the room as the couple entered without much fanfare. Continuing to decline fashion week interviews, the rappers greeted La La Anthony and quietly found their seats beside Laverne Cox.

“I love fashion week, but I’m ready to be home,” admitted Sistine Stallone, who sat beside fashion week fixture Olivia Palermo. “This is all a big growing-up process for me. My parents let me move to New York, which is definitely a big step at 19 years old and I’m living alone, which I love.”

The daughter of Sylvester Stallone, who moved to New York just three weeks ago, is adjusting to her newfound independence. “I’m doing things that I never did before like buying groceries for myself and cleaning the toilet. I love it. Every step I’m learning and finding out more about myself.”

Whoopi Goldberg, who is making the rounds this week with appearances at Jason Wu and Christian Siriano, sat discreetly at the end of the front row. As Gurung presented his collection, which was led by model Gigi Hadid, the designer maintained his activist message. For the music-free finale he sent his models out en masse each carrying a white rose, which has become a symbol of unity in the “Me Too” movement .“I got nervous there at the end because I thought I had missed something,” revealed Goldberg after the show. “I thought ‘uh-oh,’ I missed a part, but I really loved it.”

The crowd filed out as orderly as they had entered while one attendee brazenly smoked marijuana inside the venue, despite controversy last Wednesday when rapper Don Zio P lit a joint on the runway of the Grungy Gentleman show. “Maybe that’s why everyone was so quiet,” remarked an exiting guest.