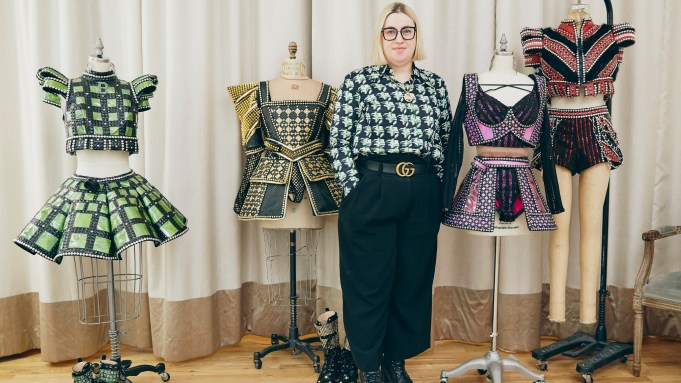 “Oh my god, it’s the best brief ever,” says costume designer Gabriella Slade of “Six,” the musical that made its debut at the Edinburgh Fringe Festival in 2017 from students at Cambridge and has since gone to the West End in London before arriving on Broadway today.

The show, warp speed at just 80 minutes, features the six wives of King Henry VIII as modern-day pop stars, putting on a concert. For a historical fashion lover like Slade, who designed the costumes for the Spice Girls and their dancers for “Spice World” last year, it was the ultimate opportunity.

“A pop and Tudor mix is a costume design dream, really,” she says from the John Paul Kristiansen studio in Manhattan’s Garment District, where the show’s Broadway costumes were crafted. “So I absolutely had to do it.”

She began with Pinterest, pinning contemporary pop artists. The show’s six queens each have a modern-day music muse: Catherine of Aragon is Beyoncé, Anne Boleyn is Miley Cyrus, Jane Seymour is a mix of Adele and Sia, Anne of Cleves is a mix of Nicki Minaj and Rihanna, Catherine Howard is Ariana Grande and Catherine Parr is Alicia Keys.

“I started looking at those silhouettes, those vibes of those artists. It wasn’t necessarily restricted to the aesthetics of them at all, it was more that it was the vibe of the artist,” Slade says. Brands that inspired her included Alexander McQueen and Balmain.

Such a point of reference included the Balmain gown Jennifer Lopez wore to the Met Ball in 2018 for the “Heavenly Bodies” exhibit.

“That was a really great textile reference for the show,” she says.

Slade, who is from Basingstoke, England, and is based in London now (she heads home soon, after having spent the last six weeks in New York prepping for the Broadway opening), has always loved historical fashion and design. She chose to work with Tudor-like shapes from a design perspective, made from contemporary fabrics (Swarovski crystals make their way into Anne of Cleves’ look). Most of the queens’ skirts have an opening at the front, meant to evoke the four-part skirts from the Tudor era.

“The lattice work is very in keeping with stained glass windows and the religious aspect,” Slade says. “Architecturally, Jane Seymour’s bodice has a connection to architecture at the time.”

The costumes are relatively similar to what was seen onstage in London, with a touch more detailing: additional studding and lattice work.

“We call them glow ups. We thought we’d do a little bit of a Broadway glow up,” Slade says.