“Let's meet in Midtown” has never been a mantra for the fashion crowd, but a new rooftop lounge in the Garment District aims to change all that. 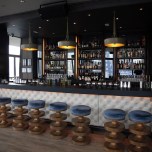 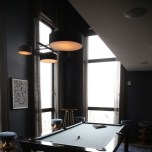 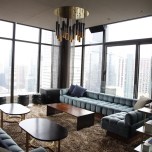 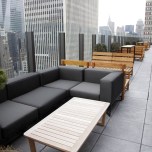 “Let’s meet in Midtown” has never been a mantra for the fashion crowd, but the Skylark Lounge aims to change all that.

Since opening in November, staffers from Calvin Klein, Ferragamo, Suno, Cushnie et Ochs and other nearby businesses have dropped by for after-work drinks and in some cases private parties. Resting atop the 30th floor of 530 Seventh Avenue in Midtown Manhattan, the bar and soon-to-open rooftop terrace required two years of construction and an $11 million investment by Savitt Partners, according to founder and president Robert Savitt. “I have worked in this area for more than 30 years and we have over 300 tenants,” he says. “I know so many people and everyone had the same complaint, ‘Boy, we have nowhere to go to.’”

A mutual friend, Anne Waterman, hooked up Savitt with David Rabin, a familiar face to many New Yorkers due to his partner status at The Lambs Club, Jimmy at The James and Bar Naná. Another contact steered Savitt to Jim Kirsch and Alison Awerbuch of the catering company Abigail Kirsch, and before long he’d signed them up, as well as Rabin. Meyer Davis Studio, which revamped Jonathan Tisch’s Loews Regency Hotel, handled the Skylark’s swish cantilevered interior, which includes several private and semiprivate areas. Open Monday through Friday, weekends are set aside for weddings, private dinners and other gatherings.

In May, when a 141-person rooftop bar and terrace opens, patrons will be able to get an al fresco view of the Empire State Building, the Chrysler Building and the neon New Year’s Eve ball aloft in Times Square.

Savitt’s commitment to the Garment District is far from a new-found engagement. He spent a year traveling internationally competing on the pro tennis circuit (his father, Dick, was Wimbledon’s men’s champion in 1951), but Savitt’s family has literally been rooted in the neighborhood for generations. In 1929, his maternal great-grandfather, Louis Adler, built 530 Seventh Avenue to anchor the north end of the Garment District.

“My whole thing with the Skylark is that it will not only keep the fashion people that are here but it will also bring the ones who left back because now there is a place to eat and drink,” Savitt says.

The area certainly is evolving. Twenty-eight new hotels have gone up in the Garment Center since 2005 and five are in development, according to the Fashion Center Business Improvement District. As things stand, there are nearly 5,100 hotel rooms and five rooftop bars. While out-of-towners are as welcome at the Skylark as everyone else, Savitt and Rabin are intent on making it a no-need-to-think-twice-about-it place for regulars from the worlds of media and finance.

On the menu, crafted by Awerbuch and Kirsch, are sliders, lobster tacos and french fries as well as other rooftop bar favorites. General manager Andres Rizo, whom Rabin met a decade ago through Fern Mallis at the Bryant Park tents, keeps all in order from 4:30 p.m. until midnight.

The six degrees of separation that so often makes New York City’s fashion, media and entertainment worlds run seems to be working to Skylark’s advantage. After Bryan Lourd was honored at Alice Tully Hall recently, the Creative Artists Agency power agent and his well-wishers (Jimmy Fallon, Anne Hathaway and others) made their way to Skylark for the after party. Trudie Styler, who was among the revelers that night, lined up the space for a 210-person bash after her husband Sting’s Madison Square Garden show with Paul Simon. The fact that the bar is within walking distance of The Garden has helped to create a preconcert crowd.

And Lambs Club diners have been keen to check out Skylark, thanks to Rabin, who nonetheless wants to slowly build the Skylark buzz. “I’m not trying to blow it out, not trying to be white-hot and then after three months everybody’s like, ‘Oh, I’ve been there 600 times — I’m not going back,’” he says.