The Welsh actor is in the driver’s seat for “Dracula Untold,” an action-horror movie that’s a hit internationally before it even opens in the U.S. on Friday. 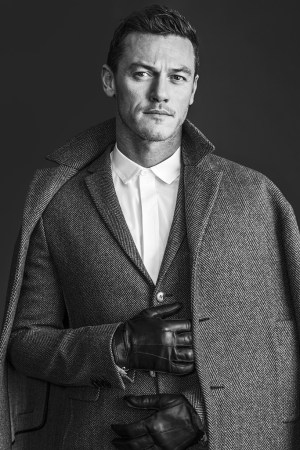 Luke Evans walks into a Manhattan photo studio with a bit of a strut in his step. He looked very much the part of an action star. His hair slicked back, dark shades in place, he wore a tight leather jacket that showed off a muscular build. Think Tom of Finland in designer duds and a Bulgari watch.

It was a look in keeping with the tough image Evans has cultivated in the movies, playing the heavy in the likes of “Clash of the Titans,” “Immortals” and “Fast & Furious 6,” where he went pectoral to pectoral against Vin Diesel and Dwayne “The Rock” Johnson (and lost — he was the villain, after all).

On Friday, his new movie, “Dracula Untold,” opens in the U.S., but this time, he’s in the driver’s seat.

The movie is already a success — it made $21 million from 25 international territories this past weekend — and, at 35, the Welsh actor is emerging as a bona fide action star of his own, though one with a background unlike any action star before him.

Later this year, Evans will reprise his role as Bard the Bowman in the latest chapter of “The Hobbit” and he’s been tapped as the star of a remake of “The Crow.” Fashion brands are paying attention, too — during the spring men’s shows, he showed up front row at Calvin Klein in Milan and Louis Vuitton in Paris and he was recently named a Bulgari brand ambassador. For the various “Dracula Untold” premieres, he’s opted for traditional English tailors like Edward Sexton and Gieves & Hawkes.

“I’ve been building up roles for six years. This is my 20th-something movie,” he says. “And they’ve been bigger and bigger and this year I’ve got two of the biggest movies of my career so far. So, you know it’s all going in the right direction.”

In the photo studio, Evans shows a different side of himself than the one viewers are accustomed to in full-throttle genre movies.

He waits for a photographer to set up when “Trouble,” a melancholy love song from the singer-songwriter Ray LaMontagne, comes on. Almost under his breath, the actor starts singing to himself. He knows all the words.

“It’s a gorgeous song, isn’t it? Blues-y, romantic,” the actor says. He name-checked some of his other favorite singers — Roberta Flack, Nina Simone, Billie Holiday, and it seemed that the trait they all shared was a penchant for singing about heartbreak. “I guess so,” he says. “I just love the sound of a black woman’s voice.”

It’s hard to picture Diesel saying that. Evans, on the other hand, owes his career to music. He trained as a singer at the The London Studio Centre and enjoyed his first successes on stage musicals. He originated the lead in “Taboo,” the Boy George musical.

The part won him the attention of the gay press. In one interview with the Gay Times, a British magazine, he told a reporter, “People come up to me in pubs, gay pubs, mind you, and can’t believe that I’m gay.” The turning point in his career came in 2008, when he recalibrated with a drama, “Small Change,” about the intense friendship between two Welsh boys.

“It was the first time I had been allowed an opportunity to present myself without the singing aspect and all of a sudden they were aware that I could act,” he says.

The part of Apollo came next in “Clash of the Titans,” Zeus in “Immortals” and now “Dracula Untold.” All three movies are part of a recent formula in Hollywood that repackages familiar stories and remakes them as action movies, so as to better appeal to that box-office sweet spot that’s mainly made up of teenage boys. Evans’ Dracula is not the urbane vampire we’ve come to know, but a vampire on steroids, muscle-bound and prone to violence.

Like most action films, “Dracula” has the potential to spawn a franchise and Evans is keenly aware of the importance of appearing as marketable as possible. As his stock in Hollywood has risen, he has downplayed his sexuality. “It’s not something he is hiding, but not a fact he wishes to discuss in the press,” as one of his publicists put it. But when it was suggested that in taking on these action roles, he may be setting a precedent, Evans didn’t entirely sidestep the question.

“It’s good for people to look at me and think this guy is doing his thing and enjoying what he’s doing and successful at it and living his life,” he says. “And that’s what I’m doing and I’m very happy.”

At the moment, he is deciding between a variety of projects to do next, as well as “The Crow,” which has not set a production date. After the photo shoot, he had plans to go see “The Real Thing,” now on Broadway with another singing-dancing action star, Ewan McGregor, and the idea of returning to the theater was attractive to him.

Back in his leather jacket after wrapping up the photo shoot, he is asked about the LaMontagne song. Does he miss singing at all?

“I miss entertaining people by singing, yeah,” he says. “It’s a lovely thing to be able to sing.”