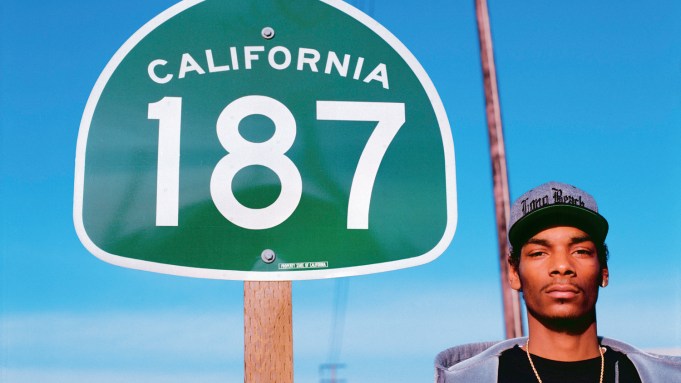 Chi Modu, the Nigerian-born and New Jersey-raised photojournalist, was the director of photography at The Source magazine during the defining era of hip-hop in the Nineties. In addition to the 30-plus covers he shot, he also captured many candid and unexpected moments of some of the genre’s biggest names, long before they were famous.

Modu began a project called “Uncategorized” in 2013, with large-scale images appearing on the exteriors of buildings in New York as a way to make his work available to everyone. The exhibit has since shifted and toured  the world and on Saturday, a version of it will open in Los Angeles at the HVW8 Gallery, presented by Adidas Originals.

Alongside some iconic images of hip-hop royalty including Tupac, Biggie, Nas and ODB, “Uncategorized” also features previously unseen works from Modu’s photographic archive. The show, which runs through Sept. 23, celebrates hip-hop’s creative energy and raw, unrivaled ambition, showcasing Modu’s documentation of the legends behind the sound.

On the eve of the exhibit’s opening, where Modu and Snoop Dogg were to have a private fireside chat detailing some of the famous images, the photographer and the rapper sat down to talk with WWD in Snoop’s trailer. 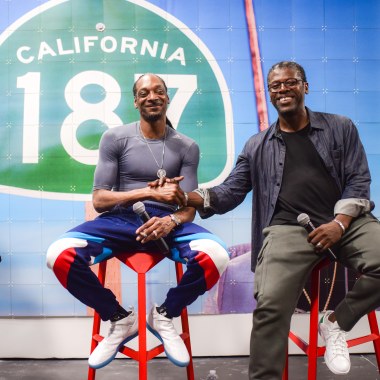 WWD: How did you curate the images for the Los Angeles show?
Chi Modu: I leaned more towards L.A. here. This series ranges between 1991 and early ’97. It’s kind of a defining era for hip-hop. It wasn’t the beginning or the end, it was a time when it went a little bit on steroids. That’s when we started to become national and international. We had the first global rap celebrities and stars coming right after Run DMC. Snoop and them took it off the charts. It’s nice to be a part of such a critical time in hip-hop. To me, it’s the equivalent of the British invasion in Sixties rock ‘n’ roll. As rock changes, those artists stay relevant. The Stones, Motley Crüe, Slayer, it’s the same thing with hip-hop — the Tupacs and Biggies are here.

WWD: When did you realize this group of artists was taking it to another level?
C.M.: The first time I knew we went to a different level was when I saw Snoop in a commercial with Lee Iacocca. It’s been almost 15 years since that. Imagine how it is watching the Snoop I knew at 19 years old, now seeing him with the football league and on Martha Stewart’s show. It’s really pretty crazy but it’s nice to see. I knew these guys when they were very young. I was young as well, but I was really serious about documenting the history. At my core I’m a documentarian, a storyteller with a camera, so I have to make sure to tell you the whole story of the times I’m photographing. Not just the portraits, but also the house, their mother, their whole world, so that’s why you can walk through my photographs and get a real feel of what was going on outside of cover shoots.

WWD: Did you become friends with your subjects?
C.M.: As a documentarian, we need a certain amount of closeness to do what we do but we don’t have to be friends. We must respect you, and once we respect you we then have empathy, and once you come with empathy and respect you are open, and then the person gives you who they are. You can do it fairly quickly if you are open. I’m not from the same neighborhoods they are from but I understood them right away so I knew it was my job to take them out into the world. I am shooting 4×5, 6×7 in 1994. I had a high technical ability so I could apply that to this genre that people thought was raw, and just putting those two things together really boosted the whole space a lot.

WWD: What was it like when Tupac died?
C.M.: You become a little God-like. It’s a little weird. One thing about Tupac, the reason those photos exist, is that he always knew the importance of image and he knew it was through your image that you stay. I see a lot of young artists now, sometimes they will strip their whole Instagram account and have one photo before they release a whole album. In a way they’re eliminating their history. They are thinking in terms of Snapchat generation and it doesn’t really work. Tupac understood that very well. He left a strong visual history of himself so it’s almost like he’s still here.

WWD: What’s your role in recording this history?
C.M.: The visuals explain who you are. I’m a visual artist and a lot of these guys are performing artists. They are really two different things even though they overlap a lot. Performing artists are the ones that make it happen and the visual artists document it and prove that it happened, so our thing comes later. Because we took all these pictures, people can look back on the times and look at a culture, so that’s really our role. We are like the tortoise and the hare in a race, so 25 years later, people understand it. It’s a very slow, methodical move, but in the end it’s a photographer’s life and I think a lot of people get distracted today because they want to show you right away what they are doing and it’s like, “No, start in 2028. It’s a 10-year or 15-year thing.”

WWD: How do you build such a trust with your subjects?
C.M.: I’m fairly disarming because I have a lot of respect for people. That’s my approach to life. I respect them; I’m not judging what they’ve had to do because I didn’t grow up like that. I’m just here to photograph and hopefully put a nice little spin on it and see you as beautiful because we are the ones who actually see you.

WWD: What did you think of Chi when you first met him?
Snoop Dogg: I just knew he had done great work and we clicked from the beginning. At the same time I was young so I wasn’t really familiar with cameras and every cameraman I met was different. By him being from the East Coast and having pictures of the artists that I really respected and loved, it made me automatically gel with him and want to be a part of his résumé. Early on I didn’t know it’d be classic like this, but just knowing he was doing s–t with the people that I really respected and loved and the way it looked in the pictures from Ice Cube to EPMD to whomever, made me want to do pictures with him. That was around the time you would look and see who was the photographer, who was the man behind it, so you could see who he was and you could connect with him. That’s why a lot of photographers and directors got used over and over, because the word got out they were great at what they did and we were a community that was a brotherhood. So if his s–t was dope, we would look and say, “I want my s–t to be dope, who did it? Chi Modu. Who is that? Let me reach out to him.”

WWD: What was your relationship like with the camera in the beginning of your career?
S.D.: Early on I was very conscious of the camera but I didn’t know how to work the camera; the camera wasn’t my best friend. ‘Cause I was like young and I was more into the rapping and the creative side. I wasn’t really into expressing myself and talking to you and explaining s–t like I do now. I think that was like the infant stages of who I was, creating me and finding out who I was through more experience.

C.M.: You were shy a little bit visually, but you were a natural. So it was easy, once you connect with him, every picture. If you look at my sheets of him, about 75 percent are quality. Usually you look at photographer’s sheets and 20 percent are usable, so he was natural. So that’s why I can keep releasing the pictures, it’s just variations of the same. But there were so many good ones that I can just keep flowing it.

WWD: Is he still the same?
C.M.: No, at 19 he was more intense. He’s mellowed a little bit, thank God. But he was always cool, always smooth.

S.D.: The environment was the jungle and I played the role of the stealth lion. Not the lion that was loud, but the lion who could do it in the midst of a bunch of crazy animals. Though I always was. There would be so much crazy s–t going on and even when s–t would get active there was a calm about the way we reacted to it. You know what I’m saying? We wasn’t loud about it, we handled it, we’d get it done.

C.M.: Do you remember when we were riding in South Central? The Cross Colors car was in the front, I was in the middle car — a convertible — and D.O.C. and Dre were in the car behind. You were in the Cross Colors car, and that little cat on the corner pulled his bandana up and went for this thing and Snoop looked back at him, had his, and the guy stashed it, and said, ‘Go ahead.’ But he said later he saw some cats across the way with AK’s so he knew it’d be a mess. I remember that and it was like, “All right, go do your career.” That was a pivotal moment.

WWD: How would you describe the scene back in the Nineties?
S.D.: At that time it was all about a hip-hop energy. I don’t know what the s–t is going on now, but at that time it was an energy; if you was hip-hop you were naturally reflected in another person that was hip-hop no matter their race, their religion, their color. Hip-hop connected so many people and that’s how we connected with him. It was about us liking his work and him liking our work and us doing work together that we loved. Why don’t you do that s–t? Why don’t you do that s–t? It just goes on and on, it’s a great referral from one artist to the next. And before you know it he has a catalog.

C.M.: Now we’re coming back together after 20 years. Now it’s like fine wine, you can drink it. You couldn’t drink it before, the grapes weren’t ready.