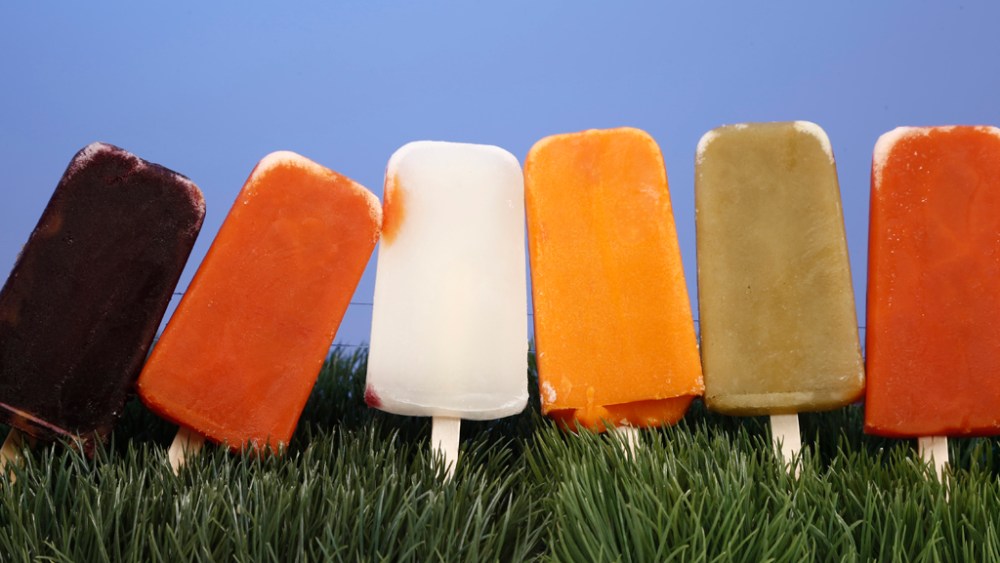 Ask Sophie Milrom what she thought she might be doing after law school and starting a business selling ice pops would not have been her answer. “It seems so random. I’m a lawyer,” the 27-year-old entrepreneur trills one recent afternoon in New York. But it was while studying for the bar exam that the idea for EatPops was born. “For the first time in my life certain things were just too inconvenient — cooking, or running out for a custom meal. And so I went to the food store to stock up on snacks, and was surprised that everything had a ton of sugar or artificial flavors or sweeteners,” she says. “I was thinking about the juice craze and how it’s so inaccessible to people, because it’s one, really expensive, and two, really inconvenient. I realized that a way of making a shelf-stable version of the juice craze was freezing the juices.” Eureka!

She started making ice pops out of the typical juice blends one might find at Juice Press or Organic Avenue, testing them on her friends (and keeping them in an industrial freezer in her living room) before manufacturing a batch of samples. “Some things taste delicious together but when you mix them they turn a really unappetizing color,” she says of the process. “So, orange juice is delicious and grape juice is delicious and together they don’t taste bad but they’re brown. And nobody’s going to buy a brown ice pop that isn’t chocolate.”

EatPops launched last summer at Life Thyme Market in the West Village, while partnerships with fitness brands like SoulCycle, Lululemon and ModelFit followed throughout the summer. With EatPops, Milrom is capitalizing not only on the zeitgeist at large, but also her personal healthy outlook (in her business bio she notes that she “meditates twice a day, goes to yoga 5 times per week”). “Somebody said once if you had a Ferrari you wouldn’t put diesel fuel into it. I think everybody is realizing that it’s really important what you put into your body,” she says. “Everything in the frozen-dessert section of the grocery store ranges from really, really, really bad for you, like cookie-dough ice cream, to less bad for you. But there’s nothing that offers you nutritional value or functional benefits.”

As such, EatPops’ flavor combinations — including beet, apple and carrot or kale, banana and pineapple — are named after functional benefits like “Activate” and “Restore” and all seven flavors are all-natural with no added sugars, sweeteners or coloring. (A box of three, with Lichtenstein-inspired packaging by Doubleday & Cartwright, costs $6.99.)

Just shy of a year later, Milrom’s frozen treats are in 150 stores in the Tristate area, including Whole Foods, and she recently launched in Los Angeles with AmazonFresh. She was able to scale the business after a round of funding in October, when she secured a group of investors who include the founders of Sweetgreen and Kal Vepuri, whose portfolio includes Warby Parker and The Arrivals. They saw an opportunity in the effervescent Milrom’s drive: She called her company Innocent Foods and aims to grow it into a lifestyle brand.

As to the bewildering turn her career has taken, Milrom has come to terms with her calling. “I realized that a lot of the entrepreneurs I look up to, most found problems in their [own] homes and were solving that exact problem, not a problem in someone else’s home,” says Milrom. “So, for example, the founder of Spanx always said that she was cutting off the bottom of her pantyhose. And I thought that was a really practical way of approaching it. Like, if I have this problem and I’m solving it for myself, I can help other people solve it, too.”

She adds: “Nothing makes me happier than when people look at me and say, ‘Why didn’t I think of that?’”