‘I’m a Champion. You’re a Champion, Too’: Inside SouthBox, the Renewed Bronx Boxing Gym

The Bronx boxing gym reopens in a new and improved space where models, celebrities and locals alike flock to train.

Opening a new gym? In this climate?

Eric Kelly says yes — and his fighter spirit is so convincing, you may just be hightailing it to the Bronx and lacing up a pair of gloves by the end of this.

The original SouthBox opened three years ago, also in the Bronx, before demand led Kelly and team to seek a bigger space, with a 20-foot ring compared to the previous 12-foot one. The new space, which opened Sept. 2 and which will be operating at 33 percent capacity per current New York State mandate, will be able to house amateur boxing fights like the Golden Gloves, as well as continue its offering of private and group classes that have attached a loyal following of both neighborhood locals and models like Jessica Hart and Cindy Bruna.

Kelly is a four-time national amateur boxing champion and a two-time New York Golden Gloves champion who at one time was ranked number one nationally and number four worldwide. His fighting career was cut short after being hit by a pool cue in his eye, leaving him with a floater.

“But you can’t keep a good thing down, baby,” he says. “I understand life is a roller coaster. It’s going to do what it’s got to do. You’re going to have your loops and your humps and bumps and everything, but you’ve got to just stay grounded and you’ve got to keep swinging.”

He’s been training ever since.

“I always say the fight is 12 rounds. You might win some rounds, you might lose some rounds. You might get knocked down in one round, but it ain’t over until it’s over. You’ve got 12 rounds. I’m a parent. I’m a former boxer. I’m a business owner. I’m even an entertainer. I’ve done a lot of stuff on television. I’m going to triumph with whatever it is that I do; if I stick my mind and heart to [it], I’m going to triumph. I won’t break down. I’m going to break through. You know what I mean?” 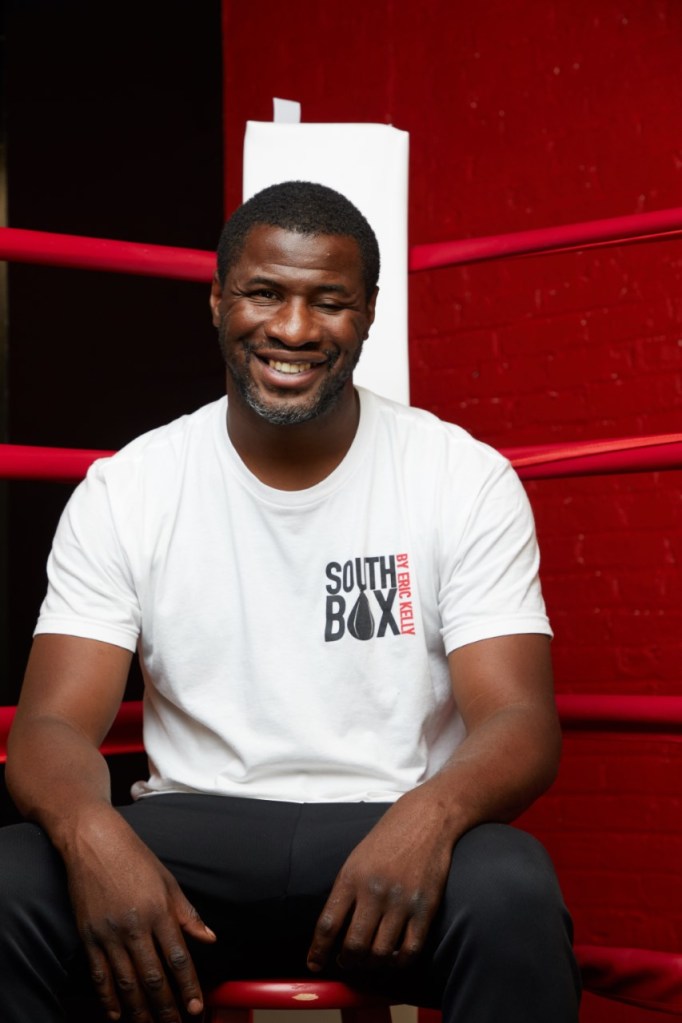 Kelly says he works with clients from “all walks of life,” and approaches each session differently. His model clients, he says, aren’t working to build muscle, so he’ll train them separately versus his “fighters,” who can spar and do defense drills in groups.

“We have so many people from the Bronx, and that’s what I love about it,” Kelly says. “The Bronx has a very rich history of boxing. Just by being in the Bronx, that’s going to be a specific demographic gravitating towards me. Then, when you come in the gym, you don’t have to feel that you’re not welcome at my gym because under this roof, everybody’s welcome. We’ve got people from so many demographics. I might have Jessica Hart, I might have Cindy Bruna, I might have [Olympian] Christina Cruz. I will have so many different top athletes and entertainers and day-to-day people like myself from all over the world. We’re all under this roof. This is where we come to do what we’ve got to do and everyone’s equal. We come in the name of peace and love and prosperity.”

That’s the spirit he wants people to come away from SouthBox feeling — yes, a good physical workout, but boxing, he says, is 95 percent mental. He wants you to learn to believe in yourself.

The months off during the pandemic, during which they were putting the final physical touches on the new gym, have renewed Kelly’s focus and motivation (if that wasn’t immediately clear).