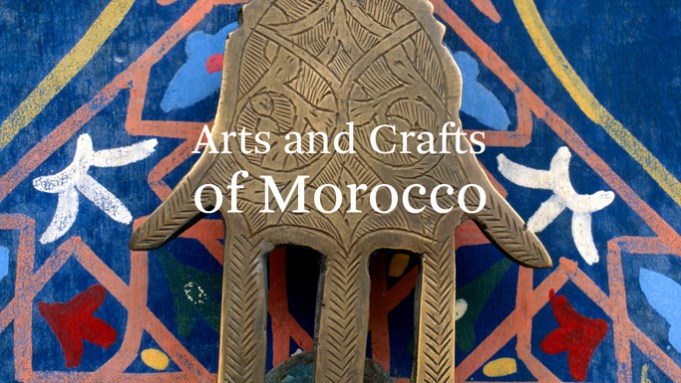 There’s a little something for everyone in spring books — a tome on Moroccan arts and crafts, the definitive visual record of the young Chloë Sevigny and a work on the sharp vintage cars that undertake the Mille Miglia race. What they all have in common is an upbeat, even celebratory, quality.

“Arts and Crafts of Morocco” by James F. Jereb (Thames & Hudson) showcases the remarkable achievements of the artisans of this still exotic country. Certain elements remain pivotal to the jewelry here: hands of Fatima and other amulets, filigree silver work, coins, coral, amber, charms with zoomorphic or geometric designs, Koran boxes and Agadez crosses. Meanwhile, stars and other geometric designs and zoomorphic motifs, along with a strong influence from Spain, figure in the country’s remarkable ceramics. Also notable are the zillij, panels made from ceramic set in enamel.

“A Sense of Place: Houses on Martha’s Vineyard and Cape Cod” by Mark A. Hutker,  with Marc Kristal (The Monacelli Press). Hutker as a firm is known for its sense of stewardship and sense of place, and the work shown here reflects that, with weathered wooden structures and tiled roofs which are congruent with the architectural vernacular their chosen areas have always been known for. The Salt Shack on Buzzards Bay is representative, with its variation on a traditional shape and its use of windows to open up as much of the house, which is set on a narrow neck of land, as possible. Right outside can be seen pristine, protected bay. The interiors are typically clean and spare.

“The Bow Tie Book” with illustrations by James Gulliver Hancock (Universe).  This is a lighthearted look at bow ties with charming photos and very little text, most of it pithy quotes. An example: “The thing about a bow tie is that it does a lot of the talking for you. ‘Hey!’ it shouts. ‘Look over here. I’m friendly; I’m interesting.’”—David Sedaris in  “Buddy, Can You Spare a Tie?” from “When You Are Engulfed in Flames.” Another: “Bow ties are worn by magicians, country doctors, lawyers and professors, or people trying to look like the above. But perhaps most of all, wearing a bow tie is a way of broadcasting an aggressive lack of concern for what other people think.” — Warren St. John, The New York Times.

“A Touch of Style” by Carlos Mota (Assouline). Mota is a Venezuelan-born sittings editor who worked extensively with Margaret Russell at Elle Decor and Architectural Digest, to whom this book is dedicated. Here, in these big colorful photos, Mota shows exactly what his contribution was. “Loud statements are my trademark, in life and in work,” he writes. “Azalea branches like these, for instance, are never quiet.”  He’s referring to big, lush branches put together in a tall vase in Candace Bushnell’s colorful room, decorated by Susan Forristal of Forristal Smith Interiors and dominated by eau de nil couches and a blue, white and red painting. Another room, this one belonging to Michelle Smith and decorated by Shaun Jackson, features yellow-and-white striped chairs enlivened by stalks of yellow orchids spiked at the centers with purple.

“Chloë Sevigny,” by Chloë Sevigny, with a foreword by Kim Gordon and afterword by Natasha Lyonne (Rizzoli New York).  Fans of the actress should get a charge out of seeing her at every age, including modeling as a child and teenager. Most of the photos, in fact, show her when she’s quite young. She’s actually — somewhat scarily— 40 now. Here, she’s wearing everything from her birthday suit to an Elvis jacket to full-on evening wear for prom and, more recently, in shots that demonstrate that she looks good in just about anything, no matter how absurd. There’s almost no text except in the foreword and afterword. The pink gingham cover of the book is reminiscent of the cover of the groundbreaking Fifties book, “The Lonely Doll.”

“Mille Miglia: 1000 Miles of Passion,” with introductions by 1000 Miglia president Roberto Gaburri, Cavaliere Attilio Camozzi and Fritz Kaiser, chairman of the Classic Car Trust (teNeues). For those whose fandom extends less to androgynous actresses than classic cars, there’s this book. It’s full of photographs of outlandishly beautiful autos traversing the 1,000 miles of the car race it’s based on.

The race used to be a more standard  competition but, after some horrific accidents, is now limited to cars manufactured before 1957. So the book comprises many shots of Alfa Romeos, Bugattis, Maseratis, BMWs and other vintage cars in the countryside and towns of the route, often being cheered on by spectators.

“Portraits of the New Architecture 2,” with an introduction by Paul Goldberger and photographs by Richard Schulman (Assouline). This new book explores the work of 32 architects and architectural firms who are doing exciting new work. Among them are Asymptote Architecture, Dominique Perrault, Tatiana Bilbao, Bohlin Cywinski Jackson (BCJ), Annabelle Selldorf and David Adjaye. The detailed photographs illuminate the intent and purposes behind the buildings and spaces they are creating. Projects range from airport terminals to museum buildings to mixed-income housing.

“Oudolf Hummelo: A Journey Through a Plantsman’s Life” by Piet Oudolf and Noel Kingsbury (The Monacelli Press). There’s nobody who doesn’t love  New York’s High Line, and now there’s this book, the title of which adds the surname of its chief gardener, the Dutch-born Piet Oudolf, to the name of his nursery, Hummelo, run by his wife, Anja. Kingsbury is a well-known garden writer. The book illuminates the garden philosophy which led to the seemingly wild, native-plants-style creation of meadows and flowering plants which have riveted us all. The pictures, most of them by Oudolf, are evocative.