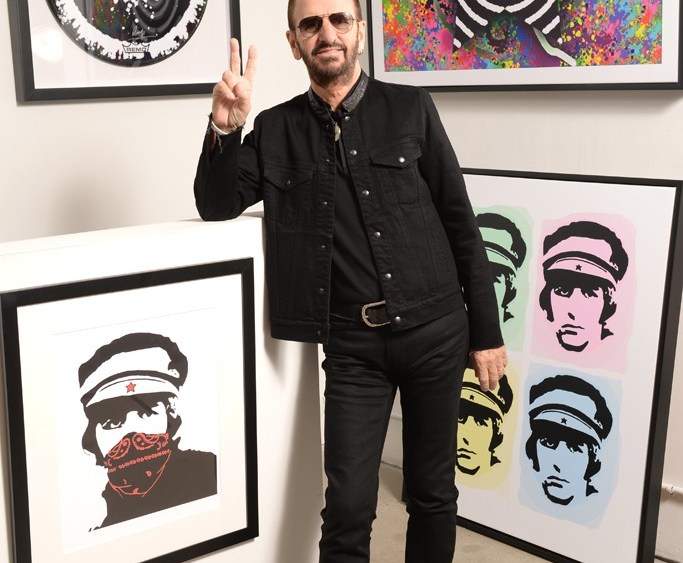 The former Beatle turns 74 today and his touring schedule and extracurricular activities would slow down a man half his age. Ringo Starr and His All Starr Band started performing in Canada in early June and will circumnavigate the U.S. through the fall.

That’s just one part of his busy year. Since January, Starr has been honored with the Lifetime of Peace & Love Award by the David Lynch Foundation, performed with Sir Paul McCartney on the Grammys and then again at the CBS taping of “The Beatles Tribute,” a special celebrating the 50th anniversary of the group’s first U.S. visit and appearance on “The Ed Sullivan Show.” Simon & Schuster published “Octopus’s Garden,” a children’s book based on his lyrics, and an exhibition of his artwork is working its way around the country.

At noon today in Los Angeles, Starr will stand in front of the famed Capitol Records building in Hollywood and ask everyone around the world to join him in a peace and love moment by hoisting their two fingers in the air in the universal symbol of peace. At the same time, it will be revealed that Starr will be the face of John Varvatos’ fall advertising campaign.

In addition to print ads, the initiative includes a behind-the-scenes short film and a social media component, all intended to raise awareness of the Ringo Starr Peace & Love Fund. For anyone who shares a photo of themselves flashing the peace sign via Instagram, Twitter, Vine or Facebook and tags it with the hashtag #PeaceRocks, $1 will be donated to the charity through the end of this year. In addition, Peace Shops will be installed at various spots where Varvatos merchandise is sold and 100 percent of the proceeds from a special Peace Rocks T-shirt will be donated to the charity.

Dressed in black with his signature wire-framed sunglasses and a pair of colorful sneakers, Starr made a pit stop in New York in mid-June to play The Beacon Theatre and unveil a collection of self portraits at the Soho Contemporary Art gallery.

“The Beacon was great last night,” he said. “New York and The Beatles, New York and Ringo; it’s like a bond we have. New Yorkers feel we’re from New York because of Ed Sullivan and Shea [Stadium] and the first landing was New York. So there’s an incredible great bond of love between us and New Yorkers.”

Asked about the sneakers, Starr lifted his feet in the air and said of the pattern: “These are Vans but this is ‘Yellow Submarine.’ The Beatles are doing clothes and shoe merchandise with different people now and this is one of the great aspects that really works,” he said.

But Starr is happy to let the experts do it and has no plans to launch his own apparel collection. “No. Then it’s hard work. I like to just find it, wear it and have fun with it.”

Over the years, Starr and The Beatles had their share of iconic fashion moments, whether it was their hairstyles, their collarless suits or their colorful “Sgt. Pepper’s” military-style jackets. Starr said even before he became a Beatle, he considered himself a stylish guy. “Before The Beatles, I was quite a good dresser in the other bands,” he said. “When you’re in a band — before it got to grunge — you dressed the bit. So yeah, I’ve always had an attitude with the clothes.”

But there are some outfits that he recalls with a cringe, particularly one lime green cardigan. “There’s always a few mistakes in your life, but that’s how it is.”

Today, he’s more apt to be decked out in Varvatos or a European line called The Kooples. “I don’t think you have it here, it’s in England. But I don’t say, ‘I have that, I wear that.’ I go round and I pick bits from a lot of shops, a lot of designers, a lot of brands. Just whatever I feel looks good.”

Although his personal style is still important to him, it pales in comparison to his primary mission in life, which is to promote the message of peace. In addition to today’s press conference and peace gathering and the Varvatos campaign, all of the proceeds from the sale of his art is being donated to charity.

Starr said creating art is one way he relaxes from his crazy schedule. But he doesn’t view himself as a particularly talented artist. “[Art] is easy in a way,” he said, pointing to a piece by Keith Haring in the gallery. “How great is that? But at the beginning, it was, who the hell is that crazy guy, there’s no faces? So whatever you do, promote it. I can’t really paint either, but I do. I just get the brushes out and I paint in acrylic. I tried oil, a friend of mine, George Condo, gave me a lesson. He’s been a friend for 30 years. Look at him. I remember when he started and now there’s no one bigger. With his crazy people that he paints. So get your brushes out, get on your computer and just create. That’s how it is.”

Varvatos said whether it’s art, music or philanthropy, Starr’s “music and heart are unique, not only in the rock ’n’ roll world, but the world in general.”

For 20 seasons, Varvatos has featured rock ’n’ roll legends in his advertising — luminaries that range from Willie Nelson and Jimmy Page to Kiss, who appeared last season. But Varvatos never dreamed he could get Starr to agree to appear in his ads.

“He played the Grammys and then the tribute to The Beatles, and I saw he was wearing my clothes,” Varvatos said. “But it’s a Beatle. I said, ‘There’s no way he’s going to do anything like this.’ We made a call to his publicist anyway, and he immediately said yes. It actually happened quicker than most of the other artists we’ve spoken to.”

Starr said he hadn’t met the designer before, but was a fan of his clothes. “I bought a lot of stuff in his shop,” he said with a laugh. “I’d never met him, and suddenly I got a call that he was interested if I’d be the visual for the autumn collection. And so, I said, ‘Yeah, I’m interested.’ He’s had a lot of musicians like Jimmy Page and he likes music. If you go to his store, he’s got great photographs of artists and musicians, and I thought, ‘How good.’”

Adding that “I am that guy,” he said the decision was “easy because I wear a lot of his clothes anyway, so it was not a hardship.”

Varvatos said: “I was flabbergasted that it was so easy, uncomplicated and gracious.”

But what clinched the deal was the fund-raising component of the campaign. “It’s all going to charity, whatever I make,” Starr said. “I urge everyone to join us and use #PeaceRocks. For every upload, John will donate a dollar to the Ringo Starr Peace & Love Fund that through the David Lynch Foundation teaches meditation to people at risk and suffering.”

The campaign was shot in black-and-white by rock photographer Danny Clinch in Los Angeles. According to Stephen Niedzwiecki, founder and chief creative officer of Yard, Varvatos’ ad agency, “We wanted to create a classic image of Ringo that also captured his passion for peace. Inspired by vintage shots, every image features Ringo flashing his infamous peace sign, thus becoming the signature of the campaign.”

Starr particularly liked Clinch’s shot of him sitting in an ornate, high-back chair with a white dove perched over his left shoulder. He called it “a little like the Richard Avedon photo.”

In an interview, Starr joked that he’d “waited a long time to be a male model, and what a great way to do it — all for a good cause.” In the photos as well as in the film, Starr wears a John Varvatos black cutaway asymmetric leather biker jacket with front-button closure and snap collar, black linen V-neck T-shirt, black jeans and a pair of double-zip engineer boots in black garment-dyed leather.

Although the designer hasn’t had a charitable component in his ad campaigns before, he’s happy to do his part this time. Saying that the fee he can afford to pay the musicians to appear in his ads is modest — “We pay a favored nation fee; it’s not a lot of money.” — Starr’s only question before agreeing to appear in the ads was if they could help “raise awareness for global peace.”

And all that do-gooding apparently agrees with him. At an age when most of his contemporaries are sunning themselves on a Florida beach, Starr is still as energetic and lively as a teenager.

“I am going to be 74 on July the 7th,” he said proudly. “I can’t hide, can I? I look after myself, I work out, I watch what I eat, and that’s how I do it. And I work a lot, I play a lot. When I’m touring, I don’t want to be on holiday. I don’t want to be anywhere like five days and then we do a gig. I do five gigs a week and we have days off so the trucks can get to the next gig. We do two in a day or three in a day and sometimes we do four in a day on the run. You feel tired after that, but three is easy.”

So now that Starr has agreed to appear in the ads, how is Varvatos going to top that? “You can’t top a Beatle,” he said. “It doesn’t get any bigger than that.”