A look at what’s new and worth checking out this summer in France.

The French Riviera crowd looking for a fashion fix this summer can head for the hills. Just north of Marseille, Edith Mézard’s Château de L’Ange, known for her embroidery workshops and lifestyle boutique, is featuring a four-month fashion exhibit and pop-up shop set up by vintage fashion dealer Didier Ludot. Called “Villégiature Couture en Provence,” the show runs through the end of September and is split into four themes, all present throughout the summer but with one dominating each month: Gabrielle in Biarritz, which just wrapped up; Jackie in Capri; Brigitte in St. Tropez, and Anouk in Deauville, which channels looks for a seaside boardwalk and horse races.

Clothing from brands including Yves Saint Laurent, Chanel, Pucci, Issey Miyake, Valentino, Hermès and Givenchy dates back as far as the Sixties and runs up into the Nineties, with luggage from the Thirties, and price tags ranging from 200 euros to 5,000 euros and up. For fashionistas after something brand new, Didier Ludot and Felix Farrington have created two little black dresses exclusively for the event.

At the time of going to press, there were still some vacancies at one of the most elegant and intimate new addresses in Saint-Tropez: the Epi 1959. The storied site was acquired in April by American businessman Frank McCourt, owner of the Olympique de Marseille soccer club, and reopened in June following a delightful refurbishment preserving its retro charm.

Originally, the private residence of French entrepreneurs Albert Debarge and Jean Castel, the site had its heyday during the golden age of Saint-Tropez. In its new incarnation, guests can book one of eight cottages facing one of the hotel’s two pools or Pampelonne beach.

The fragrant gardens — filled with ancient olive trees and pots of lavender and lemon trees — were designed by American landscape gardener Madison Cox. Behind the charming old school interiors was Monica Damonte, with a decor mixing bamboo furniture, floral and velvet wallpapers by Rubelli and Ralph Lauren, and palm print fabrics by Hermès.

The site also boasts two clay tennis courts surrounded by rose bushes, and the main building has a games room and restaurant, with cocktails served pool-side.

A pool-facing cottage costs around 1,050 euros a night; one that’s beach-facing goes for around 1,250 euros a night, and the two suites 1,750 euros a night. The price includes breakfast, access to tennis, yoga or pilates, and transfers to Saint-Tropez.

Visiting a grave might not be everyone’s idea of light summer entertainment, but when it involves the latest installation by conceptual French artist Sophie Calle — with, as its location, the woodland surrounding the Château La Coste in Provence — it just might swing it.

Titled “Dead End,” the permanent installation continues themes the artist has explored in previous works realized for cemeteries in Geneva, Switzerland, and Brooklyn, N.Y. It will also serve as a platform for live performances by the artist, with the first scheduled for July 21.

In tandem, the château is hosting a temporary two-part exhibition by Calle that will wrap on Aug. 15. Based in the Old Wine Storehouse, “Black Series,” explores “How do you deal with your dead?” Forty-six framed books on display bear titles including “The Big Sleep” and “Finish Me Off.”

The project is presented alongside “The Graves,” presenting black-and-white images of tombstones installed on the floor, assembling photographs taken in a Californian cemetery during a trip made at the beginning of the artist’s career.

Works from the series “My Mother, My Cat, My Father, in That Order,” will also be exhibited, with new pieces added for the exhibition.

Showing for the first time in France since its conception in 2004 for the Centre Pompidou, “Exquisite Pain,” in the site’s Renzo Piano Pavilion, is split into two parts: “Before Pain” and “After Pain,” based on exchanges around suffering.

Dreamy works from nature-obsessed architect Junya Ishigami are on show at the Fondation Cartier in Paris, the largest solo exhibit held in the space for an architect. “Freeing Architecture,” features large-scale models built by the Japanese architect to explain his original, wide-ranging design and construction processes. Twenty of his projects from Asia and Europe are on show, including a house made for a young couple in Japan with plants growing in the floor. There is also the cloud-shaped House of Peace being built in the north harbor of Copenhagen.

Ishigami is known for knocking down the walls between his structures and their surroundings, bending a construction to fit the natural landscape, or even using the natural land to build something new, carving spaces into the soil, in one instance.

Across the road from the Fondation Cartier is the newly opened Giacometti Instutit, which sets out to give new perspectives on the artist’s work and the creative era from which it sprang. It includes a reconstruction of Alberto Giacometti’s tiny studio, replete with casts of extruded figures in plaster and clay, plus sketches on the walls. The contents — much of which has never been shown to the public before — had been conserved by his widow, Annette Giacometti.

The bijou, 3,890-square-foot institute, in an Art Deco mansion, also features temporary exhibitions. Through Sept. 16, there’s “The Studio of Alberto Giacometti by Jean Genet.” Jean-Paul Sartre introduced the two men in 1954, and the writer became a model for the artist, as well as a close friend.

Oeuvres on display at the institute, which has a library, too, are culled from the Fondation Giacometti, Paris that owns almost 350 sculptures, 90 paintings and more than 2,000 drawings, plus etchings and decorative objects created by the artist. 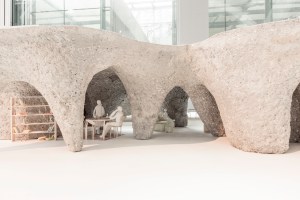