There were 2,000 journalists and 7,000 fans on site for Media Day, which has a reputation as a come-one-come-all media circus the athletes are forced to endure.

By Roxanne Robinson and Jessica Iredale on January 29, 2014
View Slideshow 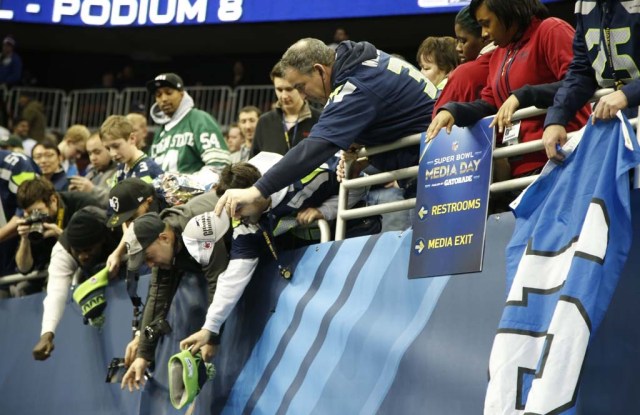 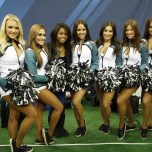 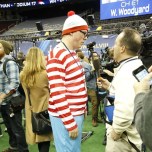 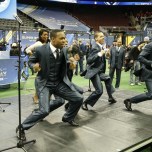 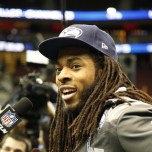 News flash: Peyton’s Sunday best — as in Super Bowl Sunday — is Zegna. But more on that later.

This story first appeared in the January 30, 2014 issue of WWD. Subscribe Today.

That felt like an existential question Tuesday at 9 a.m., shivering alongside legions of camera crews at the back door of the Prudential Center in Newark. Even more so once the NFL staffer at the media check-in desk repeated patiently for the third time that no one from WWD was on the list. Behind him, the nine-foot-tall visage of Bruce Springsteen plastered to the wall seemed to smirk.

There were 2,000 journalists and 7,000 fans on site for Media Day, which has a reputation as a come-one-come-all media circus the athletes are forced to endure. By making the controversial decision to stage the Super Bowl in New York/New Jersey, in/near the epicenter of the media world, the NFL tacitly invited that many more ancillary outlets to get in on the coverage — according to the NFL, 6,329 journalists are accredited to cover Super Bowl events here, a 21 percent increase over last year’s game — WWD among them. (After a short wait, the unflappable NFL staff politely granted access to basically all the unaccredited journalists.) In other words, WWD was at Media Day because we could be.

And not without a tenuous angle: New York Fashion Week, the fashion industry’s own biannual version of the Super Bowl, nearly overlaps with the real thing. The two events share some similarities and mutual marketing interests. See the Council of Fashion Designers of America’s and Bloomingdale’s football helmet collaboration; Saks Fifth Avenue’s spate of in-store events this week; Vogue’s February editorial featuring Jets and Giants players (the Broncos and Seahawks were busy) frolicking with Kate Upton on the field at MetLife Stadium. As press events go, Media Day and Fashion Week are feeding frenzies. Everyone wants a shot, a sound bite, a Tweet, an Instagram. Presumably the countless serious sports journalists assigned to cover the Super Bowl enjoy contending with this spectacle — i.e., the “personality” dressed as a superhero — as much as a fashion editor likes tripping to her front-row seat to find it being warmed by a tutu-wearing crasher who wandered down from the standing section. Except at Media Day there is no front row. Once every player and coach is trotted out to the podium for 60 minutes, all reporters are equal. Deion Sanders, looking dapper in a blue and gray pinstripe suit, and Regis Philbin had to vie for question time with the athletes alongside the Danish television correspondent who came dressed as Waldo — as in Where’s? — as a stunt because “Waldo is pretty international.” Was it funny? Ask a sports reporter.

There was Hank Azaria in a retro plaid blazer for the NFL Network; the Olympic gymnast Gabby Douglas reporting for “Inside Edition”; the Golden Sisters, the 78-something trio of reality stars from OWN, who were there on behalf of Queen Latifah; assorted blondes in tight and tacky dresses, and at least one man wearing colonial garb. Even weirder: the woman who was inexplicably barefoot on the turf. It didn’t appear to be an act of defiance from painful Jimmy Choos.

Unlike the starlets looking for press at a fashion show, athletes at Media Day are offered up with no protective publicist to deflect questions, no matter how serious or silly. Among the topics Peyton Manning had to field: rumors of his retirement, the meaning of Omaha, how his hair will affect the game and whether he will appear on “Saturday Night Live” this weekend.

With the bar set so low, there was no need to be embarrassed about lobbing a fashion question:

Peyton, Are you going to stay around for any fashion shows? If so who’s your favorite designer?

“I gotta talk to Coach Fox about the itinerary and the schedule,” said Manning. “I’m not sure he’s going to let us hang around. But on Sunday, I will say all the players know that a lot of cameras will be filming them at the game so you’ll see them wearing their Sunday-best suits. I’ll have a good-looking Zegna suit on.”

After the Broncos did their duty, the entertainment rolled out during an hour-plus lunch break for all. There were performances by the Rutgers Scarlet Knights marching band, the Jets Flight Crew cheerleaders, the Springsteen cover band Tramps Like Us and the cast of “Motown: The Musical,” for whom the stadium crew assembled a makeshift turf-level stage.

Then it was the Seahawks’ hour in the sun. Richard Sherman drew more cameras and reporters than Manning, and the cornerback didn’t seem to mind at all. Asked if he has a style icon, he said, “[Seahawks defensive back] Earl Thomas is a fashion icon. At any given day, any time, take a picture of him. I’m going to start taking pictures of him, of his fashion so people can keep up. I’m talking about matching from the hat to the shoes to the shirt. If he has green in his shoes, there’s green in his shirt. Earl Thomas is one of the fashion icons. Everyone should follow him.”

That was on the heels of a beauty-related question about Sherman’s dreadlocks and if they were “magical” in a Samson of the Old Testament, help-him-win-the-game kind of way, to which he replied, “Oh, I didn’t know the dreads played the game.”