The six-story hotel and club on North Green Street in the West Loop will be the largest property Soho House has opened to date. 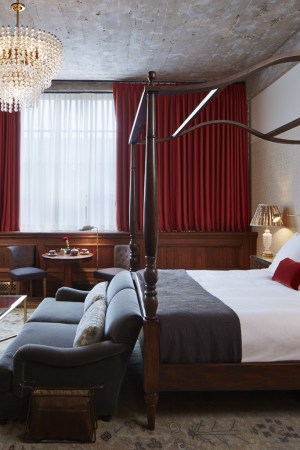 After two years of construction and, before that, years of searching for the right location, Soho House Chicago is finally gearing up for its much-awaited opening on Monday.

The London-based group settled on a unique location for the project: an industrial, turn-of-the-century machine belt factory on North Green Street in the West Loop. The six-story hotel and club will be the largest property Soho House has opened to date.

“It’s [been] a long time coming. I’ve been trying to come here for eight years. It’s a fabulous city,” says Nick Jones, founder and chief executive officer of Soho House Group. “We started [looking in] Gold Coast, then it became apparent that it wasn’t a right market for us. Fulton Market, in the Meatpacking District, seemed to be better. It’s slightly gritty and I love the warehouse.”

Spanning 108,000 square feet, the spot is brimming with amenities open to members and hotel guests: a 60-foot rooftop pool with panoramic views of the cityscape; a 15,000-square-foot gym replete with a boxing ring; a Cowshed spa; a soundproof library equipped with a stage for concerts, and a screening room to watch movies. It even has a drawing room.

Everything on the ground floor, the mezzanine and the garden level is open to the public. The spa, two of the restaurants — Pizza East and Chicken Shop — and a lounge, called The Allis after the family who originally owned the factory, is open to card holders and nonmembers alike. The lounge will serve fresh juices and smoothies by day and cocktails by evening. Chicago’s Soho House is the third North American outpost, following Miami Beach and West Hollywood, to have public areas. Everything above the second floor — the drawing room, library, the club floor and bar, restaurants and the rooftop pool — is members-only and for hotel guests.

Design director Vicky Charles says the challenge in tackling the project was not the size or age (it dates back to 1907) of the structure — but rather Chicago’s temperamental climate. “It snows so the materials have to last. We have black-and-white reclaimed stone tile on the roof. We had to make sure it didn’t crack and pop off the roof in the cold,” she says. “It took a long time to get them up there.”

The building itself was “easy to dress,” she says.

To keep the warehouse feel, the designers retained the brick exterior and exposed concrete interior. They extracted wood from the water tower of the original factory and repurposed it around the elevators in the lobby. Six enormous turn-of-the-century crystal and gold chandeliers, from a storied hotel in Paris, hang overhead in the lobby, the only sparkly element in a room filled with muted velvet and leather furniture and dark wood. On the club floor, floor five, there’s a 30-foot custom-built leather Chesterfield sofa, a piano, a DJ booth and a ping-pong table.

“None of us are purists in terms of design,” Charles says. “We decorate with things we love, whether it’s this era or that era.…Rather than [considering if] that’s Regency or that’s midcentury, we pull it all together and it works. But it needs to feel glamorous.”

Following Chicago, future openings include Istanbul by early next year, a second, all-private New York location on Ludlow Street next year, and Barcelona by the end of 2015 or early 2016.

“We’re targeting and in advanced negotiations in Amsterdam and Hong Kong. I’d love to do Tokyo, Shanghai and there will be more cities to come,” says Jones, noting that revenue for 2014 is expected to reach 180 million pounds, or $302.4 million at current exchange rates. “We just want to make sure our members are happy.”