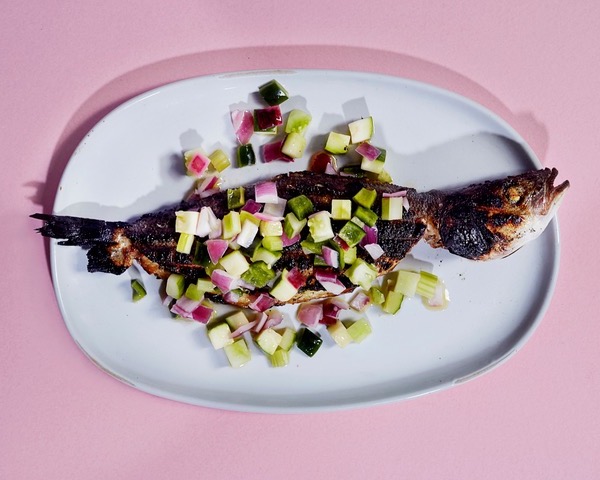 Bryce Shuman is all fired up.

The chef has opened his new restaurant, Sweetbriar, in the Park South Hotel in NoMad — and his New American menu is built around live fire cooking.

“Fire is where you really get a great flavor out of vegetables and meats,” Shuman says.

The chef’s previous restaurant, the Michelin-starred Betony, closed its doors in 2016. He’d been looking for a location to open a new fire-forward concept when he ran into a roadblock. “I was having a hard time finding a location that would permit that kind of cooking — and then the pandemic hit and my restaurant searching went out the window.”

Instead, he started a barbecue rib delivery service in Manhattan out of the back of his Subaru. ”Before we knew it, we had three cooks and four drivers, and we’re all over Brooklyn and Manhattan doing barbecue ribs and sides.”

The concept took off, and Shuman opened a BBQ pop-up, which benefited the Brooklyn Bail Fund. This past summer, he was presented with the opportunity to run the restaurant inside Park South Hotel. The kitchen was already equipped with a charcoal grill and wood-burning oven; he later added a smoker to the mix. “And I just felt like — this is what I was looking for,” he adds.

The menu includes a selection of pizzas prepared in the wood-burning oven, grilled plant-forward dishes like Hen of the Woods mushrooms and Bartlett pear with tarragon, as well as a whole fish and bone-in short rib. Smoked options include a half chicken and black pepper maple ribs. The cocktail menu, created by Ivan Papic (formerly of Macao Trading Co.) also makes use of and compliments the smokiness of the cuisine.

He found the inspiration for the restaurant’s name in the pages of “Spices and Herbs: Lore and Cookery,” an old book given to him by his father, an antique book dealer. Sweetbriar (aka, the Eglantine rose) spoke to a “magical, in the garden” ambiance and vibe that Shuman wanted to channel. The dining room interiors tap into that concept through rosy-hued banquettes and sage green velvet chairs; the bar is outfitted in rich green tones and accented by vintage flowerpots; floral pillows deck the lounge area.

The restaurant has a particularly unique attribute: an in-house band. The Sweetbriar Band, featuring Harlem-based musicians, will play a mix of rock and blues tunes during weekend brunch service, launching in the coming weeks.

A Look Inside Dowling’s at The Carlyle, the Hotel’s New Restaurant

Where to Eat in New York This Fall